Methane flux through the sea floor

The distribution and concentration of gas hydrates, ice-like compounds of water and gas (primarily methane), within the seafloor sediments of New Zealand's continental margins, is poorly constrained. On a global scale, seafloor gas hydrates are estimated to contain twice the volume of conventional hydrocarbon reserves (oil, gas, and coal). Being such a large-scale depository for methane - a greenhouse gas - they are of profound interest due to their likely link to global climate cycles. On a local or regional scale they can affect ocean-bottom slope stability, increase risk during conventional oil and gas drilling operations, and provide hydrocarbon resource development opportunities. Since the late 1970's, gas hydrates have been interpreted in marine seismic reflection data on all continental margins on Earth. Because they are stable at the pressures and temperatures found only in the upper 500 metres or so of the seafloor, they can often be identified in seismic data by a reflection which mimics the shape of the sea floor - a so-called bottom simulating reflection (BSR). This reflection is especially evident where it cross-cuts other geological features in the data such as bedding planes or faults. Off New Zealand, prominent BSRs have been seen in seismic data acquired on the Hikurangi and Fiordland continental margins.

Analyses of these extensive data sets is ongoing and has been funded by University of Otago Research Grants, ongoing support from the Ministry of Science and Innovation (formerly the Foundation for Research Science and Technology), and the Marsden Fund. Andrew Gorman, Miko Fohrmann and Gareth Crutchley were part of a long-term New Zealand based project - led by Ingo Pecher (GNS Science and Heriot-Watt University, Edinburgh) and Stuart Henrys (GNS Science) - to study gas hydrate occurrences on New Zealand’s active margin. Continued support from the Ministry of Science and Innovation has enabled this work to continue with analysis of new industry data and involvement in multinational research expeditions (including several visits of the German RV Sonne.) PhD student Douglas Fraser joined the team in 2010 to work on data from the southern Hikurangi Margin. MSc student Callum Bruce is looking at the hydrate system of the Reinga Basin of the NW coast of the North Island. A new PhD student, Jess Hillman, will work on a new Marsden-funded project on the Chatham Rise starting in late 2011. 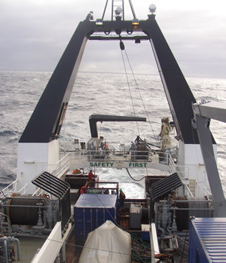 Looking out the back of the RV Tangaroa

Seafloor Methane on the Otago and Canterbury Shelf

The recent acquisition of the RV Polaris II has provided an opportunity to investigate links between methane flux in the seafloor and the stability of the continental slope along the southeastern coast of the South Island. This research which has been funded by a 2007 University of Otago Research Grant is assessing the undersea geology using a combination of high-resolution seafloor imaging, sub-seafloor soundings and direct sampling of seafloor materials. The shelf here is narrow and flat (~30 km-wide and <200 m deep) and then drops sharply to >1000 m. In this region, longshore currents are diverted seaward by the Dunedin volcanic complex that juts out from the coastline of the South Island. These currents carry sediment away from the coast and down off the shelf through a canyon system that feeds into the Bounty Trough. As these sediments descend to the trough, they pass into the region of gas hydrate stability which elsewhere has been linked to significant changes in the strength and nature of continental slopes. Assuming appropriate fluid flux in the area, we should be confident of finding signs of gas hydrate in the continental slope at water depths >600 m - even though there are no reported seismic indicators of the substance. This shallow seafloor research will complement existing knowledge of the deeper shelf comprised of the southernmost portion of the Canterbury Basin, a region that has been well examined by convention oil and gas seismic surveys. Hydrocarbon reserves have been proven and there is continued interest in the basin through a course of active research, but there has been no production to date. 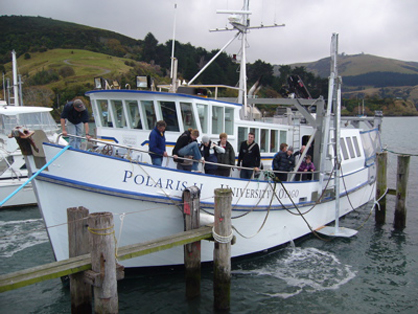 The Blake Ridge, a massive sediment drift deposit on the continental rise off the Carolina coast of the eastern US, is well known for its accumulation of gas hydrates. A high-resolution 3-D seismic reflection study and complementary 2-D survey were acquired during September and October 2000. The analysis of these data and the incorporation of results into the geological history of the region was the goal of Andrew Gorman's postdoctoral research at the University of Wyoming and it continues here at the University of Otago. (Also see Steve Holbrook's Blake 2000 research page at the University of Wyoming.) As part of the interpretation of the Blake Ridge seismic data set, Andrew has been working on 1-D waveform inversion techniques in order to extract thin-bed lithology information.