The University of Otago is in an enviable geographical position for its access to shallow seas of outstanding geological interest. Within a few hours cruise of Otago Harbour one can study a range of diverse topics.

A little farther away, we can reach other unique localities. 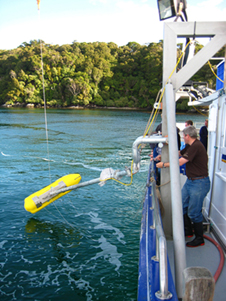 Gary Wilson lowers the chirp aboard the RV Polaris

The University of Otago’s research vessel, Polaris II, has three tools that are used for high-frequency seismic imaging of the seafloor and the geology below. The electro-acoustic sub-bottom profiler, or boomer, has been used by the department since the early 1990’s to record single-channel analogue seismic data on the continental shelf and South Island lake floors. This has been complemented and upgraded by the arrival of a new Teledyne-Benthos towfish in 2008. The new towfish contains a 1-10 kHz CHIRP sub-bottom profiler and an interferometric sidescan system (C3D). All three tools now can be recorded digitally and merged with location information from a variety of GPS and other positioning systems.

Six MSc theses from 1990 – 2002 were devoted to investigating the shelf of the SW New Zealand for a variety of geological targets. These projects made use of the former research vessel, Munida, and its boomer system. Funding from a 2006 University of Otago Research Grant enabled the digitisation and archiving of these data. A paper is currently in preparation. Ongoing work is improving our knowledge of the active offshore fault system running parallel to the coast of Otago.

In November 2007 and February 2009, the RV Polaris II cruised to Campbell Island, the southernmost of New Zealand’s subantarctic islands. Glacial features such as moraines have been imaged on the floors of Perseverance and Northeast Harbours. An extensive channel system has been imaged on the eastern shelf of the island. Datasets collected are currently being analysed. 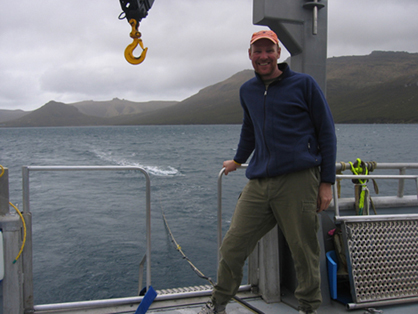 Andrew Gorman aboard the RV Polaris