The Alpine Fault running for >400 km along the west side of the South Island, is one of the most obvious manifestations of the transpressional Australian-Pacific plate boundary through New Zealand. During early 2009, the New Zealand Earthquake Commission funded the first detailed seismic experiment to characterise the geometry of the fault in the upper 2 km of the crust in the southern sector of the fault near Haast. Further seismic investigations are currently being planned for the central sector of the fault near Franz-Josef in association with other New Zealand researchers as part of an International Continental Scientific Drilling Program initiative called the Deep Fault Drilling Project.

The Ostler Fault is an active structure sub-parallel to the Alpine Fault, that accommodates components of shortening east of the plate boundary. However, its deep geometry is poorly constrained. Funded by a University of Otago Research Grant, seismic reflection data were collected early in 2006 to examine this feature at depth. Fault geometry, offsets of sedimentary horizons, and syntectonic sedimentation were analysed and compared with the geometry of seismic reflections. Our goal was to image the upper 5 km of the crust in this region to determine whether the fault is a high-angle, basement penetrating structure (associated with pre-existing tectonic features), or a low-angle plane detached at shallow depth (with no inheritance to previously existing features). 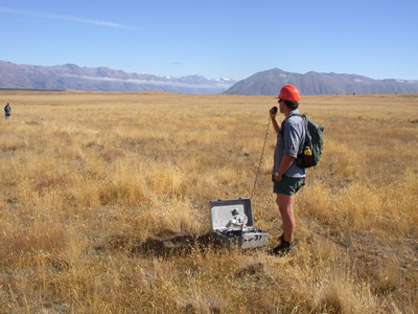 Seismic analysis of the tectonic setting for the McMurdo Ice Shelf, Antarctica

Reflection seismology has been used to characterise the sedimentary basin underlying the McMurdo Ice Sheet. Research is in conjunction with the ANDRILL project.

Using reflection seismology to characterise gold-bearing schist facies. This project is being undertaken in association with Oceana Gold Ltd and GNS Science.