Using seismic oceanography to image water masses within the ocean

Australasia's first seismic oceanography research group is providing detailed new images of the fine-scale (<10 m) mixing processes that occur between water masses at the Subantarctic Front east of the South Island. We are using seismic data to shed light on the physical and chemical processes that lead to mixing of water masses across this boundary. Maps and cross-sections of physical and chemical properties of the ocean are often inadequate because they are made by interpolating measurements collected by tools moored to stationary points on the surface or seafloor. The relatively new field of seismic oceanography produces high-resolution X-ray-like images of water masses using a technique similar to how ultrasound images a foetus. An abundant archive of about 40-year’s-worth of seismic data, collected primarily for oil and gas exploration, enables us to assess a range of chemical and physical oceanographic problems. 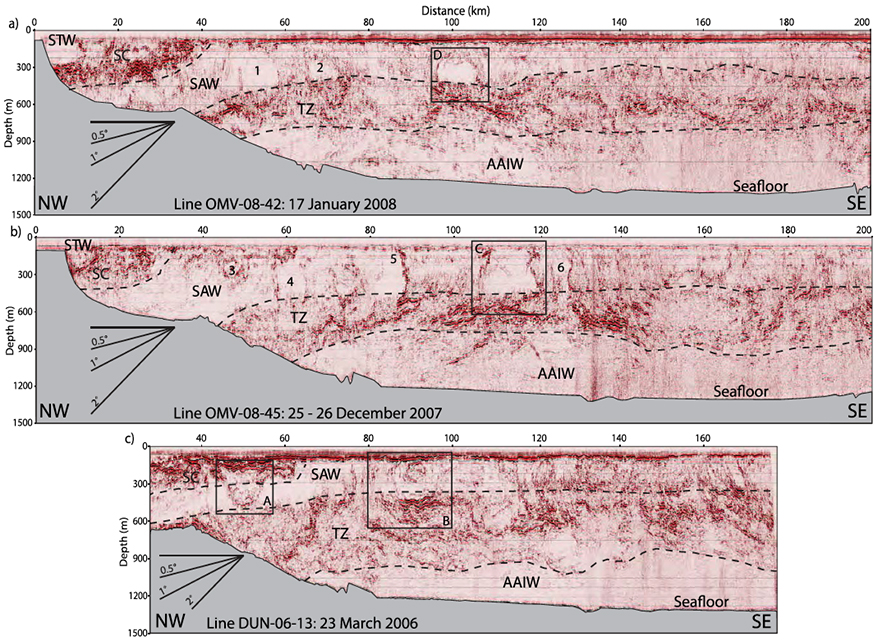 Above: Three seismic lines collected southeast of the South Island processed to reveal oceanographic features. The sections have been divided into water mass regions based on reflectivity. Dashed lines denote interpreted boundary locations. The Southland Current (SC, a manifestation of the Subtropical Front) and transition zone (TZ) are areas of higher reflectivity and are interpreted to represent areas of increased temperature variability. The continuous high-amplitude reflection seen at the surface in lines OMV-08–13 and OMV-08–42 has been identified as a surface layer (SL). STW, Subtropical Water; SAW, Subantarctic Water; and AAIW, Antarctic Intermediate Water. Ten possible eddy lenses are labelled. (Processing of these data made use of an academic licence for GLOBE Claritas.)

Maps of water masses – such as warm or cold currents and eddies – within the ocean provide critical information for assessments of fishery environments, weather forecasts, climate models, and evaluations of the economics and safety of resource extraction. Oceanographers routinely measure the properties of such water masses using tools that are dropped from stationary boats down to the bottom of the sea or attached to floating or seabed moorings, and then interpolate those measurements to produce cross-sectional interpretations. Our group makes use of the new field of seismic oceanography – an exciting recent development in marine science – to produce high-resolution ocean images that complement physical oceanography data.

A number of postgraduate research projects in our group have already explored aspects of seismic oceanography in New Zealand waters. Our first publication will soon be followed by others.