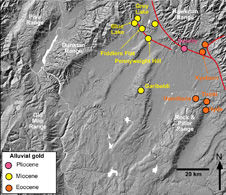 Map of Central Otago, with the principal faults (red) on the northeastern margin. Yellow localities are historic alluvial gold mines in quartz gravel deposits. The Kyeburn deposits are Eocene (~40 million years old) and the others are Miocene (~20 million years old).

Gold eroded from the vein systems and altered schist, such as the deposits at Oturehua and Macraes, accumulated with eroded quartz in old river channels. The most important such channels are those formed in the Miocene (about 20 million years ago). These gravels occur beneath the basins of Central Otago, and as uneroded remnants on the slopes of the mountain ranges. The gravels are common as small remnants along the Blue Lake Fault Zone. These have been extensively mined for gold historically, wherever they occur, and the most spectacular mine site is at Blue Lake. The Grey Lake mine is similar to Blue Lake. These, and the Fiddlers Flat alluvial gold mine, were developed in tilted Miocene quartz gravels resting on greywacke basement. Older (Eocene; ~40 million years old) deposits occur in the Hogburn Formation farther east, along a branch of the Waihemo Fault Zone in the Kyeburn valley, and at the northern end of the Rock & Pillar Range, especially between Hyde and Tiroiti. The Eocene gravels were deposited on top of the middle Cretaceous Kyeburn Formation, which has little or no alluvial gold accumulations. 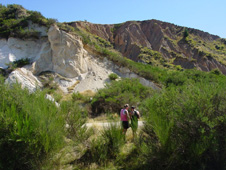 On a regional scale, the gold-bearing gravels occur close to the Waipounamu Erosion Surface. The Eocene gravels are immediately below the erosion surface, and rest on the basement unconformity. Bedding in the quartz gravels generally dips shallowly to moderately where it has been tilted by adjacent faults and/or folds. Miners pursued the gold at and near the base of the quartz gravels, where the richest gold accumulations occurred.

The Miocene gravels (Dunstan Formation) in Central Otago rest on the Miocene unconformity which is close to the Waipounamu Erosion Surface. Erosion and deposition of these gravels has slightly modified the Waipounamu Erosion Surface. River channels up to 50 m deep occur locally, although most relief is less than this. Alluvial gold occurs close to the base of the gravels, near the underlying unconformity. The gold-bearing sediments have been folded and faulted by structures along the northeast Otago margin, so the miners followed tilted or even vertical zones. Historic mining commonly ceased when excavations following the unconformity became too deep to work or drain water from. 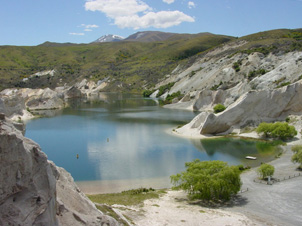 The Blue Lake alluvial gold mine, St Bathans, Central Otago. The Blue Lake Fault passes through this area, but is diffuse as it has caused shearing at several different rock boundaries. Gold was enriched near the boundary between the white quartz gravels (centre) and the greywacke basement that forms the hills to the right and in the background. 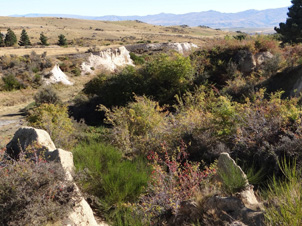 Pennyweight Hill historic alluvial gold workings, looking west. White cliff in the middle distance is remnant Miocene (20 million years old) quartz gravels dipping gently to the left (east). Pillars in the foreground are younger (Quaternary, <1 million years old) gravels that contain gold recycled from the Miocene sediments as they were uplifted and eroded on a branch of the Blue Lake Fault. Another branch of this fault separates the Miocene sediments from the schist slopes of Blackstone Hill in the background. 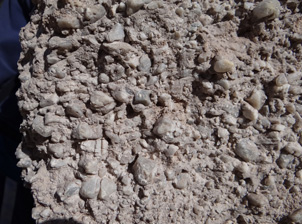 Gold-bearing Miocene quartz gravels at Pennyweight Hill historic alluvial gold mine. Pebbles are 1-2 cm across, and include both rounded and angular shapes. Angular pebbles were derived from erosion of pre-Miocene clay-altered basement at or near the Waipounamu Erosion Surface. Rounded pebbles were recycled, with gold, from pre-existing fluvial sediments. 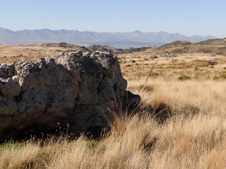 Large silcrete block (foreground) in a field of scattered silcrete boulders lying at the flat Miocene unconformity. The unconformity is on schist basement at the Waipounamu Erosion Surface, Garibaldi historic alluvial gold mining area. Background skyline is greywacke mountains uplifted along the Waihemo and Hawkdun Fault Zones on the Otago northeast margin.

Groundwater moving through the quartz gravels, as in the photograph above, dissolved quartz and redeposited as cement in some layers. This formed hard slabby outcrops when the rocks were uplifted and eroded, and these outcrops broke into blocks 10 cm to 2 m across. The resultant hard rounded boulders are called silcrete, or more informally, "sarsen stones". These silcrete boulders are scattered across the landscape wherever the quartz gravels have been eroded. Alluvial gold from the quartz gravels is also scattered across the landscape with the silcrete boulders, and this relationship was used extensively by early prospectors looking for new alluvial gold occurrences. The silcrete boulders are most prominent in Central Otago, where they are derived from Miocene outcrops, but the same processes affected all quartz gravel deposits back to the late Cretaceous.

Gold from both Eocene and Miocene gravels has been recycled by erosion during fault-related uplift between Pliocene (2-5 million years ago) and Recent. This recycling process can result in dilution of the gold content by eroded basement material. However, the earliest eroded material, as the basement is uplifted, is the thin veneer of gold-bearing sediments, so this gold and associated sediments occurs near the base of the new younger deposit. This type of gold concentration happened at Naseby, where Pliocene greywacke gravels are quartz-rich and gold-bearing at the base, from erosion of gold-bearing Eocene sediments. The recycling process has continued where the Pliocene gravels have been uplifted and eroded. The gold-bearing sedimentary intervals also contain abundant silcrete boulders derived from cemented Eocene quartz gravels, and these are recycled along with the gold into progressively younger gravels. 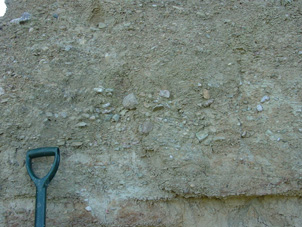 Pliocene gravels at Naseby, dominated by greywacke cobbles and pebbles (greenish brown). Layers rich in quartz (pale) are also enriched in gold and were mined historically. 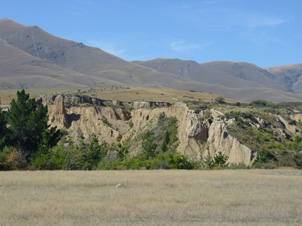 Pliocene gravels (brown) were derived from greywacke and semischist of the Kakanui Range (skyline) as it was uplifted along the Waihemo Fault (at base of steep slopes in background). The Pliocene gravels, which contain minor gold, have been tilted by on-going uplift along the fault. As the gravels were uplifted, gold was recycled into a thin veneer of younger gravels (dark with pale top, at top of outcrop). Historic miners have worked the gold accumulations at the base of the younger gravels, to leave a ledge at the boundary.