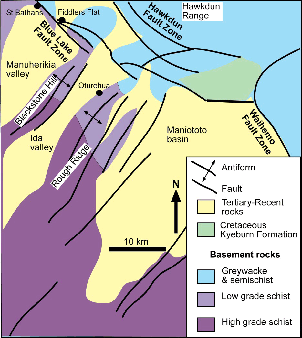 Regional geological map of the northeast margin of the Otago Schist belt, with the principal faults that separate the main basement rock types in the transition from greywacke to schist. This transition zone is narrowest at Fiddlers Flat (northwest corner) where the Blue Lake Fault Zone has juxtaposed thin slices of basement rocks. 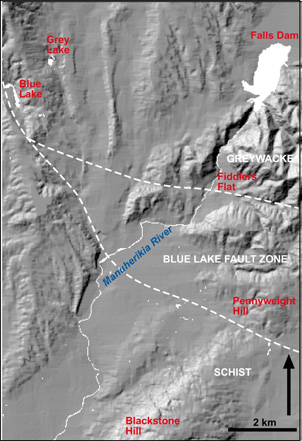 Location map for the Blue Lake Fault Zone in the Manuherikia valley. The fault zone disrupted the transition from greywacke to schist in the Cretaceous, and minor motion since the Miocene has disrupted sediments that overlie the basement. 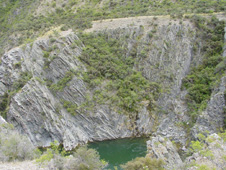 The fault zone consists of several structural slices of rocks of differing degrees of metamorphic modification. The lowest grade rocks are turbidites that are dominated by massive greywacke beds. These sediments have preserved clastic textures and sedimentary structures such as graded bedding, fine laminations, cross-bedding and rare flame structures and load casts. The greywacke/argillite proportion increases downstream (southwest) and outcrops become increasingly dominated by thin-bedded (10-40 cm) alternating argillite and greywacke beds. The argillite beds have been preferentially sheared and crushed by branches of the Blue Lake Fault Zone. Higher grade rocks in a transition to schist occur farther downstream.

Generalised cross section through the Blue Lake Fault Zone in the Manuherikia River gorge at Fiddlers Flat. The section is dominated by soft fault gouge zones between thin slices of basement rocks with different metamorphic grades in the transition from greywacke to schist. Photographs of the various rock types in this section are presented below. 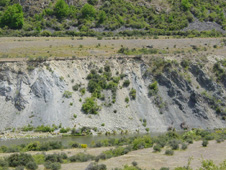 The various branches of the Blue Lake Fault Zone are defined by gouge zones that are hundreds of metres wide and constitute about 30% of the section in the Manuherikia River gorge near Fiddlers Flat. There are three main gouge zones in this section. In the main gouge zone at Fiddlers Flat, in the photograph below, the fault rocks consist of variably brecciated greywacke, and sheared argillite embedded in grey and black incohesive, fine-grained, clay-rich gouge. Gouge bodies up to 2 m across are partially cemented with calcite. The primary mineralogy of black gouge is quartz, muscovite, chlorite, smectite, kaolinite and minor albite feldspar. This fault zone separates the greywackes and argillites from a slice of broken formation rocks. The broken formation consists of uncleaved greywacke and conglomerate boudins (1-20 m scale) in a matrix dominated by sheared and weakly cleaved argillite. This deformation occurred during metamorphism in the Jurassic, and the rock slices were juxtaposed by normal faulting in the middle Cretaceous. 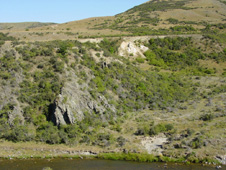 Broken formation (sheared greywacke; left) at Fiddlers Flat in the Manuherikia River gorge. White rocks in upper centre are Miocene sediments of the historical alluvial gold mine, and clay-altered greywacke immediately beneath the sediments. The boundary between sediments and basement (unconformity) dips gently to the right, and this zone contained the most abundant alluvial gold.

Miocene quartz gravels rest unconformably on some of the rocks of the Blue Lake Fault Zone. Rocks beneath the unconformity are variably altered to clays for up to 20 m below the sediments. The altered rocks and their veneer of sediments, where preserved, provide a useful marker for post-Miocene deformation of the area. This unconformity has been folded and faulted, but only on a scale of metres to tens of metres. At Fiddlers Flat, Miocene quartz pebble conglomerate, sand and silt of the basal Dunstan Formation overlie the clay-altered unconformity on the broken formation (see photograph on right). The sediments are preserved as a shallow syncline adjacent to a branch of the Blue Lake Fault Zone. The unconformity beneath the sediments has been mined for alluvial gold historically, and alluvial gold recycled from these rocks still makes its way into the main Manuherikia River.

Broken formation rocks are separated from semischists by another major fault and gouge zones, and yet another one farther downstream juxtaposed semischist against low grade schist. Semischists consist of pale weakly schistose sandstones and darker weakly schistose argillites, interlayered on the metre scale. The foliation has been locally enhanced and disrupted by parallel metamorphic quartz veins. The combination of structural transposition and quartz vein emplacement has resulted in prominent colour-banding in many outcrops. Schist occurs at the southwestern end of the Manuherikia River section, downstream from Fiddlers Flat. The main metamorphic foliation has been extensively deformed on the 10 cm to metre scale by recumbent tight folds, and a late metamorphic fabric is particularly strongly developed on attenuated fold limbs, where it locally dominates the fabric at outcrop. Numerous folded and planar metamorphic quartz veins dominate outcrops. 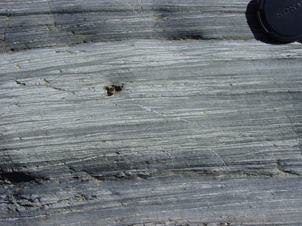 Outcrop of a slice of semischist that has been juxtaposed against greywacke broken formation by a branch of the Blue Lake Fault in the Manuherikia River gorge immediately downstream of Fiddlers Flat. 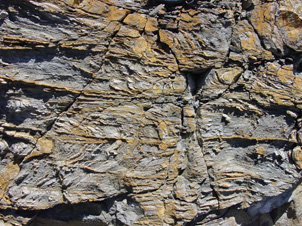 Outcrop of a slice of low grade schist that has been juxtaposed against semischist by a branch of the Blue Lake Fault in the Manuherikia River gorge downstream of Fiddlers Flat.

The Blue Lake Fault Zone was reactivated in the Miocene, in narrow (cm to m scale) faults with metre scale reverse offsets. These offsets locally affected the deposition of fluvial and lacustrine sediments of the Manuherikia Group (Dunstan and Bannockburn Formations), and facilitated growth of stromatolites on a paleo-lake shore at a fault scarp in basement schists. On-going deformation caused stromatolite death and redeposition in this setting. Miocene-Recent deformation has caused, and continues to cause, minor folding and faulting (1-100 m scale) of the basement topography and overlying Miocene sediments. 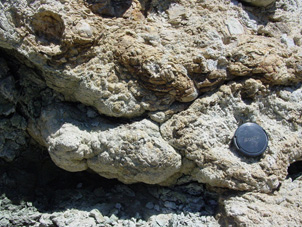 Stromatolites (algal encrustations) in the Miocene Bannockburn Formation. These stromatolites accumulated on a low grade schist fault scarp when a branch of the Blue Lake Fault was reactivated as a reverse fault in the Miocene. 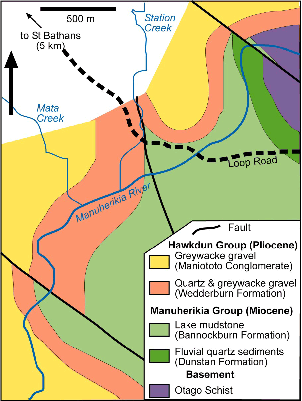 Geological map of the Blue Lake Fault Zone cutting sediments downstream of the Fiddlers Flat gorge of the Manuherikia River.<

The rest of the Blue Lake Fault Zone in this river section lies beneath the Miocene and Pliocene sediments that rest on the schist basement. These sediments have been disrupted by folding, tilting and faulting along the Blue Lake Fault Zone, and some additional branches of the fault zone have caused offset of the sediments on the 10 metre scale, as shown in the map below. The sedimentary sequence exposed here reflects a transition from Miocene Lake Manuherikia, in which greenish-brown mudstones were deposited, to a Pliocene (2-5 million years) braided river plain dominated by gravels derived from the rising greywacke ranges to the north, including the Hawkdun Range. The intervening Wedderburn Formation includes quartz gravels recycled from the Miocene Dunstan formation as it was uplifted and eroded from the greywacke mountains.