Crustal structure and topography of the Otago northeast margin 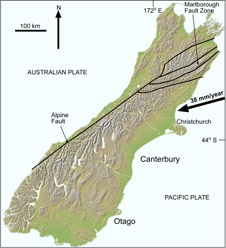 Topographic map of the South Island (from http://www.geographx.co.nz) with the main faults at the Pacific-Australian tectonic plate boundary. Topography of the Otago area is distinctly different from that of Canterbury.

The rocks, landscape, and geology of gold deposits in Otago are distinctly different from Canterbury to the northeast. These differences are a direct result of differences in the underlying crustal structure, and these differences were set in place more than 100 million years ago, during the Rangitata Orogeny (mainly Jurassic) and subsequent uplift of the rocks exposed at the surface today. The uplift and exposure of the rocks currently at the surface occurred mainly in the middle Cretaceous (110-120 million years ago), with relatively minor erosion occurring subsequently.

The Otago crust is dominated by the thick pile of Otago Schist, which is a relatively weak rock, especially at depth in the crust (>10 km) where it is hot and flows readily during deformation. The schist is strongly laminated by abundant oriented micas that define the gently dipping foliation layering over large areas of Otago. In contrast, Canterbury has strong thin greywacke crust with even stronger rocks at depth beneath the greywacke. The difference in crustal strength affects the modern topography, which is a result of deformation of the South Island at the Pacific-Australian plate boundary . Most of this deformation occurs along the Alpine Fault, but some is transmitted right across the South Island.

The differences in topography between Otago and Canterbury are apparent on the map above. Otago is a relatively wide zone of low mountain ranges and intervening basins. The mountain ranges have gentle slopes over most of Otago, and become progressively higher and more rugged towards the northwest, into the southern part of the Southern Alps. In contrast, Canterbury has a relatively narrow belt of high greywacke mountains, the main Southern Alps, with a broad expanse of gravel plains in front of them to the southeast. The greywacke basement beneath the Canterbury plains is still below sea level, as it has been for at least 50 million years. Canterbury topography changes north of Christchurch because of the effects of the Marlborough Fault Zone, at the northeast end of the Alpine Fault. 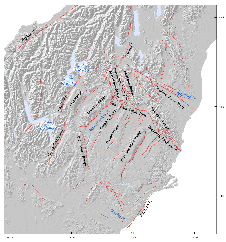 The differences in crustal structure between Otago and Canterbury result in a complex structural transition zone between the two areas. This transition zone is defined by a set of faults that trends northwestwards, immediately south of the Waitaki River, as shown on the map below. These faults include the Waitaki Fault Zone, the Waihemo Fault Zone, the Hawkdun Fault Zone, and the Blue Lake Fault Zone. These faults developed as extensional structures between the two different types of crust, when the Otago Schist was being uplifted and exposed in the middle Cretaceous (about 110-120 million years ago). Some of these faults have been reactivated in a reverse sense over the past 10 million years, and many of them are active now. The Waihemo, Hawkdun, and Blue Lake Fault Zones and related structures have been particularly important for development of Otago’s topography and gold geology on Otago’s northeast margin.

This difference in Cretaceous crustal structure has affected the modern uplift pattern as well. The crustal boundary between Canterbury and Otago extends northwards into what is now the main uplift zone of the Southern Alps. The highest mountains and the most active modern gold deposit formation in the Southern Alps is occurring in this structurally complex zone.