Faulting and erosion of the Macraes gold deposit

Faults at the Macraes gold deposit

The Horse Range Formation, river sediments formed about 112 million years ago, contains the first sedimentary evidence of erosion of the Otago Schist in East Otago. This erosion was driven by tectonic movements associated with regional extension of the crust that gave rise to the structural difference between Otago and Canterbury.  Extension-related exhumation in the schist belt in the middle Cretaceous occurred partly along shallow-dipping normal faults, including the Footwall Fault at Macraes gold mine (see cross section below). This deformation tectonically disrupted the lower portion of the Hyde-Macraes Shear Zone, so that the current exposure of this shear zone is truncated at its base by a normal fault, the Footwall Fault. The location and amount of mineralised rock tectonically separated from the present exposure is unknown, and this rock has probably been eroded from the footwall of the fault.

Generalised cross section through the Hyde-Macraes Shear Zone at Macraes gold mine. The gold was introduced during thrust fault deformation in the Jurassic (~140 million years ago), as indicated with the red zone at the base of the low grade schist block. This zone was subsequently cut by a normal fault, the Footwall Fault (green) in the middle Cretaceous, at the same time as the Waihemo Fault Zone was initiated. This later normal fault motion, and associated erosion of faulted topography, was responsible for exposing the gold-bearing zone at Macraes.

Tracing the history of Macraes uplift

Erosion of the Macraes gold deposit can be tracked using related rocks as tracers. In particular, textures in detrital quartz grains provide useful insight into erosional history of the Macraes area. Almost all the Otago Schist contains thoroughly recrystallised quartz, which in microscope view appears as equant interlocking quartz grains. In contrast, quartz in the Hyde-Macraes Shear Zone commonly shows evidence of post-metamorphic ductile deformation, with elongate grains and minor subgrain formation. Likewise, some rocks along the post-mineralisation Footwall Fault zone also show evidence of similar ductile deformation of quartz, with similar quartz textures. These distinctive quartz textures are shown in photographs below. 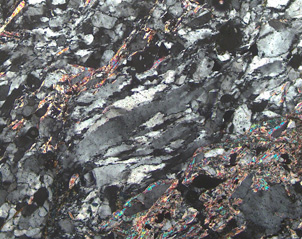 Microscopic view of schist associated with the Footwall Fault. The quartz grains (shades of grey) have been elongated by ductile deformation in the centre of the picture. This distinctive texture also occurs in the gold-mineralised Hyde-Macraes Shear Zone. More equant grains, typical of nearly all the Otago Schist, are on the left of the picture. 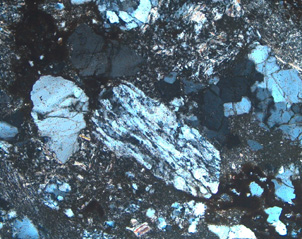 Microscopic view of a quartz pebble (2 mm) from the Otago Schist, in the middle Cretaceous Horse Range Formation formed along the Waihemo Fault Zone. The pebble has quartz grains that are elongated by ductile deformation that occurred either in the Hyde-Macraes Shear Zone or the Footwall Fault. This is the earliest evidence of sediment derived from this part of the schist belt. 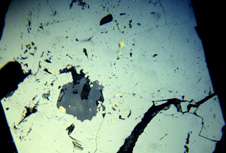 Microscopic view of gold grains (maximum size is 0.01 millimetres) inside a grain of arsenopyrite (FeAsS) in the Hyde-Macraes Shear Zone at Macraes gold mine.

Despite the strong evidence for erosion of the Macraes gold deposit in the middle Cretaceous, there are no middle Cretaceous gold placers in the area. Only minor detrital gold occurs in modern streams draining the Horse Range Formation, and no placer gold has been worked in the Horse Range Formation itself. The lack of observable gold in this deposit is almost certainly a result of lack of liberation of the gold from enclosing rocks. Macraes gold is typically extremely fine grained and enclosed in sulphide minerals (micron scale), as shown in the photograph below. Coarser gold grains do exist at Macraes, but they are relatively rare, and more than 90% of the gold occurs as in this photograph.

By the Late Cretaceous, relief in Otago was less pronounced than it was in the middle Cretaceous, and sedimentary processes were less dramatic. The coarse grained angular gravels derived from fresh schist, semischist, and greywacke outcrops that dominated the middle Cretaceous became progressively less common. Instead, sedimentation was dominated by finer grained and rounded quartz pebbles, accompanied by sands, silts and coal. Groundwater passing through these sediments caused alteration of schist cobbles and underlying schist to kaolinite clay. These processes helped to decompose sulphide minerals in the sediments and underlying schist, and release any contained gold. Gold underwent chemical dissolution and reprecipitation to form a smaller number of larger grains, as in the photograph below. This grain, in a quartz vein in the schist, would form an alluvial gold flake about 1 mm across when hammered in a stream. 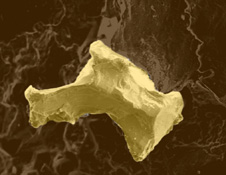 Scanning electron microscope view of a gold grain (0.3 mm across) that has formed during oxidation of gold-bearing sulphides (pyrite and arsenopyrite) in clay-altered schist near the boundary between schist and overlying sediments. This coarse-grained gold formed at least 20 million years after the gold-bearing veins were first exposed in East Otago.

There was therefore at least a 20 million year time gap between first erosion of the Macraes gold deposit and the beginning of accumulation of alluvial gold in Central Otago. The 20 million year time lag between initial erosion of basement gold deposits and subsequent alluvial gold deposit formation represents the time taken for evolution of the landscape and the sedimentary system to an environment that could liberate the gold from the sulphide minerals. Once the gold particles had reached a critical size (e.g., the picture above), they formed alluvial deposits that were repeatedly recycled through the geological record to the modern streams. Further chemical grain size enhancement occurred during this recycling process as well.