Gold and arsenic in pyrite

Pyrite is the most common metallic mineral in the basement rocks in Otago. The ideal formula for pyrite is FeS2, but both the iron and the sulphur can be replaced in the crystal structure by other elements, mainly metals. Iron is commonly replaced by small amounts of metals such as lead (Pb), zinc (Zn), and nickel (Ni). Gold (Au) and silver (Ag) can also be present in pyrite, probably replacing iron. Sulphur is typically replaced by metalloids such as arsenic (As), and antimony (Sb). Other elements such as tungsten (W), tellurium (Te), and molybdenum (Mo) are commonly enriched in gold deposits, and these can occur in pyrite as well. Since pyrite is such a common mineral, examination of the nature and amounts of  these trace elements can help comparison between different rocks, and can yield information on potential sources of the gold that was concentrated in gold mines.

Gold and arsenic at Macraes gold mine

Pyrite grains at Macraes have had complex growth histories, as the deposit developed under a range of different structural and physical conditions, during uplift and cooling of the schist belt. Gold accompanied several stages of pyrite growth. Some of this gold occurs as separate gold grains, whereas some gold is “invisible” in the crystal structure of the pyrite. The image below shows evidence of multiple growth generations of pyrite. 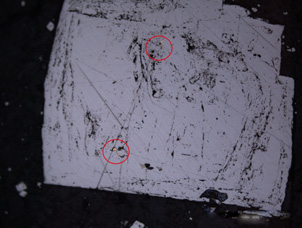 Microscopic view of a pyrite grain (1 mm across) from Macraes gold mine, with small inclusions of gold (in red circles). Dark lines within the grain represent small mineral inclusions trapped at different stages of pyrite growth. The grain has grown with broadly concentric zones, with the final outer crystal shape somewhat different from earlier stages. 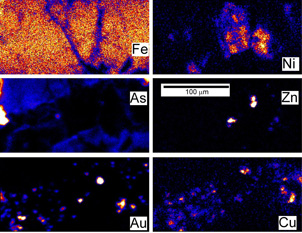 PIXE (proton-induced X-ray, by C Ryan) images of a pyrite grain from Macraes mine, with all images of the same area. A range of metals is detected in the structure of the crystal, as labeled in each image. These metals are distributed inhomogeneously, indicating that the grain had a complex growth history.

The Macraes gold mine, like most similar gold mines, is strongly enriched in arsenic as well as gold. The main arsenic mineral is arsenopyrite (FeAsS), and this mineral is commonly intergrown with pyrite grains. However, there is also some arsenic distributed through the pyrite. In the images below, pyrite makes up most of the view, but a small grain of arsenopyrite occurs at the far left centre, as indicated in the As image. Small amounts of arsenic are irregularly distributed through the pyrite structure (blue colouring). Some nickel enrichment also occurs locally, in As-poor parts. Zinc, copper and Au signals are all from small inclusions of sphalerite (ZnS), chalcopyrite (CuFeS2) and gold, respectively.

The amount of arsenic can be determined by laser-ablation ICP-MS analysis, and this analysis can also give an indication of the amounts of other metals. The images below show the distribution of gold and arsenic in a pyrite grain. There is clear zonation of gold and arsenic, following the broadly concentric shape of crystal growth zones seen under the microscope. In addition,W, Ni, Co and Bi are also weakly enriched in the Macraes pyrite, also with concentric zonation. 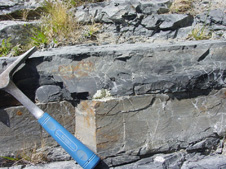 Photograph of outcrop in the Manuherikia River gorge at Fiddlers Flat, showing sedimentary bedding with greywacke (sandstone) at bottom, and argillite (mudstone) at top

One potential source for gold and other metals for the Macraes deposit, and other Otago gold deposits, is the surrounding basement schist and lower grade rocks. These metals could have been extracted from a large volume of rock and focused into a narrower zone of metal-rich rock. Metamorphic hot fluids are the most likely mechanism for this. If this process is plausible, there should be some signs of initial accumulation of metals in the rocks that ultimately became the schist hosts for the gold deposits. The following account describes metal contents of pyrite from the Manuherikia River gorge at Fiddlers Flat on the northeastern margin of the schist belt. The rocks with lowest metamorphic grade in this section are greywackes and argillites, as in the photograph below.

The low grade rocks almost all contain scattered pyrite which is very fine grained (micron scale). The pyrite has grown in the rocks on the sea floor, and has therefore grown across the sedimentary textures of the rock. The pyrite mainly forms spherical clusters of grains called framboids, with each cluster made up of hundreds of micron-sized crystals. Some of these framboids have their micro-crystals merged to make a denser mass of pyrite. The following images show that the framboids contain small but detectable amounts of gold, around 1-10 part per million, that is similar to gold contents in pyrite at Macraes gold mine. Arsenic is enriched in the framboids, but not to the same extent as the Macraes pyrites. Zinc, lead and molybdenum contents of the framboidal pyrites are much higher than at Macraes. Framboids in greywacke (sandstone) has similar compositions to those in argillite (mudstone), although the Mo content of sandstone framboids is a little higher. 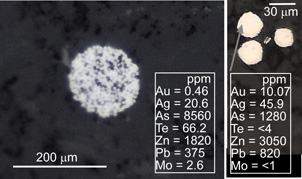 Microscopic view of clusters of minute pyrite grains (white, framboids) in argillite at Fiddlers Flat. Laser ablation ICP-MS analyses of the framboidal clusters show that they contain from 0.5 to 10 parts per million gold and more than 1000 ppm arsenic. 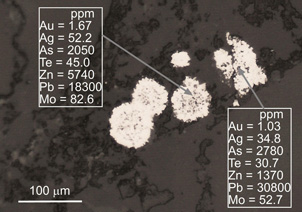 Microscopic view of clusters of minute pyrite grains (white, framboids) in sandstone at Fiddlers Flat. Laser ablation ICP-MS analyses of the framboidal clusters show that they contain from ~1 ppm gold and more than 2000 ppm arsenic. These framboids are also enriched in molybdenum.

The analyses of framboids from the low grade rocks suggest that these rocks could have provided a source for gold and arsenic in gold deposits in schist. The process for mobilizing and concentrating these elements is not fully understood, but a generalized scheme is indicated in the cartoon below. The metals are mobilized in this scheme by the transformation of pyrite to pyrrhotite (FeS), which is the dominant form of iron sulphide at high metamorphic grades. This transformation is known to begin at slightly higher metamorphic grades than has affected the greywackes and argillites. The transformation of the greywackes and argillites to schist, in the sequence seen in through the Blue Lake Fault Zone, includes the key transformation reactions in the rocks that could have mobilized gold and arsenic. The Pb and Zn apparently stayed behind in the low grade rocks. The Mo in the gframboids was locally mobilized by metamorphic processes, as indicated by rare Mo-rich rocks at higher grade (picture below). Tungsten, which is strongly enriched at Macraes, was apparently derived and concentrated by other processes. 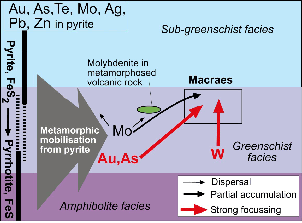 Cartoon showing mobility of metals in the Otago Schist during metamorphism. Metals were released from pyrite as that pyrite was transformed to pyrrhotite under low grade metamorphic conditions (250-400°C). Gold and arsenic were concentrated in gold deposits such as at Macraes mine. Tungsten (W) enrichment at Macraes was derived from elsewhere in the schist pile, not from low grade pyrite. Minor amounts of molybdenum also became concentrated at Macraes mine, but most Mo dispersed. The following photograph shows localized metamorphic concentration of molybdenum associated with igneous rocks, not gold deposits. 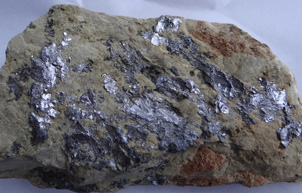 Molybdenite (MoS2, shiny grey flakes) in an epidote-rich schist associated with mafic and ultramafic igneous rocks in the schist of the Southern Alps. Sample collected by AF Cooper.