Graphite and gold on the northeast schist margin

Graphite at Macraes gold mine 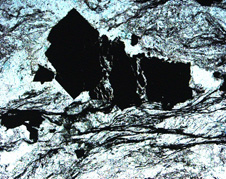 Microscopic view of pyrite (FeS2) and arsenopyrite (FeAsS) grains (black, 2 mm across) in ore grade schist from Macraes gold mine. The gold occurs as micron sized grains in the pyrite and arsenopyrite. Thin black seams are rich in graphite that was introduced into the rock by hot water during deformation.

Gold and graphite are closely associated in many gold deposits around the world, and the graphite is commonly thought to have played a role in causing the gold to deposit in the rocks. Hence, rocks rich in graphite are potential targets for gold exploration, especially in schist belts such as Otago Schist. The large Macraes gold deposit near the northeastern margin of the Otago Schist belt displays this close association between gold and graphite (see photograph on right). The strong enrichment of the rocks with graphite at Macraes is one of the defining features of that gold deposit. Hence, graphite-bearing rocks in this area are of considerable interest, for gold exploration, and also to help to understand the processes of graphite enrichment and potentially associated gold enrichment.

Graphite-rich rocks are rare in the Otago Schist, and they are typically poorly exposed at the surface because they crumble on weathering. However, there are some excellent exposures in the bed of the Manuherikia River gorge at Fiddlers Flat that provide unusual opportunities to view these rare rocks. The graphite is found in rocks of different metamorphic grade in a tectonically thinned transition from greywacke to low grade schist, as in the following sketch section. The graphite occurs in micaceous schists and in shear zones that formed as the rocks were being metamorphosed. The highest grade schists in this section are similar to those that host the Macraes gold mine.

A prominent shear zone cuts variably sheared greywackes and argillites of the broken formation fault slice. Graphitic shears bend around resistant blocks of sandstone and conglomerate which are embedded in sheared greywacke and argillite, as in the photograph below. The blocks are separated by black foliated graphitic gouge, which forms polished surfaces on the blocks. The polished surfaces also contain smears of metamorphic quartz, muscovite and chlorite. Graphite occurs in veins that fill mm-scale fractures in sandstone blocks as well. This vein graphite forms lenticular masses up to 2 cm across. 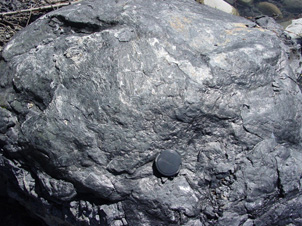 A large sheared block of greywacke in a late metamorphic (Jurassic) shear zone in the broken formation fault slice at Fiddlers Flat. The block is covered with sheared graphite-rich material that was introduced into the rock with hot water flowing during deformation. 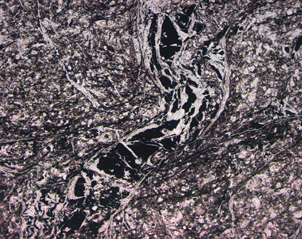 Microscopic view of a vein (1 mm wide) with graphite (black) and quartz (white) cuts across sheared greywacke in the broken formation fault slice at Fiddlers Flat. 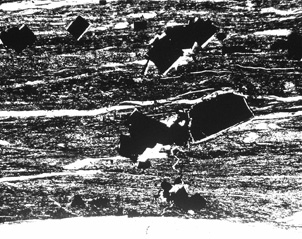 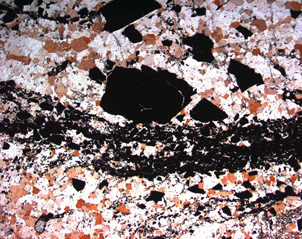 Microscopic view of a quartz vein (brown and white grains) in a late metamorphic shear zone (Jurassic) in the semischist faulted slice downstream of Fiddlers Flat. Dark horizontal seams are largely graphite aligned in the shear foliation. Large black blobs are graphite as well. This graphite was introduced via hot water but has since been recrystallized.

Narrow ductile shear zones with deformed quartz veins cut across the foliation in the semischist fault slice, downstream of Fiddlers Flat. The margins of these ductile shears have been brecciated in a brittle manner, and the breccias have been partially reactivated to form soft gouge that is part of the major nearby Cretaceous normal fault zone. The  ductile foliation is strongly defined by graphite-rich seams, with grains that range in size from micron-scale dusty material to 0.3 mm. Large graphite grains occur in the recrystallised vein quartz, where they are up to 1 mm across. Brecciated margins of graphitic quartz veins have been cemented with finer grained graphite, and graphite cement protrudes beyond the breccias as delicate encrustations.

All the graphite in these shear zones was ultimately derived from fragments of carbonaceous material that accumulated on the sea floor with the greywacke and argillite sediments, probably in the Triassic (200 million years ago). The fragmental organic carbon was dissolved and transported by hot fluids during metamorphism of the sediments to schist, in the Jurassic (150 million years ago). The carbon was transported as methane and carbon dioxide, and graphite deposition results from mixing these, and interaction with the rocks, probably during lowering temperature. The carbon was redeposited as coarser grained graphite, especially in the shear zones (as in above photographs) along which fluid flowed most readily. This carbon mobility occurred through >50 million years of evolution of the metamorphic belt, from development of sheared argillite in the Jurassic, and was still happening when the middle Cretaceous extensional faults developed about 110-120 million years ago. These processes resulted in disseminated gold at Macraes that initially developed in pyrite and arsenopyrite grains hosted by a weakly graphitic foliation. On-going deformation, both ductile and brittle, resulted in remobilisation of gold, sulphides, and graphite.