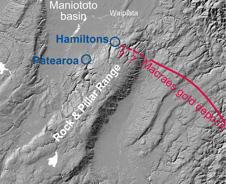 Patearoa is located on the slopes of the Rock & Pillar Range. The Hyde-Macraes Shear Zone (red line) in the basement schist hosts the world-class Macraes gold mine. This structure may continue to the northwest on the Rock & Pillar Range (dashed red line), although no gold-bearing schist has yet been found in this area. Erosion of the gold-bearing schist may have contributed to the rich alluvial gold of the region.

Patearoa is an historic gold mining area on the southern edge of the Maniototo Basin. The goldfield lies on the northern slopes of the actively rising Rock & Pillar Range, near to the historic Hamiltons Diggings alluvial gold mining area. The gold at Patearoa has been concentrated in gravel deposits (=alluvial gold) that accumulated in alluvial fans on the slopes of the actively rising Rock and Pillar Range. The on-going uplift over the past million years caused erosion of early-formed gravels, and the gold has been recycled into progressively younger gravel deposits, and into modern streams.

The ultimate source of the gold

The Macraes gold deposit occurs in a complex fault zone in the Otago Schist basement. The fault zone formed between 100 and 140 million years ago. The Macraes fault zone may extend across the Rock & Pillar range, but no gold has been found in this portion. The Macraes deposit contains at least 9 million ounces of gold, more than the historical alluvial gold production from Otago.
Erosion of the Macraes deposit, and other similar deposits, released gold grains into rivers that transported the gold all over Otago. Repeated winnowing of the gold-bearing sediments over 100 million years formed quartz-rich gravels that are now preserved in scattered places over Otago. Hamiltons Diggings has some remnants of 40 million year-old quartz gravels, and 20 million year-old quartz gravels occur on the west side of the Maniototo valley. These quartz gravels contain abundant gold, especially where they rest on the schist. That schist has been altered to clay by groundwater. Groundwater has also cemented some of the quartz gravels to make hard blocks, called “sarsen stones” or “Chinamen” by early miners. These blocks were a good indicator of nearby gold on eroded hillsides. Erosion of these remnants of old quartz gravel deposits during recent uplift of the Rock & Pillar Range was an important local source of gold in younger gravels. 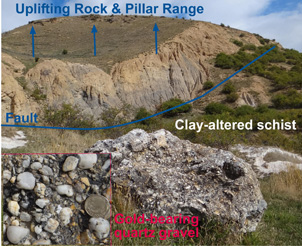 Hamiltons Diggings, on the northern slopes of the Rock & Pillar Range. A prominent fault zone has been exposed by sluicing of the hillsides by historic gold miners. The miners were extracting gold from remnants of 40 million year old quartz gravels which rest on clay-altered schist basement (white scar at centre right). Where the quartz gravels have been cemented by groundwater depositing quartz, the resultant material was too hard to sluice and was left as large boulders (foreground). 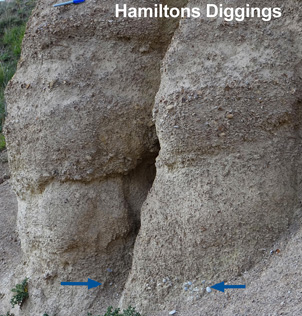 Young gravels (last 500 000 years) have been deposited on the slopes of the Rock & Pillar Range at Hamiltons Diggings. These young gravels were eroded from the actively rising slopes of the range, and consist of a combination of angular schist debris and rounded quartz pebbles (blue arrows) derived from the old quartz gravels. The presence of the rounded quartz pebbles is an important indicator of the potential presence of gold that has been recycled from the older gravels, and the outcrop in this photograph was created by sluicing activity during historic mining

The smooth surfaces on the Rock & Pillar Range are remnants of a 40 million year old erosion surface cut into schist bedrock, on which ancient gold deposits accumulated in quartz gravels. Steep schist gorges have formed as the range has been rising along faults over the last million years. Debris from this erosion formed gold-bearing gravel deposits at the base of the range (smooth lower slopes around Patearoa). Some of these gravels have been uplifted, and then eroded by modern streams.

Oblique view of Patearoa area, seen from the north. The Rock & Pillar Range is made up of schist basement, and the foreground consists of gravels of varying ages. Principal faults responsible for range uplift are indicated in yellow.

Initial erosion of the ancient quartz gravels and the underlying clay-altered schist resulted in fine grained gravels that contain a mixture of angular schist and rounded quartz pebbles, and these gravels also contain gold recycled from the quartz gravels, as at Hamiltons Diggings. The mixed gravels were an important target for miners at Patearoa and elsewhere in Otago. Gold accumulated particularly above silty horizons, and above the schist basement. The rounded quartz pebbles (arrowed in photograph) indicate gold-bearing horizons, and these were targeted by miners in sluicing operations and in underground tunnels. 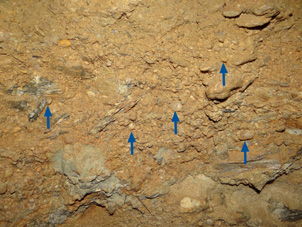 Gold-bearing gravel in an underground mine at Patearoa. This horizon is about 1 m thick and contains the characteristic rounded quartz pebbles (~1 cm, blue arrows) that indicate derivation from older gold-bearing quartz gravels. 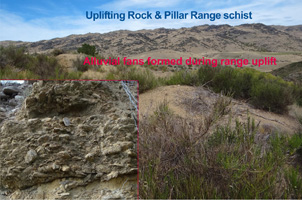 Coarse grained angular schist debris in young gravels on the margin of the Rock & Pillar range at Patearoa. These gravels contain only minor amounts of gold, and were removed by sluicing to expose richer horizons.

On-going erosion of the Rock & Pillar Range schist yielded abundant coarse debris that formed thick alluvial fans on the range margins. These gravels include some gold from remnants of the ancient quartz gravels and uplifted mixed fine gravels, but gold has generally been diluted by the large volume of schist debris. The coarse schist gravels have been cemented by clays, and form the steep cliffs around Patearoa. These cliffs were made during gold mine sluicing operations. 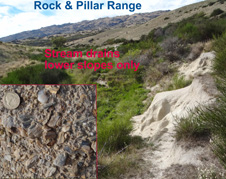 Modern stream that is draining the lower slopes of the Rock & Pillar Range at Patearoa. The gravel in the stream contains some schist debris from older gravels, and some rounded quartz pebbles indicative of gold potential. There was sufficient gold in this stream for historic miners to work the main channel.

Many of the modern streams from the Rock & Pillar Range have cut through the apron of older gravels, down to schist basement. These streams have concentrated gold from the older gravels, and have been extensively worked for gold. A few streams drain areas of mixed gravels that contain both schist debris and rounded quartz pebbles. Some remnants of ancient quartz gravels, on lower slopes rather than the main Rock & Pillar Range, are aslo being eroded into modern streams. These stream beds contain young deposits of gold-bearing gravels gravel that was a focus of past mining. Most of these streams now flow on top of these gravel deposits, but some have cut right down to bedrock schist. Flood events can rework the gold in these modern streams, especially in the sections with schist bedrock, so local gold concentrations are frequently renewed.