There were two principal stages of gold mineralization in the Otago Schist basement: Jurassic-early Cretaceous, as at Macraes, and middle Cretaceous. The vein system at Oturehua is part of the latter group. The Oturehua vein system formed on the northeast margin of the Otago Schist belt, and is approximately along strike from the Macraes deposit (see map below), but has an entirely different structural origin. The Oturehua veins were emplaced during regional tectonic extension, rather than being emplaced during thrusting as at Macraes. 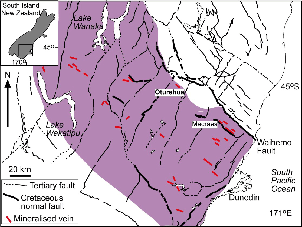 Summary geological map of the Otago Schist (purple) with the principal gold-bearing vein systems (red). Major Cretaceous normal faults are heavy black lines. Gold-bearing structures near the northeast margin of the schist belt include the Macraes mine and the vein system at Oturehua. 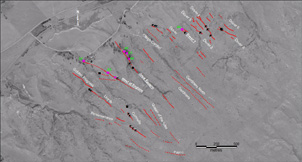 Map, superimposed on an aerial photograph, of the Oturehua vein system (red). The Golden Progress historic site is at centre left. Historic mine sites are indicated with symbols on the veins. The Central Otago Rail Trail crosses the top left corner of the image.

Gold mineralisation at Oturehua was controlled by northwest-striking normal faults that developed from coalescence of scattered, steeply dipping extensional fractures in lower greenschist facies schist. Formation of these mineralised faults was facilitated by structural preparation of the rock mass in the hinge of a kilometre scale post-metamorphic antiform and associated outcrop-scale kink folds. However, the mineralised faults and associated extensional fractures were not directly controlled by any specific structural elements of the kink folds.

A set of more than 50 mineralised normal faults cuts the schist at Oturehua. The faults strike northwest and dip steeply (>60°) northeast, and individual mineralised zones are traceable for up to 700 m along strike. Mineralised faults contain 10-100 cm thick quartz veins that are traceable as interlinked structures for tens of metres along strike. The mineralised faults formed in the hinge of a northwest trending post-metamorphic antiform, and the faults may have been localised by zones of weakness associated with kink folding in the hinge of the antiform. Hydrothermal fluids responsible for mineralisation were channelled by the normal faults. 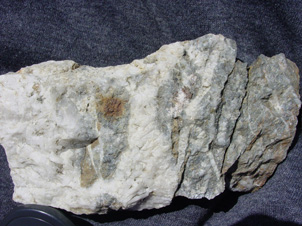 Photograph of a piece of mineralized quartz vein material (white) from Oturehua, with grey silicified schist breccia fragments. Oxidised pyrite and arsenopyrite in the central breccia fragment forms a brown patch. Gold is associated with these sulphide minerals. Orange-brown staining of the silicified breccia at right is due to oxidation of hydrothermal iron-bearing carbonate (ankerite). 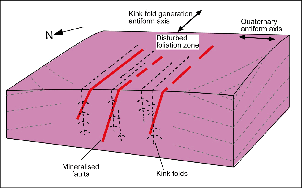 Sketch block diagram (about 3 km wide) showing the key structural features of the Oturehua vein system. The veins occur on a broad shallow Quaternary antiform that trends northeast. This antiform folds a tighter northwest-trending antiform that folded the schist foliation in the middle Cretaceous. Kink fold zones developed in the hinge of the Cretaceous antiform. Mineralised veins were partly controlled by these kink fold zones, but cut across the structures at the outcrop scale. 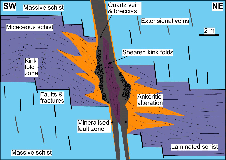 The style of vein mineralization at Oturehua was strongly controlled by schist rock types on the 1-10 m scale, as summarized in the diagram below. Massive schist layers are relatively rich in quartz and feldspar and have relatively little muscovite. Where massive schist is cut by mineralised faults, there has been little wall rock alteration (cm scale only), and the faults are filled with quartz veins that are largely planar, with scattered sulfide minerals and visible gold. In contrast, laminated schist, which is relatively rich in muscovite and chlorite, has been extensively folded, sheared, and altered adjacent to mineralised faults. Alteration involved silicification (addition of quartz) and ankeritic carbonate replacement of chlorite by kaolinite and/or sericitic muscovite, plus extensive addition of gold-bearing sulfide minerals, mainly arsenopyrite. Veins in the mineralised faults cutting laminated schist contain abundant breccia fragments that have been variably hydrothermally altered. The boundaries between mineralised veins and altered laminated schist are commonly diffuse.