Gold Cycle - Gold from the mountains to the sea 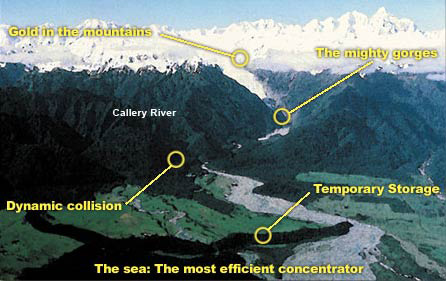 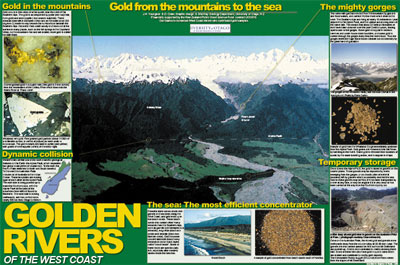 The material presented in these webpages comes from a poster. See preview above.

Golden Rivers: Gold in the mountains

Gold occurs in thin veins of white quartz near the crest of the Southern Alps. The gold is accompanied by pyrite (iron sulphide, fools gold) and arsenopyrite ( iron arsenic sulphide). These minerals were left in fractures in the rock as hot water (over 200 degrees C) made its way towards the surface from beneath the Southern Alps. Hot water rises continuously and flows out at the surface in many places, such as the hot springs in the Copeland Valley. As the mountains rise and are eroded, more gold is added beneath them. 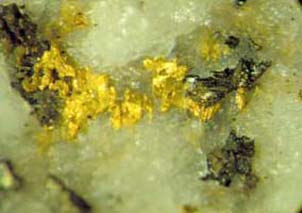 Coarse grained gold in a quartz vein ( the gold is 3 mm across) from the headwaters of the Callery River which flows into the Waiho River at Franz Josef. 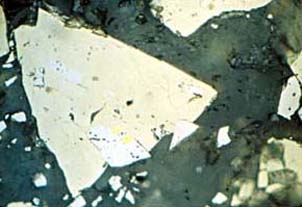 Whataroa vein gold. Fine grained gold particle (about 1/100th of a millimetre across, in center of picture) as seen under a microscope. The gold is totally enclosed in pyrite (pale yellow) with grains of arsenopyrite ( white) at the lower right.

The veins with gold are eroded from the mountains by glaciers and flood waters, and carried into the rivers which drain to the west. The Southern Alps are rising at nearly 10 millimetres / year adjacent to the Alpine Fault, and the valleys are eroding down at the same rate. This means that about 20 vertical kilometres of rock have been removed over the past 2 million years, leaving spectacular schist gorges. Some gold is trapped in bedrock crevices and under house-sized boulders, and some gold is carried through the gorges every time the rivers flood. Thus the gorges resemble huge sluice boxes cleaned out occasionally by the giant hand of glaciation. 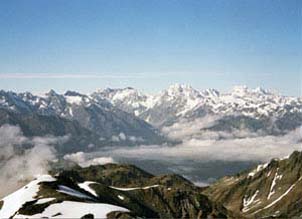 The gorges of the Whataroa valley, with the Main Divide in the background. Photo by Ross Cullen. 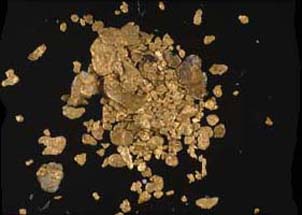 Sample of gold from the Whataroa Gorge immediately upstream from the Alpine Fault. Gold grains are hammered into flat flakes by tumbling in the rivers. Some gold is released from boulders of quartz by the same tumbling action, and is angular in shape. 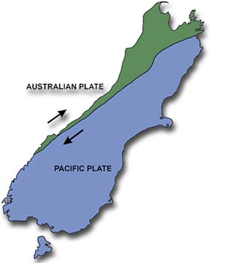 Westland lies astride one of the most dramatic geological features on the Earth: the Alpine Fault, which separates two global scale plates of crustal rock. To the east, the Pacific Plate stretches to North and South America. To the west the Australian Plate includes all of Australia to the Indian Ocean. These two plates are moving against each other at the Alpine Fault. The east side is being pushed up to make the Southern Alps, with the Alpine Fault at the base of the mountains from Milford Sound to Blenheim. The west side is moving northwards, and has carried rocks nearly 500 km from Otago to Nelson.

Once across the Alpine Fault, the gold is stored in gravels on the coastal plains. These gravels may be deposited by rivers emerging from the gorges, or as chaotic piles of material (moraine) left by glaciers which occasionally reached to the sea. Gold in these gravels may be flaky if it has been transported by a river at any time, or may be angular if it is very small or has been carried all the way from the Southern Alps by ice. 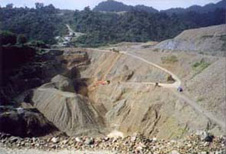 A 90m deep alluvial gold mine in gravels on the Australian Plate at Ross. (photograph courtesy Crown Minerals)

Once on the Australian Plate, the stored gold and gravels move northwards away from the source valley at 20-30 mm / year. The gravels are also carried upward as hills such as Mt Greenland are pushed up. Gold is reconcentrated in creeks draining these hills. Some of these hills also have gold in quartz veins which are eroded and contribute to nearby gold deposits. The Honourable Roddy nugget (99 ounce) from Ross comes from the slopes of Mt Greenland.

Golden Sea: the most efficient concentrator

Gold becomes concentrated with these heavy minerals in red or black layers called "beach leads". Some of these leads are spectacularly rich, especially after westerly storms erode the beaches. 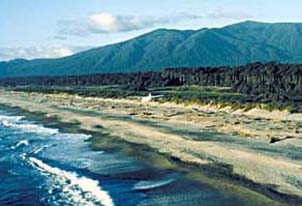 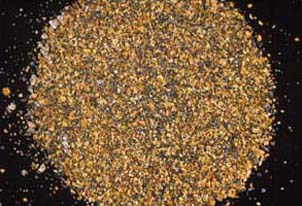 A sample of gold concentrated from beach sands south of Hokitika.