Gabriels Gully, near Lawrence in southeast Otago, was the site of the first major gold discovery in Otago. The discovery was made by Gabriel Read in 1861, and led to the Otago gold rush that developed gold mining as a major industry in Otago. 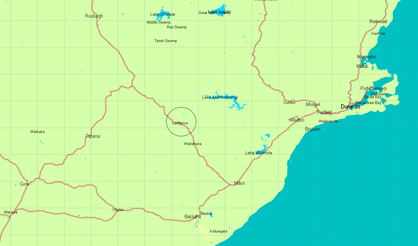 The gold at Gabriels Gully occurs as placer or alluvial concentrations in the Blue Spur Conglomerate. This ancient deposit was originally more extensive than it is now. Erosion of the Blue Spur Conglomerate released the gold into modern streams, and it was the rich gold accumulations in the modern streams that were the focus of the original mining activity.

The following notes give an outline of the geology of the site. Download/view: Where the gold-rush started-gold at gabriels gully.pdf

The Blue Spur Conglomerate is about 100 million years old, and was deposited as part of a regionally extensive set of river sediments that covered Otago, including large areas that are now below sea level offshore to the southeast. These sediments (called the Taratu Formation near Dunedin) are dominated by quartz pebble conglomerates and quartz sandstones. The sediments are nearly 1 km thick near Kaitangata, at the mouth of the modern Clutha River. The Kaitangata deposits contain numerous thick coal seams that have been mined as long as the gold in Otago. Gold has not been mined in the coal-bearing sediments, although gold does occur in streams and beaches where these sediments are being eroded. 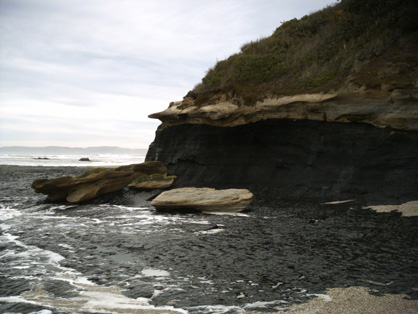 The Otago basement was being disrupted by fault zones with northeast and northwest trends at the time of the deposition of the Taratu Formation, and these faults caused development of steep-sided ridges and mountain ranges. Erosion along these fault scarps formed kilometre-scale gravel fans at the base of the scarps. The sediments in these fans included coarse angular schist and greywacke debris that was eroded from the rising fault scarps. This angular rock debris is distinctly different from the quartz pebbles that dominate the Taratu Formation over most of Otago. The Blue Spur Conglomerate is one of these fault-related gravel fans. 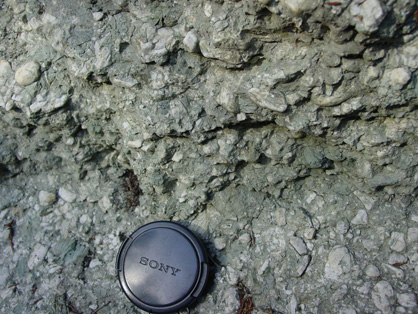 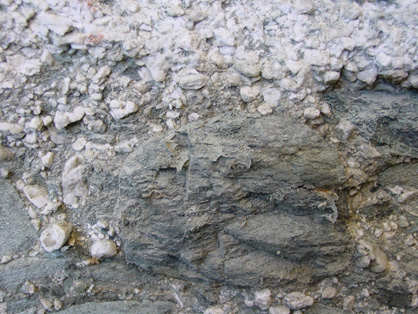 A large greywacke cobble, 10 cm across, with quartz pebbles

The Blue Spur Conglomerate has been cemented by minerals deposited by groundwater moving through the deposit. The main cementing mineral is calcium carbonate, a deposit from “hard water”. In addition, there a blue-green clay mineral (smectite) has formed by groundwater interaction with the schist and greywacke cobbles. It is this clay mineral that gives the conglomerate its distinctive bluish colour in some outcrops. 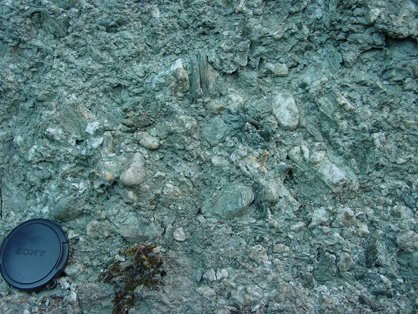 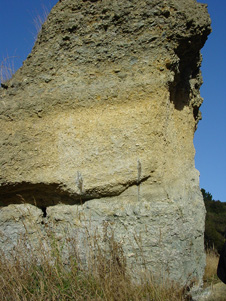 The cement has made the Blue Spur Conglomerate a hard rock that resisted processing by the early miners. The fact that a significant deposit remains at Gabriels Gully attests to the difficulty of gold extraction from such a hard rock. Sluicing, underground tunneling, and crushing, were tried at various times.

The Tuapeka Fault is a major structural feature in southeast Otago, and was the fault that created the scarp that the Blue Spur Conglomerate was eroded from. The fault surface is visible in Gabriels Gully, as the miners have sluiced away the conglomerate that used to rest on its surface. The fault surface slopes gently into the valley. The surface is coated with hard chippy black rocks that were crushed and then recemented during earthquakes. The fault has moved two different types of schist adjacent to each other. The northeastern side is schist with well-defined layering and coarse micas. The schist layering is poorly developed on the southwestern side of the fault, and the rocks are fine grained. Both types of schist appear as cobbles in the Blue Spur Conglomerate. 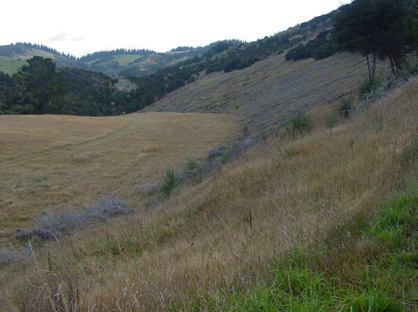 Deposits similar to the Blue Spur Conglomerate occur at several places along the Tuapeka Fault, including Monroes Gully and Wetherstones in the immediate vicinity of Lawrence. 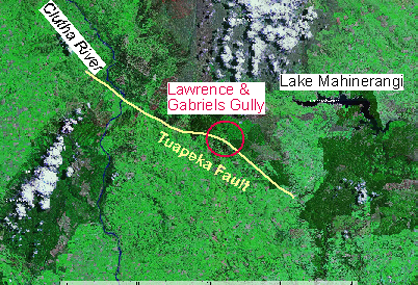 Several other gold-bearing gravel deposits occur along the Tuapeka Fault 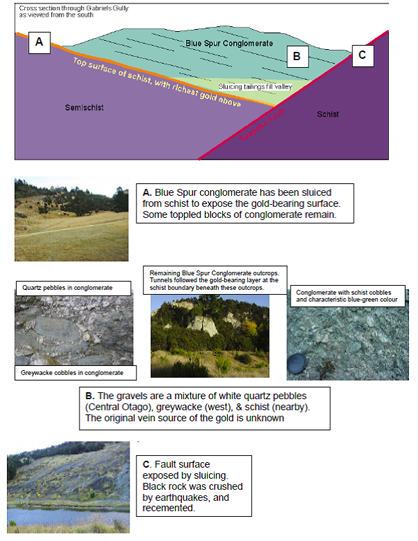 The structure of Gabriels Gully is shown in this cross section, with photographs from the indicated points to show the different rock types 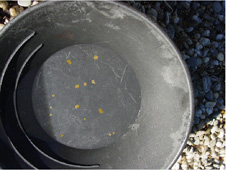 …. Gold shining like the stars in Orion on a dark frosty night… (Gabriel Read, 1861)