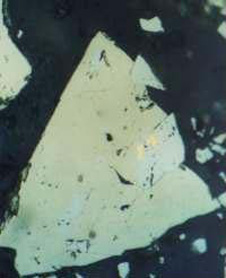 1. Microscope view of gold ore, seen with light shining on to a polished surface. The pale yellow shiny mineral (2 mm across) is pyrite (fools gold), with some small grey-white grains of arsenopyrite. These are surrounded by quartz which looks almost black in reflected light. Two tiny grains of gold can be seen in the red box. This is typical of Otago hard-rock gold, and is extremely difficult to extract. 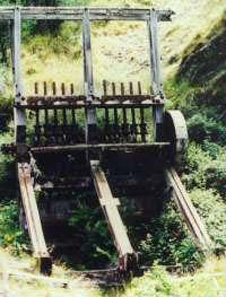 2. A 10-stamp battery (5 metres high) in the Shotover valley. These large and very heavy machines were carried in to rugged and remote locations and driven by water power. Each of the 10 vertical rods (centre) has a heavy foot which is moved up and down as the wheels turn. Quartz was fed under the rising and falling feet and was crushed. 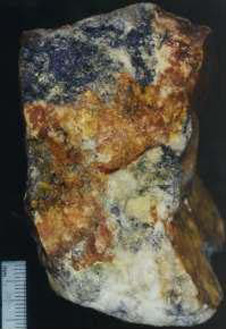 3. Oxidised ore from Macraes area. The brown colour indicates that the pyrite has decomposed to iron oxide (rust), liberating the tiny lumps of gold. The gold may remain in the iron oxide or move away in groundwater. 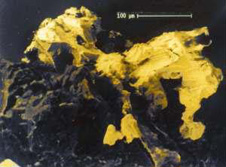 4. Electron microscope view (colour enhanced) of a half-millimetre piece of gold in oxidised ore from Barewood, near Dunedin. The gold is sitting on iron oxides formed from pyrite. Small lumps of gold in pyrite dissolve in water and eventually combine to form larger pieces such as this one 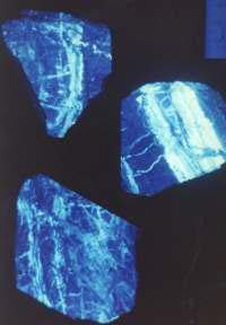 5. Quartz veins from the Macraes area, viewed under ultra-violet light ("black-light"). The scheelite glows white-blue, while the quartz is dark purple.

Gold in the quartz veins occurs as very small grains, generally totally enclosed in hard quartz. In addition, most of the gold is contained in sulphide minerals: pyrite (FeS2, fools gold) or arsenopyrite (FeAsS) which are in turn totally enclosed in quartz. The gold content of quartz veins was 10-50 grams per tonne of ore. Mining hard-rock gold requires considerabley more technological input than alluvial gold. Historically, hard-rock mining was a minor part of the gold mining industry in Otago because it is a very capital-intensive process.

First the quartz had to be blasted from the bedrock schist, in tunnels of underground mines. Ore was crushed in water to a fine slurry in large stamping batteries. The gold liberated at this stage was then dissolved in mercury or cyanide and extracted. These processes were inefficient and much gold was lost. The main cause of gold loss was when gold was not liberated from the sulphide minerals, and therefore could not be dissolved in the mercury or cyanide.

The schist surface zone (upper 10-20 m) has been invaded by oxygen-bearing rain water which oxidised many of the original iron-bearing minerals leading to the brown colouring ("rust") characteristic of Central Otago landscape. This oxidation affects sulphide minerals in quartz veins, and results in natural liberation of gold from the sulphides. Beneath this oxidised zone, schist is grey and sulphide minerals are intact. Early hard-rock miners extracted gold readily from the oxidised zone because of this natural liberation process, but gold returns dropped off dramatically when they penetrated into sulphide-bearing veins in the grey schist beneath. Hence, most historical gold mines became quickly uneconomic as they went deeper.

The problem of high technology and poor recovery in hard rock mining persists to the present. The Macraes mine near Dunedin is a technically advanced and highly capitalised operation which uses cyanide to extract gold. The plant is currently being upgraded to involve a new process which will increase gold recovery from 72 to 85%, at a cost of about 30 million dollars.

Many of the quartz veins contain a few percent of scheelite (CaWO4) which was periodically in demand as a source of tungsten, particularly during war times. It has always been difficult to save both gold and scheelite from the ore, as they require different techniques. Scheelite is most efficiently saved as coarser grains (sand size), but that size of particle does not release much gold from sulphides, or even from quartz. Hence, a decision was made by the miners to save either gold or scheelite.