Origins of the Gold in Otago 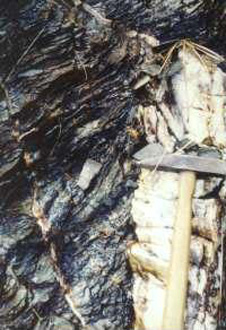 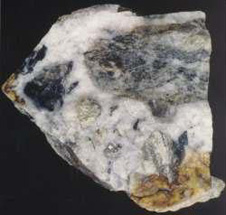 2. Quartz vein material containing lumps of schist, forming a breccia (cemented fragmental rock). The specimen is 20 cm across. Shiny iron minerals (pyrite, arsenopyrite) less than half a centimetre across are visible scattered through the breccia. These contain the gold. Gold is rarely found as larger pieces in the quartz.

Gold occurs in two distinct geological settings in Otago: within quartz veins in the schist (hard-rock gold), and as detrital gold grains in gravels (alluvial gold). The quartz veins which contain the hard-rock gold were formed by hot water (200-400°C) passing through fractures in the schist up to 15 kilometres below surface. The passing hot water deposited the quartz and gold as it rose and cooled through the schist bedrock. Hard-rock gold forms the original source for the alluvial gold, but many alluvial deposits have been derived by erosion of older gravel deposits. Gold is 19 times denser than water, and does not move far in streams unless it is as small particles (less than half millimetre).

The history of gold in Otago goes back about 150 million years, when Otago was mountainous, similar to the Southern Alps of today. The mountain ranges extended from Chatham Islands westwards beyond Wanaka, into Marlborough which at that time was immediately west of Haast. These mountains were made up of schist and greywacke as in Otago and Southern Alps today. Beneath the mountains, gold-bearing quartz veins filled active faults formed by earthquakes which accompanied the rise of the mountains. Similar processes have occurred during many times of fault activity and mountain building over the past 150 million years, and are still occurring today beneath the Southern Alps. Marlborough moved along the Alpine Fault nearly 500 kilometres northeastwards from Otago, taking its gold with it, over the past 20 million years.

As the mountains rose, they were eroded and gold from the quartz veins was concentrated into layers of coarse gravels on the eroded bedrock. Further uplift meant that these gravels were in turn eroded and the gold was reconcentrated. At least 15 kilometres of rock have been removed from over Otago. All that remains of that rock is the widespread alluvial gold, for which Otago is famous, and small amounts of gravel.