Due to the large number of images linked to from the text each is displayed as a small image in the table below. A higher resolution image will be displayed if you click on the small image.

The Macraes mine is geologically different from most gold-bearing rocks in the Otago Schist belt, in consisting of a broad shallow-dipping mineralized zone. Other Otago Au deposits are much steeper features, and are centred on well-defined quartz veins (Fig. 1). The Macraes mine is developed in a regionally continuous structural feature, the Hyde-Macraes Shear Zone (Fig. 2). This structure is up to 150m thick and slopes 10 to 20° to the northeast (Fig. 3). The shear zone occurs in chlorite zone schist (Fig. 3) that was metamorphosed at about 350°C at 10-15 km depth. Gold was emplaced in the shear zone by flow of hot hydrothermal water in the latter stages of this metamorphism, about 130-140 million years ago. At this time the shear zone was part of a thrust fault. The mineralized zone was subsequently uplifted to the surface between 130 and 100 million years ago. During the latter stages of this uplift, the mineralized zone was faulted against the underlying garnet-biotite schist (Fig. 3). The garnet-biotite schist was uplifted from greater depths and temperatures than the chlorite schist, along a major normal fault that truncates the base of the mineralized shear zone (Fig.3).

The Macraes gold deposit is the largest active gold mine in New Zealand. The mine has produced more than 1.8 million ounces of gold at an average grade of 1.6 grams/tonne since opening in 1990. The mine is operated by Oceana Gold (NZ) Ltd Gold production in 2004 was more than 184 000 ounces (5.7 tonnes). More than 5 million tonnes of ore per year are currently being processed. Resource estimate in 2004 was 3.9 million ounces of gold in 87 million tonnes of ore at 1.4 grams/tonne.

The shear zone shows up as slightly darker rocks within the Otago Schist at Macraes (Fig. 4). The zone is a very subtle feature which is difficult to detect in natural outcrops. The darker colour is imparted by graphite (carbon) that was added to the rock by the hydrothermal processes that introduced the gold. The shearing that accompanied thrust fault movement and water flow has caused some recrystallisation and crushing of rocks, that also contribute to the darker colour. Zones of shearing follow weaker rocks, and bend around pods of more massive rocks (Fig. 5).

The chlorite zone schist that hosts the shear zone is made up of two different schist types (Fig. 6). Micaceous schist has abundant muscovite (white mica) and chlorite, whereas feldspathic schist has abundant albite (feldspar). Micaceous schist is flaky and generally darker in colour (Fig. 7) than feldspathic schist that is more massive and hard (Fig 8 and Fig 9).

The same two schist types are also found in the Hyde-Macraes Shear Zone (Fig. 10), but they have been modified by the hydrothermal processes and associated shearing. The feldspathic schist develops thin black microshears that contain graphite, pyrite (FeS2), arsenopyrite (FeAsS) and rutile (TiO2). Gold is associated with the pyrite and arsenopyrite. Highly deformed black shear zones developed locally, with increased enrichment in graphite, pyrite, arsenopyrite and gold (Fig. 12). The micaceous schist was initially mineralized by direct chemical replacement of schist minerals by pyrite and arsenopyrite (Fig 13, Fig 14). Later deformation and mineralisation occurred along black microshears (Fig. 14), which were locally strongly developed as in Fig. 12.

The Hyde-Macraes Shear Zone also contains some quartz veins, as in other Otago Schist gold deposits (Fig. 1). Some of the quartz veins are massive white bodies that occur within the shear zone. These were generally deformed with the shear zone, and have abundant dark seams with graphite, pyrite, arsenopyrite and gold (Fig. 15). Other veins cut across schist layering and have delicate internal structures preserved (Fig. 16). The latter vein type commonly forms complex arrays or stockworks through feldspathic schist.

Gold generally occurs as small (micrometre scale) grains partially or wholly enclosed in pyrite and arsenopyrite grains (Fig. 17). Gold is rarely seen in the mine because of its small size and this encapsulation. The gold content of mineralised zones averages about 1.5 g/tonne, which is very low grade compared to many mines elsewhere in the world. The deposit is only economic with large-scale mining. Typical distribution of gold in the Hyde-Macraes Shear Zone is shown in Fig. 18, for the Frasers pit. The overburden has to be extracted first, to get to the gold-bearing rock beneath. The shear zone also contains zones of massive schist (predominantly feldspathic) that have insufficient gold for economic processing. These pods (Fig. 18) are also removed to overburden piles.

All the Hyde-Macraes Shear Zone rocks have been hydrothermally altered to some extent, although the effects are subtle. The most intense alteration involving pyrite, arsenopyrite, graphite and gold is described above (Fig 11, Fig 12, Fig 13, Fig 14). In addition, all rocks have had alteration of titanite (CaTiSiO5) to rutile (TiO2). Likewise, all rocks have had alteration of epidote (Ca-Fe-Al silicate) to siderite (FeCO3) and kaolinite (Al-silicate). The fluid which altered the rocks was >99% water, with only minor carbon dioxide and methane. The mineralising water has a distinctive isotopic compositional range which is affected by the graphite formation process (Fig. 19). 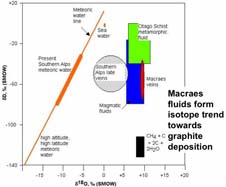 Formation of the mineral deposit at Macraes was closely related to processes of uplift of the Otago Schist belt (Fig. 20). Mineralisation began while the rocks were still hot and ductile. Folding and rock recrystallisation accompanied the early stages of mineralisation. With further uplift, the rocks became progressisvely more brittle, and fracturing and shearing began to dominate over folding and recrystallisation (Fig. 20). This occurred in what is known as the brittle-ductile transition, which was at about 300°C and 10km depth. The different styles of mineralisation in different rock types (Fig. 11, 12, 13, 14) occurred at different stages in the uplift process (Fig. 20). Graphite depositon is one of the most prominent features of the deposit. This occurred because of mixing of two different waters in the shear zone, one containing methane and one containing carbon dioxide (Fig. 21). These two fluids slowly moved through the shear zone, reacting as they mixed, to deposit graphite (Fig. 21). The presence of graphite provided a chemically reducing environment which encouraged deposition of sulphide minerals (pyrite and arsenopyrite), and also the gold. 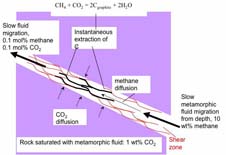 Rocks very similar to the Otago Schist are currently being uplifted in the Southern Alps to the northwest of Macraes (Fig. 22). This is occurring as the Pacific and Australian Plates collide along the Alpine Fault (Fig. 22). Hydrothermal activity in the form of hot springs is widespread along the collisional boundary (Fig. 22).

Chlorite schists similar to those that host the Macraes deposit occur near to the main topographic divide of the Southern Alps (Fig. 23). Veins in these rocks are common (Fig. 24) and these are the uplifted roots of the hydrothermal system that pervades the mountains. Gold occurs in some of these veins that formed at depth (Fig. 25). Some shallow veins are prominent because of weathering to brown of iron minerals, especially iron-bearing carbonate (ankerite) (Fig. 26). Minor gold deposition has occurred with some of these veins. Gold deposition is inferred to be occurring at depth beneath the mountains as well, in "mesothermal deposits" similar to the Macraes deposit, where rocks are being uplifted through the brittle-ductile transition (Fig. 27). Low crust resistivity in this region beneath the mountains (Fig. 27) is indicative of the presence of water pervading these rocks. This water is at >300°C, and is capable of leaching gold from the schist and transporting the gold into active shear zones.

Geology and geochemistry of the Macraes deposit