A North Otago specimen of the extinct white shark Carcharodon angustidens is one of the most complete of its kind in the world. The fossil includes more than 150 teeth and many vertebrae (elements from the backbone). The shark was much larger and heavier than any living great white shark.

It is unusual to find a cluster of fossil teeth from one shark. Normally, fossil shark teeth are found isolated. The way in which teeth grow into place in living sharks explains the abundance of single fossil teeth. In living sharks, old teeth are shed regularly as new teeth move into position in the jaws. The shed teeth fall to the sea floor where, because they are formed of resistant minerals, they fossilise readily. 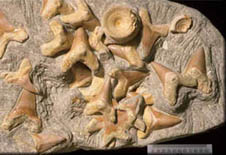 Full sets of fossil shark teeth are extremely rare. In this case, the natural association of teeth and backbone elements represents the body of a single shark that was buried in quiet waters away from scavengers. The fossil was recovered from the transitional Kokoamu Greensand-Otekaike Limestone, dated at about ~26 M years. The original water depth was 50-100 m, judging from the nature of the rock and its contained fossils.

This particular specimen, also, was larger than living white sharks. Proportions of teeth and vertebrae suggest that the animal was probably more than 9 m long and perhaps 8 tonnes in mass. Living white sharks reach about 6 m and ~1.2 tonnes.

The shark perhaps ate penguins, fish, dolphins, and baleen whales. Fossils of these animals occur in the same rocks as the shark.

Part of the fossil is on temporary loan to Otago Museum, Dunedin, where it may be seen in the Southern Lands, Southern People gallery.