The first fossil crocodile to be described from New Zealand is a small dark fragment of jaw perhaps 16 M years old, from ancient lake sediments of Central Otago. The specimen was described, but not named, by Drs Ralph Molnar and Mike Pole, in 1997, in the journal Alcheringa. Dr Pole found the bone near St Bathans, while working on fossil plants from Central Otago. The fossil is curated in the Geology Museum, University of Otago, as OU 22228. It is currently on loan to Otago Museum, where it can be seen on public display in the Southern Lands Gallery – along with many other specimens from the Geology Museum, University of Otago. 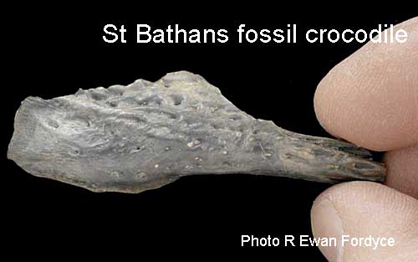 The St Bathans bone is an incomplete angular from the right lower jaw of a small crocodile. Its outer surface is pitted, probably for a tendinous sheet-like attachment of some of the jaw muscles. A part of the mandibular foramen is preserved on one surface. No tooth sockets remain. The fossil probably is formed from the original bone; there is no reason to think that its composition has altered significantly since burial.

Judging from the size of the fossil (a little less than 7 cm long), and given the proportions of the jaw in modern crocodiles, the original lower jaw was perhaps 20-21 cm long, with a skull of similar size. Molnar et al. (2002: fig 7) showed a reconstruction of a fossil Fijian crocodile Volia which appears to be comparable in size to the St Bathans animal. The living animal was probably a fraction of the size of the model on the floor at Otago Museum, displayed next to the bone from St Bathans.

Drs Molnar and Pole speculated about the possible temperature adaptations of the St Bathans crocodile, but there is little really strong and direct evidence for exact temperatures at the time. In other literature, Mike Pole suggested that fossil plants indicate a climate comparable to that of modern Brisbane or warmer. For New Zealand as a whole, the early Miocene and early Middle Miocene are regarded as warm temperate to subtropical.

The crocodile bone came from the Bannockburn Formation, a thick (700+ m) sequence of fine-grained and poorly bedded light green to brown siltstones and mudstones with lake fossils. Fossils from near St Bathans include freshwater mussels (Hyridella), abundant fish debris (isolated bones including otoliths - ear bones), bones of many species of waterfowl (ducks, geese), and broken eggshell. In places, plant fossils are abundant, and algal stromatolites or oncolites are known. The strata were deposited in an extensive shallow “Lake Manuherikia” which occupied much of what is now Central Otago. For a summary, see the account of Pole et al. (2003). The age of these rocks has been reported as early Miocene or middle Miocene; there is some uncertainty about exact dates, but around 16 M yr is likely.

Originally Molnar and Pole did not allocate the fossil to a particular group of crocodiles. Later, Molnar (cited by Mead et al. 2002) identified the St Bathans bone as  probably from a mekosuchine. Mekosuchines are a distinct and extinct group of crocodiles first recognised in Australia, and now known from other localities including Fiji, New Caledonia and Vanuatu. Mekosuchines range in age from at least Early Eocene, perhaps 53 M yr old (Queensland), to late Quaternary, with a peak abundance in Miocene-Pliocene times (say, somewhere in the range 2-20+ M yr) in Australia. At least one mekosuchine crocodile, from Vanuatu (Mead et al. 2002) apparently overlapped with humans only a few thousand years ago, and it is quite likely that humans caused the extinction of that species.

The origins of mekosuchines are not clear. What is known of the group suggests that they dispersed across oceans through the southwest Pacific. There is no evidence that they are “Gondwana” remnants. Judging from the known distribution of other mekosuchines in space and time, these animals could have lived in New Zealand either intermittently or continuously; there is no evidence either way.

According to Brochu (2001), mekosuchines were "blunt-snouted" forms. There is some uncertainty, as fossil jaws of mekosuchines are not known particularly well. Molnar et al. (2002) showed the Fijian Volia as blunt-snouted.