New Zealand has a rich and distinctive fossil record. Fossils from the Paleozoic and much of the Mesozoic - the Triassic and Jurassic - indicate links with the ancient southern continent of Gondwana. Younger fossils, from the Cretaceous and Cenozoic, record the gradual development of New Zealand's distinctive modern biota, following the breakup of Gondwana.

Our web pages show you some of the more-distinctive fossils studied by Department staff, and some of the more significant fossils from southern New Zealand. Students enrolled in our courses work closely with such material.

Some spectacular or important fossils – and rocks and minerals - are on display in our Geology Museum, which is open to the public. These fossils have been collected by staff and students in a century of field work mainly in southern regions. The Geology Museum at the University of Otago now contains the South Island's largest fossil collection 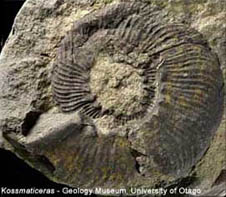 Late Cretaceous ammonoid, Kossmaticeras, from Fairfield, near Dunedin. The specimen is one of many displayed in the Geology Museum, University of Otago. For more details, see Fordyce, R. E. 2003. Fossils and the history of life. Pages 35-64 in Darby, J. T., Fordyce, R. E., Mark, A. F., Probert, P. K., and Townsend, C. (editors), The natural history of southern New Zealand. University of Otago Press, Dunedin. 387 p.

The Geology Museum is open to the public 9 am to 5 pm weekdays. Access is from the University Quadrangle. There is no entry charge. Please sign the visitors’ book! Groups may visit by arrangement; If you wish to arrange a visit then please fill in the visit request form:

The Geology Museum includes a fossil preparation lab where work on specimens can be viewed by visitors. This is the only such public-view facility in New Zealand. You can often see large fossil vertebrates, such as whales, dolphins and penguins, being prepared.

You can see some of our specimens on loan for display at other institutions. Visit Vanished World Centre (Duntroon, North Otago) to see fossils in context of the Vanished World Trail. For Otago Museum, Dunedin, we have provided all the significant fossils displayed in the Southern Lands Gallery. Some of our key fossils have been replicated for display elsewhere, for example, the “Whales” exhibition of Museum of New Zealand, and in the touring display “Dead precious” organised by GNS. 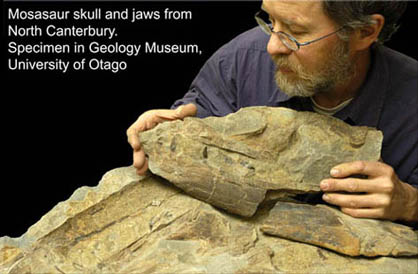 Mosasaur skull and jaws (lower block), and part of lower jaw (being held), from Cretaceous rocks of North Canterbury. The specimen (Geology Museum OU 22600) will be extracted and reconstructed for scientific study, starting in 2005. 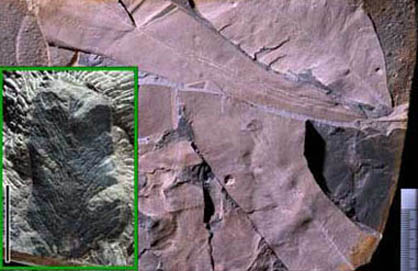