The Kokoamu Greensand is a noted fossiliferous Oligocene rock unit in the eastern South Island, especially in South Canterbury and North Otago. Fossils are rarely abundant in the greensand, except in a few pockets. Brachiopods, scallops and rare gastropods sometimes form thin shell-beds near the top of the greensand. Significant but usually rarer groups include corals, echinoderms, other molluscs, and crustaceans. Most of the fossils are delicate, and are recovered with difficulty. Some examples of Kokoamu fossils are in the Vanished World trail brochure (Fordyce 2002). 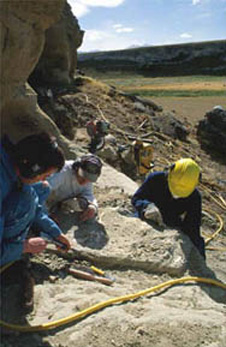 The figure (from Fordyce 2002) shows field extraction of a small fossil whale, during filming of the Japanese NHK TV series "Planet Ocean; " Geology Department staff and students are involved.

Since the late 1980s, the Kokoamu Greensand has been prospected systematically for fossil vertebrates – fish, sharks, penguins, whales and dolphins. Earlier, in the 1940s, the late Professor Brian Marples pioneered this work – although with less success than modern techniques allow. The vertebrates are nowhere common, but 20 years of activity has built up a significant collection now housed in the Geology Museum at the University of Otago. The fossils are discussed in various scientific articles, and some are considered on these web pages.

Barely noticed by the casual observer are enormously abundant microfossils – important tools for dating and determining ancient environments. Groups such as foraminifera, ostracods and coccoliths indicate that the Kokoamu Greensand represents much of Late Oligocene time, about 26-30 M years ago. An unconformity or time gap at the base of the Kokoamu Greensand seems to be a regionally or even globally significant horizon. The unconformity may represent a rapid fall in sea level, possibly related to changes in global ice volumes about 30 M years ago.

In North Otago, where one can see main reference sections for the Kokoamu Greensand, the formation is a thin unit (<1-5+ m) which underlies the thicker and more-prominent Otekaike Limestone. A typical outcrop will be formed of calcareous or limy glauconitic sandstone, generally massive and slightly muddy in the base, but more-obviously bedded towards the top. Because the greensand is thin and easily eroded, it does not crop out as well as the overlying limestone.

The name "greensand" indicates the presence of grains containing the green mineral glauconite. Such grains are known to form in conditions of slow sedimentation and low input of detritus from land. It is thought that the New Zealand landmass was low-lying when the Kokoamu Greensand was deposited in nearby seas. Indeed, the land was almost fully submerged at this time. 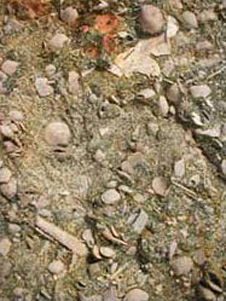 Close-up of the surface of a block of Kokoamu Greensand, showing abundant small brachiopods mostly under 10 mm across. Towards lower left is the incomplete large spine of a sea urchin. Fragments of smooth-shelled scallops are also present.

Geologist Dr Maxwell Gage named the Kokoamu Greensand and the overlying Otekaike Limestone in the 1950s, as part of geological research in North Otago. Gage's map and report of the district resolved many problems in an area long-studied and debated by geologists and paleontologists.

In North Otago and the Waitaki Valley, close to actual outcrops of the greensand, the Vanished World Centre in Duntroon has displays of Kokoamu Greenand fossils and interpretive graphics. Nearby, at "The Earthquakes" locality, the skeleton of a fossil baleen whale has been exposed in an outcrop of Kokoamu Greensand. This fossil – part of the Vanished World trail - is under protective cover to allow easy public viewing.

The Department of Geology is proud to be in partnership with Vanished World Inc., to help foster an understanding and appreciation of the geology of the Waitaki Valley region. Our organisations do not guarantee access to any particular site, we make no claim about the safety of natural features and private property, and we do not guarantee the right to find, collect or keep geological materials. We discourage random or destructive collecting. Most outcrops of Kokoamu Greensand are on private land; access is by permission of owner(s) and may be governed further by safety and health and other regulations. The collection of geological specimens for commercial purposes or for export is governed by law.

(Most of these are technical)