The first penguin fossil recognised to science was a dramatically large incomplete ankle bone from Kakanui, on the coast of North Otago. The bone was acquired by Government Agent Walter Mantell during his travels in Otago in late 1848, and was sent to Britain where it was studied by the pre-eminent paleontologist T.H. Huxley. Huxley announced the find in the Quarterly Journal of the Geological Society in March 1859. There he identified the bone as from a new genus and species of penguin which he named Palaeeudyptes antarcticus – literally, ancient winged diver of the south. The ankle bone or tarsometatarsus is perhaps the single most distinctive bone in penguins and, had he been presented with some other bone, Huxley might have found it more difficult to convince people that the fossil was from a penguin. 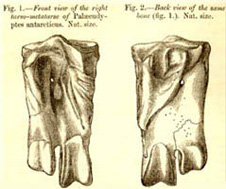 Huxley's original illustration of the ankle bone is reproduced here of Palaeeudyptes antarcticus. The left figure shows a front view; the right figure, the back view. One trochlea, or projection for a toe, is missing – from the right side of the front view.

Within a few decades, other fossil penguin bones were reported from New Zealand, both from North Otago and from Westland. Again, the bones clearly represented species larger than those of today. Because of their size, the fossils were thought to represent more individuals of Huxley's new species, Palaeeudyptes antarcticus. However, no ankle bones were known amongst the new specimens, and it could not be confirmed that all the fossils really did represent the one species. Indeed, despite 150 years of field work, no more material of Huxley's species has been found – the species Palaeeudyptes antarcticus is still known from one incomplete bone. So, the name can be used confidently only for the one fossil which resides in a drawer in the Natural History Museum, London. Finally, we aren’t even sure of the age of the fossil; it is probably from the soft white Ototara Limestone which, at Kakanui, spans the Eocene/Oligocene boundary – in the range 32-34 M years. However, the bone could be from the harder and younger Otekaike Limestone, with an age of perhaps 23-24 M years.

The lack of complete specimens was not going to spoil a good story. The early finds quickly led to speculation that ancient penguins were giants, with body heights perhaps reaching "eight feet" (about 2.4 m). In 1975, renowned fossil penguin expert G.G. Simpson reviewed penguin body size, and concluded that even the most massive New Zealand penguin, Pachydyptes ponderosus, was much smaller - at 1.43-1.62 m.

Other new discoveries from the Waitaki Valley region show that there was quite a range of body size represented amongst penguins – not all were giants. Species of Platydyptes, for example, probably stood a little taller than a living yellow-eyed penguin (Megadyptes antipodes), and several fossils of tiny penguins – the size of little blues (Eudyptula minor) are known.

Our collections of penguin fossils have been studied by several postgraduate students: by Tatsuro Ando, for a doctorate, and Craig Jones, for a masters.

Remarkably complete skeletons of Palaeeudyptes-like penguins are sometimes on display in the Geology Museum, University of Otago. (The Geology Museum is open to the public 9 am – 5 pm weekdays; access is via the Quadrangle.) Recent studies, published in the Journal of Vertebrate Paleontology, February 2012, show that some of the Palaeeudyptes-like penguins represent a new form – see our other web pages on fossil penguins. 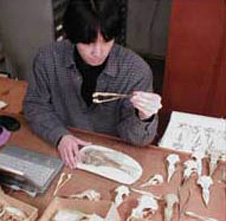 There are significant displays in North Otago that relate to fossil penguins. A poster reviewing these birds is in the Blue Penguin Visitor Centre in Oamaru. Interpretive graphics, casts and original fossils are displayed in the Vanished World Centre, Duntroon. 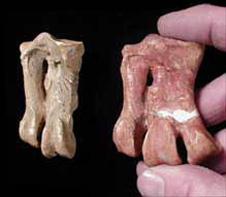 Cast of Mantell's original ankle bone on the left; original fossil of a Palaeeudyptes-like penguin on the right. Both specimens from Geology Museum, University of Otago.