A newly recognised fossil dolphin from New Zealand, named Papahu taitapu, is close to the ancestry of the modern dolphins and toothed whales. Papahu lived 19-22 million years ago, and is one of the few dolphins to be reported globally from the start of the Miocene time interval. Judging from the size of its skull, Papahu was about 2 metres long, about the size of a common dolphin. Like most living dolphins, Papahu had many simple conical teeth, but its head was probably a bit wider, and not as high-domed. It lived at a time of global warmth, in shallow seas around Zealandia – or proto-New Zealand – along with ancient penguins and baleen whales. 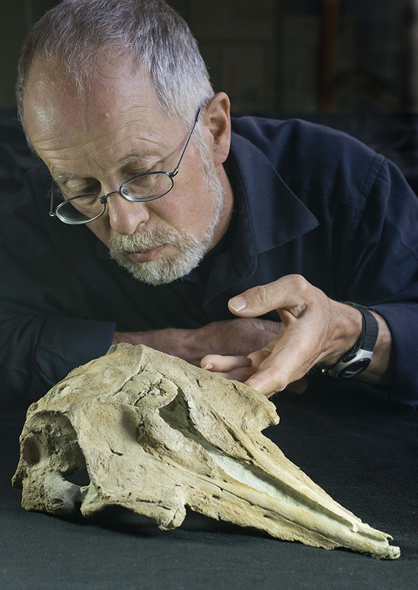 Dr Gabriel Aguirre and Professor R Ewan Fordyce, from the Department of Geology at University of Otago, New Zealand, described and interpreted Papahu in the Journal of Vertebrate Paleontology (January 2014). This work was part of Dr Aguirre’s PhD research. 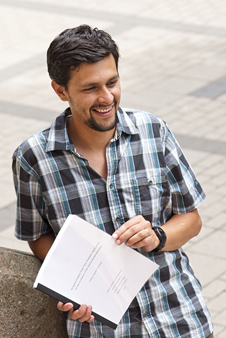 The skull, one jaw, and a few other parts of Papahu taitapu were found in marine sedimentary rocks in the Cape Farewell region of northern South Island. The Māori name “taitapu” honours that region, while Papahu is a Māori name for dolphin. Only a single specimen is known. The fossil is housed in the Geology Museum, University of Otago.

Structures of the skull and earbone suggest that Papahu could make and use high frequency sound to navigate and detect prey in turbid water. Papahu dolphins probably used sound to communicate with eachother.

Features of the Papahu skull can also be used to analyse relationships with other dolphins and toothed whales. That work shows that the skull is distinct from all previously-reported fossils, which is why the dolphin can be formally named as a new form. 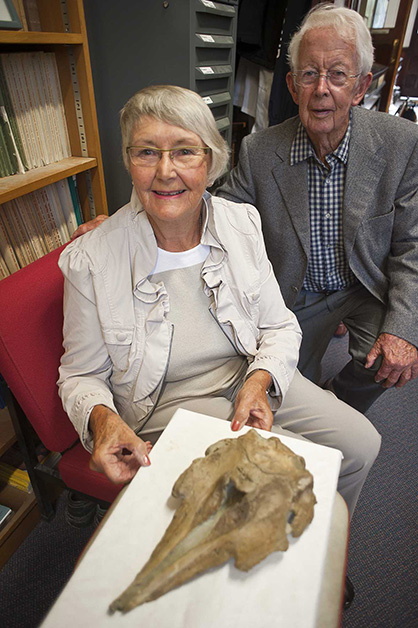 Jill and David Brathwaite examine the specimen of Papahu taitapu in March 2015. In 1987, Mr and Mrs Brathwaite found this fossil dolphin and reported it to Ewan Fordyce, but did not leave a note of their names. It is very good to be able to acknowledge their role as discoverers.

Aguirre-Fernández, G., and R. E. Fordyce. 2014. Papahu taitapu, gen. et sp. nov., an early Miocene stem odontocete (Cetacea) from New Zealand. Journal of vertebrate paleontology 34:195-210.  Abstract: The early Miocene is one of the least understood intervals in cetacean evolution. A new early Miocene dolphin described here, Papahu taitapu, gen. et sp. nov. (family incertae sedis, Cetacea, Odontoceti), is from the Kaipuke Formation (21.7-?18.7 Ma) of North West Nelson, New Zealand. The holotype of Papahu taitapu includes a skull with an open mesorostral canal, a broad-based rostrum (broken anteriorly), two pairs of premaxillary foramina, a slight bilateral asymmetry at the antorbital notches, a slight intertemporal constriction exposing the temporal fossa and the lateral wall of the braincase in dorsal view, and single-rooted (and probably homodont) teeth. The periotic has an inflated, spherical pars cochlearis and an anterior process with the anterointernal sulcus and a recurved lateral sulcus well developed. The skull size indicates a body length of about 2 m. Papahu taitapu plots cladistically in a cluster of archaic dolphins variously referred to as Platanistoidea or as stem Odontoceti. It matches no family described so far, but cladistic relationships for comparable odontocetes are not yet resolved enough to justify family placement.