The fossil record provides many examples of animals that seem strikingly different from their living relatives. The small dolphin Simocetus rayi has a skull that shows an intriguing mix of primitive and highly-specialised features. The dolphin has a partly-toothless upper jaw, and was perhaps a suction-feeder, taking food off the bottom. The facial region on the skull suggests that the animal was able to echolocate, navigating and perhaps detecting prey in dark waters. Yet, other aspects of the skull are primitive, suggesting that Simocetus is close to the early radiation of odontocetes – the toothed whales, dolphins and porpoises. (The odontocetes, together with the mysticetes or baleen whales, form the group of living mammals called Cetacea.) 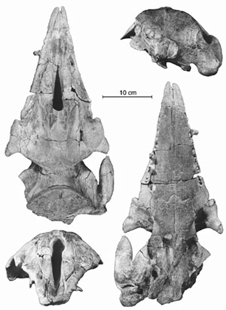 Simocetus rayi skull from above (dorsal) in upper left, below (ventral) in lower right, posterior (upper right), and anterior or front (lower left)

The skull and other fragments of Simocetus were chipped from hard mudstones of the Alsea Formation, a marine rock that accumulated in quiet conditions probably late in Oligocene times. Given the likely quiet depositional setting, it is strange that apart from the skull and jaw, only a few fragments of ribs and vertebrae were found. Quiet muddy settings usually allow whole skeletons to preserve.

When it was first extracted from the rock, Simocetus looked like it belonged with archaic dolphins called the Agorophiidae – supposedly the most ancient or basal odontocetes. As study progressed, however, it became apparent that the Family Agorophiidae had been used too broadly, and that the group should be redefined to include only species clearly close to Agorophius Simocetus, with its mix of primitive and highly-specialised features, does not belong there.

The most dramatic features of Simocetus are the down-turned upper and lower jaws, and the lack of teeth in the premaxillae bones forming the tip of the upper jaw. (The tip of the upper jaw is bent up, broken by compaction during burial, but the tip of the lower jaw retains the natural shape.) Further, Simocetus lacks the multiple "polydont" teeth seen in almost all odontocetes. Finally, the posterior teeth are not close-spaced, but have gaps (diastemata) into which the opposing teeth fitted. The teeth would have produced a sieving structure, rather than a grasping or shearing device. These features indicate that Simocetus perhaps fed as a bottom-feeder – sucking in a slurry of sediment and soft-bodied invertebrates, and straining the food out with its teeth. 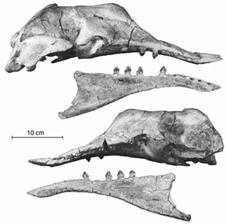 Simocetus rayi skull and mandible (lower jaw) from the right side above, and the left side below

Primitive features on the skull don’t reveal much about relationships, but are consistent with the idea that Simocetus is quite a basal odontocete: there is a prominent intertemporal constriction formed by the parietals (as seen in dorsal view), the premaxillary sac fossae lie well forward on the upper jaw, and the posterior ends of the premaxillae are narrow and prolonged.

Simocetus rayi is one of many fossils indicating that odontocetes were taxonomically and ecologically diverse by the Late Oligocene. What is known of the fossil record of odontocetes suggests origins very late in Eocene time, followed by a rapid, indeed explosive, radiation in the Oligocene.

The unique specimen of Simocetus rayi is held in the National Museum of Natural History, Smithsonian Institution, Washington DC.

Technical details are in the original article on Simocetus. Reprints of the article are available to bona fide researchers on an exchange basis; write to Ewan Fordyce.