Shark-toothed dolphins are large extinct odontocetes with long narrow jaws and teeth that vary markedly from front to back in the jaws. These animals – the squalodontids - were widespread and diverse in the Late Oligocene and the Early to Middle Miocene (about 28 to 15 million years ago), but then disappeared.

J-P-S Grateloup, a French scientist, proposed the name Squalodon for a fragment of jaw in 1840. Grateloup thought that the fossil might represent a reptile. Later finds from around the North Atlantic revealed that these animals were mammals, with skulls somewhat like those of living odontocetes - the toothed whales, dolphins and porpoises. However, the teeth were unlike any modern species. Living odontocetes typically have simple conical teeth that don’t vary much from front to back in the jaws, but squalodontid teeth are differentiated: at the tip of the jaw are incisors with conical crowns, which grade back into teeth with lower crowns and small, multiple denticles or cusps. Similarly differentiated teeth occur in archaic or ancestral cetaceans, the Archaeoceti.

Eventually, the shark-toothed dolphins were placed in their own family, Squalodontidae. By 1923, when Dr Remington Kellogg reviewed the family, specimens had been reported from many parts of the world. Some squalodontids were known from rather complete skulls, such as represented by Squalodon calvertensis from Miocene rocks of Chesapeake Bay region, but most were reported only from one or a few isolated teeth. Despite the incomplete nature of many specimens, some were used as the basis for new species and genera. (Some of the teeth might not even represent odontocetes, let alone squalodontids.) In the 1960s, Prof.-Dr Karlheinz Rothausen (then of Johannes-Gutenberg University, Mainz, Germany) reviewed the group in several articles.

For many decades, it was thought that squalodontids represented a stock from which many or most living odontocete groups evolved. In the late 1980s, Dr Christian de Muizon concluded that squalodontids are related closer to the endangered living Ganges dolphin, Platanista gangetica, than to any other living species. De Muizon based his assessment of relationships particularly on the scapula (shoulder blade) and also on the ear region. It is likely the squalodontids have little to do with the ancestry of most living dolphins.

In the 1990s, Ewan Fordyce found a fossil dolphin – later named Waipatia - with superficially squalodontid-like teeth. Formerly, as Kellogg 1923 showed, such dolphins had indeed been identified as squalodontids. In 1994, Waipatia was named and put in a new group, Waipatiidae, separate from but related to the original squalodontids. It is now accepted that ancient dolphins with differentiated teeth belong in various families, not only the Squalodontidae.

It is not clear why the squalodontids went extinct. Explanations have involved competition with other groups of dolphins, or climate change. 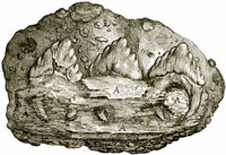 A specimen of Squalodon is one of the first fossils described in the scientific literature. In 1670, Angustino Scilla illustrated three teeth in a fossil cetacean jaw from Malta. Scilla's illustration, seen here on the right, shows three molariform teeth with triangular crowns on which there are many small projecting denticles. Each tooth has two roots. Remarkably, the fossil is still in existence in a scientific collection: in the Sedgwick Museum, Cambridge, U.K. According to Kellogg (1923), it represents the species Squalodon melitensis.

The Geology Museum collections at Otago include several relatively complete skulls of squalodontids. One of these fossils is the Squalodon-like skull with teeth and earbones shown on the right (illustration from Fordyce 2002). This specimen is from the Otekaike Limestone of the Waitaki Valley, and is of Late Oligocene age, about 25 million years old. Other illustrations of the skull are on the cover of American Paleontologist 8 (3), 2000, and at http://www.nationalgeographic.pt/revista/1101/feature5/zoom2.asp 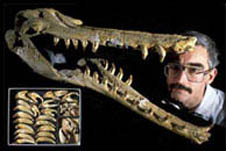 Occasionally, specimens of squalodontids are put on public display in the Geology Museum, University of Otago. (The Geology Museum is open to the public 9am – 5 pm weekdays; access is via the Quadrangle.)