Vertebrate fossils are not common in New Zealand, even in young rocks, and in ancient rocks it is truly unusual to discover bones. For that reason, when geologist Hamish Campbell (Institute of Geological and Nuclear Sciences, Lower Hutt) found a peculiar ridged fossil in hard sandstone near the Mataura River, Southland, he did not immediately consider it to be bone. Perhaps the fossil represented a peculiar ribbed portion of a large shell. Such an identification would be consistent with the likely Early Triassic age, perhaps 230 M years ago. 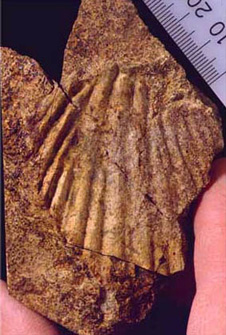 The fragment was passed to Ewan Fordyce who noted similarities with strongly-ornamented bones of extinct amphibians. This identification was confirmed and refined by Australian paleontologist Anne Warren (LaTrobe University, Melbourne) – the fossil appears to represent part of a shoulder bone of a large extinct salamander-like amphibian called a stereospondyl. The fossil was described in a short formal article that was published in early 2003.

The adjacent figure shows that the Mataura fossil is small, with a maximum length of about 65 mm. Further, the original fossil has eroded away to leave a high-fidelity natural mould of the bone. The latter clearly indicates that the fossil represents a large animal. Judging from more-complete specimens from Australia, the Mataura animal probably had a body length of about 2 m.

The Australian forms had a large head with eyes facing up and a large mouth with many needle-like teeth, rather short legs, and a sprawling gait. On the skull, long jaws with needle-like teeth would have been capable of fast snapping, but they would not have been very powerful. Perhaps the Mataura fossil represents an ambush-predator that lay in wait in the water to snap unsuspecting prey that came close. Possibly also the animal fed on land - although it could only have done so in damp environments where its skin would not dry out.

The animal lived a little before the start of the age of the dinosaurs, when New Zealand was probably part of the margin of the huge southern continent Gondwanaland.

The fossil is curated in the collections of Institute of Geological and Nuclear Sciences, Lower Hutt. It is currently on loan to Otago Museum where it is displayed along with other southern fossils in the "Southern Lands Southern People" gallery.

References for further reading (These are technical)