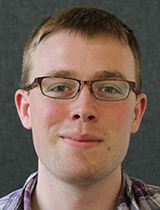 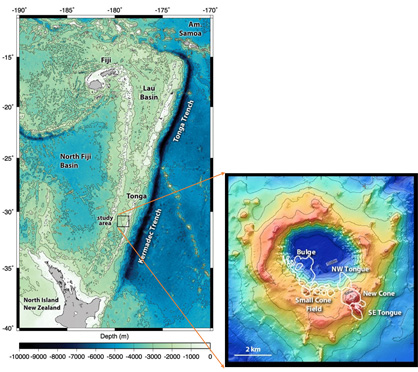 Fig. 1. Showing the location of the Havre Caldera within the Kermadec arc. Insert shows the new sea floor features identified when the volcano was mapped after the generation of the 2012 pumice raft.

All volcanic eruptions that occur in a deep subaqueous setting interact with the ambient water of the environment. This interaction can occur both directly through contact between the water and magma and indirectly through processes such as the increased hydrostatic pressure exerted by the overlying water (e.g. Kokelaar, 1986; Head and Wilson, 2003; White et al 2015). These have a strong impact on eruption processes affecting shallow magma ascent, fragmentation and dispersal.

Water has a higher thermal conductively and heat capacity than air and can also undergo a phase change at magmatic temperatures increasing in volume 1700 times at atmospheric conditions. Water is an effective working fluid readily able to transfer heat energy into kinetic. This can assist in driving fragmentation and dispersal even in lava/magma that failed to erupt explosively or erupt at all (Kokelaar, 1986).

The increase confining pressure exerted by the overlying water reduces the exsolution of volatiles during magma ascent (e.g. White et al, 2003). The impact of this is to both reduce the force driving eruption as well as decease the magma viscosity. The hydrostatic pressure will also act to reduce volatile expansion further reducing the potential energy driving magma ascent and fragmentation (e.g. White et al, 2003).

The impacts of this environment on silicic volcanism are complex and not fully understood, however are something that the results from this PhD hope to help answer. This is in part a result of the technical and financial difficulty of studying eruptions in this environment. Studies conducted on modern seafloor samples as well as subaerial exposed ancient deposits show a range of eruptive activity and processes (e.g. Kano, 2003). Direct observation of such silicic eruptions, however, remains elusive and maybe impossible due to the challenges involved. The eruption of Havre seamount is therefore a huge opportunity to gain important insight into the processes that occur during a deep silicic submarine eruption.

My project involves studying samples of an extensive seafloor ash deposit produced during the Havre eruption. From this we have been able to constrain a detailed eruption stratigraphy with 4 temporally and spatially distinct subunits. These subunits have been produced during both explosive and effusive activity and demonstrate a range of eruption styles. We have also investigated the role of the subaqueous environment in particle dispersal finding wide spread ash units produced during apparently non-explosive fragmentation of effusive products. In the Havre eruption, we also see a range of fragmentation processes with apparently varying degrees of water interaction. Although dominantly brittle we are also investigating a subset of ash particles that display distinctly fluidal morphologies, indicating unusual rheological behavior for a melt of this composition. To compliment this we have undertaken a series of water magma interaction experiments at Würzburg, Germany to further investigate the influence of water on fragmentation processes. 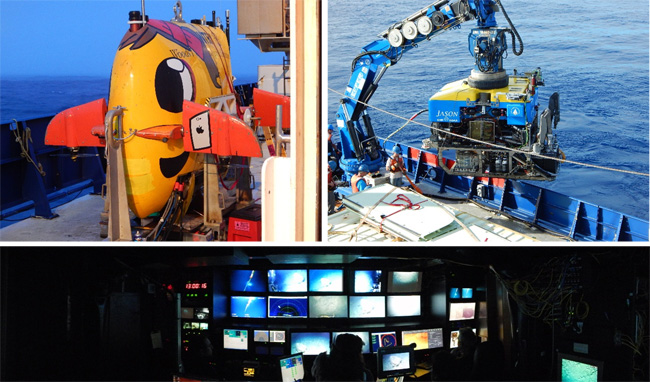 Fig. 2. Showing the AUV Sentry (top left) and the ROV Jason (top right) along with a view from inside the control van from which Jason is driven (bottom).

The eruption of Soufrière Hills Volcano (SHV) has been extensively studied and has given us important insights in to many key volcanic processes (e.g. Denlinger and Hoblitt 1999, Carn et al 2004, Clarke et al 2007). Due to the large range of volcanic activity, and the constancy in the magma composition during the 15 year eruption SHV is an ideal laboratory to investigate variations in magma ascent dynamics for differing styles of activity.

We examined the microcrystalline component tephra generated by a range of different types of activity at SHV, Montserrat between 2005 and 2010. The different styles analysed included Vulcanian explosions, precursory explosions, syn-extrusive ash venting, sampled from direct fallout and effusively erupted lava dome (sampled from block and ash flows). Glassy semi-vesicular grains from the 500µm and 1mm size were selected from each explosive event and examined using an SEM (Fig. 3). From this the microlite number density (MND) and several textural characteristics (Aspect ratio, mean size, plagioclase crystallinity etc.) of the plagioclase microlite populations were then measured.

By measuring these characteristics an idea of the magma conditions at the microlite nucleation depth and during the magmas subsequent evolution could be gained. The results of this analyses showed that each event plotted in distinctive fields. The explosive events defined a continuous trend in all the aspects of the microlite population. The MND of the dome plots in a distinctive separate field, while the textural characteristics of its microlite population plot within the continuous trend also seen in the explosive data.

The distinct nature of microlite crystallinity indicates that each style had quite distinct ascent rate histories. Nevertheless the variation in microlite crystallinity within glassy juvenile tephra from single events indicates that heterogeneity in the conduit was commonplace particularly within Vulcanian explosions and lava dome extrusion with syn-extrusive ash venting. 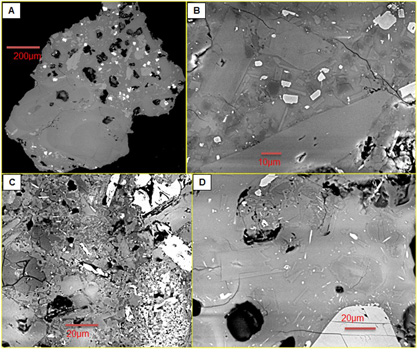 Fig. 3. BSE images of some of the ash examined. (A) Large scale view of a dense particle. (B), (C) and (D) show the microlite populations of the juvenile components from syn-eruptive ash venting, pre-cursor explosion and a vulcanian explosion respectively.