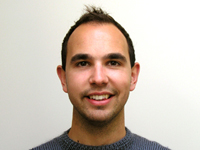 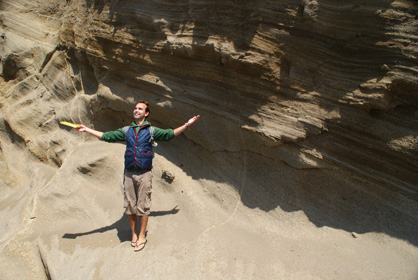 The North Otago region of the South Island of New Zealand is well known for its volcanic deposits, including, the Boatmans Harbour Pillow Lava and the Kakanui Mineral Breccia which have had notable interest from geologists since the late 1800’s. Three distinct periods of volcanism are known to have occurred throughout the Cenozoic, the first being of Paleocene age described from an occurrence of basaltic tuff in an exploration well 17 km off the coast of Oamaru. The second period is of late Eocene to early Oligocene age, covering an area of roughly 60 km by 30 km and includes the coastline from north Oamaru to south Moeraki. The third period of volcanism is found in eastern and central Otago and is much more wide spread than the previous volcanic periods, for example the Dunedin volcano in the middle Miocene (Coombs et al., 1986).

This project is designed to work on the second phase of volcanic activity which encompasses several well preserved monogenetic intraplate volcanoes known as the Waireka-Deborah volcanic group which erupted onto a submerged continental shelf between 35-30 Ma producing Surtseyan volcanoes (Fig. 1). The aim of the project is to gain a volcano by volcano interpretation of shallow-marine eruption processes by better understanding (1) precise depositional processes, bed by bed; (2) how the currents or suspensions that formed the beds were produced by the eruption along with the effects of these; (3) the current-generating or suspension- generating processes above the vent for parts of the eruption which we can be sure were erupted subaqueously  (e.g. lowest beds of the volcano); (4) the point we can recognize, and characterize when the eruption became emergent; (5) the variation in eruptive activity; (6) a possible water depth for the time of eruptive activity and (7) what the same magmatic feeding system would have produced if the eruption were subaerial rather than subaqueous (using some analogous deposits for this).

At this stage field work is focused near Oamaru including analysis of well exposed pyroclastic and reworked volcaniclastic rocks, pillow lavas, hyaloclastite breccias and contemporaneously deposited shelf sediments and limestones. The view is to compare these with other areas along North Otago. 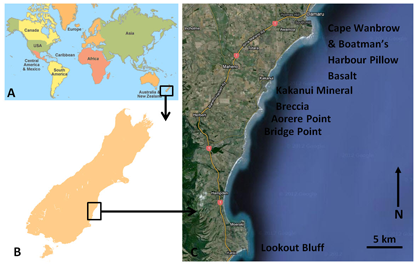 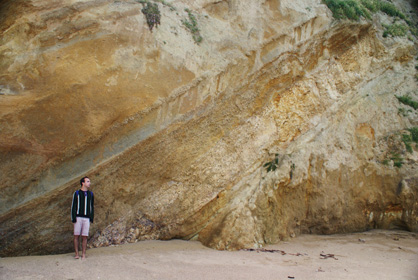 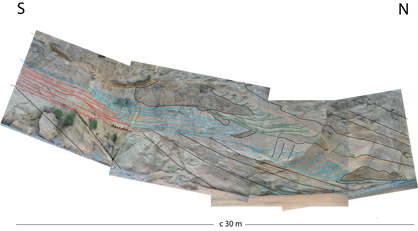 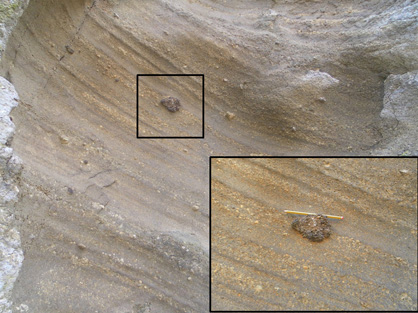 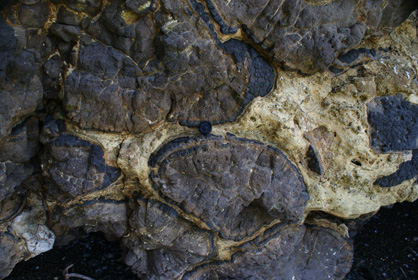 Fig. 7 - Pillow basalts at Boatman's Harbour with limestone within the interstices 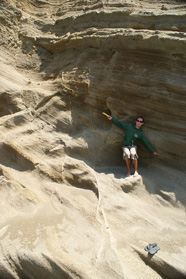 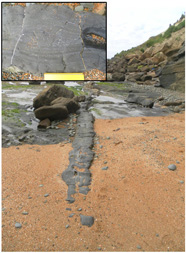 Volcanology and Sedimentology of Charnia bearing rocks of Charnwood forest

The relics of a rhythmic pattern of deposition are preserved within the exposures of Bradgate Park, Leicestershire, UK. They occur within the late Proterozoic Maplewell Group of the Charnian Supergroup and include the famous Ediacaran fossils. The succession consists of 22 similar stratigraphic sequences that together record a cyclic sedimentary pattern. Each sequence is unique in detail but all comprise a similar depositional structure, recognizable by six lithofacies. These lithofacies include; massive and parallel laminated mudstones, massive and parallel laminated silty sandstones, massive to parallel laminated coarse- to fine-grained sandstones, undulose interstratified fine-grained sandstone and mudstone, fine- to coarse-grained sandstone with mudstone intraclasts and massive to internally laminated and cross-laminated fine- to coarse-grained sandstones with fluidization structures. Each sequence is interpreted as a series of turbidity currents representative of Bouma divisions A through to E representing what appears to be a subtle progradational cycle, terminating or overlain by a debris flow deposit. This has further significance as the repetition of such depositional sequences means that cycles could be either autocyclic or controlled by high frequency sea-level fluctuations and/or have a possible milankovitch control factor. The lack of wave-reworked structures and of internal erosive surfaces indicates deposition below storm-wave base. The abundance of soft-state deformation including, convolute lamination, down-sag, syn-sedimentary faulting and fluidization within the deposits suggests sedimentation occurred in a highly unstable environment, prone to slumping. This is further supported by the in-situ break up of finer bedded material to form clasts within a coarse grained matrix. The cyclic pattern has further implications for the understanding of Ediacaran fossils found within the deep water parts of the sequence. 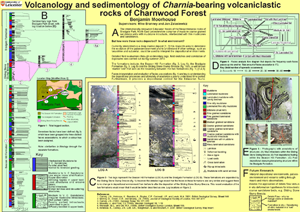 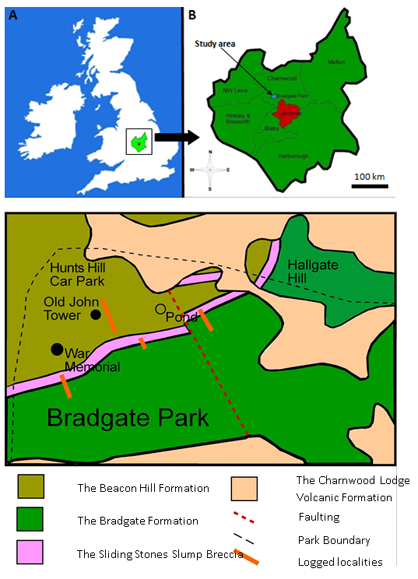 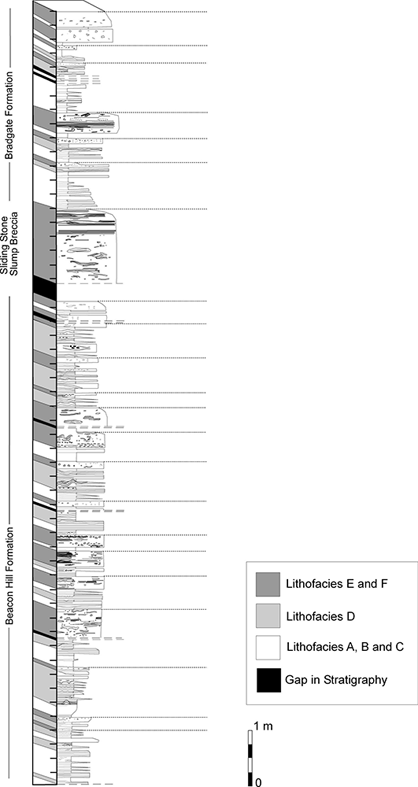 Fig. 2 - Measured section from the most westerly point of the Bradgate Park exposures. Small spaced dashed line represents the start of a new stratigraphic sequence containing variations of facies A-F.