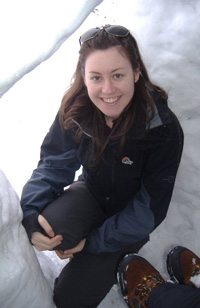 The consequences of mine related discharges to the environment are of local and international importance. Within New Zealand, public concern regarding the environmental effects of mining is high, particularly on conservation land. Internationally, there is a focused research effort to understand mine discharge interactions with relation to people (potable water), biota (clean stream ecology) and agriculture (land contamination).

New Zealand has a significant coal and gold mining industry; both active and historical, and is therefore a fitting site to study issues related to mine drainage. Furthermore, the South Island of New Zealand has varied geology, climate and topography, and a range of mine types, making it an ideal laboratory to study the complex controls on mine discharge chemistry.

This project combines field studies, experimental laboratory work and computer modeling in a multidisciplinary approach to quantify the short- to long-term environmental impacts of mining. The project will benefit from a range of research and industry partnerships encompassing geology, geochemistry, zoology, botany and computational sciences.  Field studies will utilise Macraes Goldfield open pit mine, Stockton coal mine and others. Macraes is New Zealand’s largest gold mine, located 100km north of Dunedin. Access to this mine will permit investigations into pit lake chemistry and the surrounding biota, assessment of tailing water discharge chemistry and processing mineralogy. Stockton is New Zealand’s largest open pit mine, located on the northwest coast of the South Island. Here, studies will focus on mine waste, geochemical controls on generation of acid mine drainage and physiochemical processes of mitigation. The project will investigate regeneration of chemically extreme substrates in coal mines and the effect this has on plant physiology. It is a further aim to understand the geochemical controls on mineral dissolution, precipitation and adsorption.

The laboratory work will employ a range of analytical techniques, including ICP-MS, electron microprobe and SEM, XRD and XRF.  The end result will be to produce a geochemical and mineralogical model for prediction and prevention of mine discharge issues.  Through a multidisciplinary approach, the project also aims to contribute basic science to the engineering and biological issues associated with mining.  The ultimate goal is to ensure efficient management of mine sites from first opening to final closure. 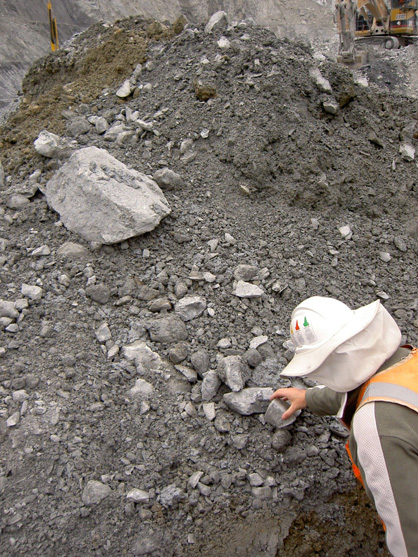 Image 1: Sample collection from the pit of a working gold mine in the South Island, New Zealand. Mineral deposits are often enriched in arsenic and antimony. Here samples are being collected for use in long term (>1yr) leaching experiments. The aim is to provide a better understanding of arsenic and antimony dissolution, precipitation and mobilization when mined rock is exposed at the surface (Source: CRL Energy). 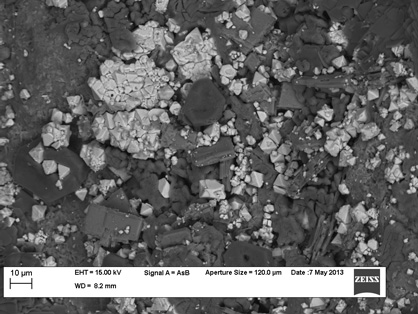 Image 2: SEM image of the surface of an arsenic-rich (>24,000 ppm) ore sample which has undergone 6 months of kinetic leaching experiments. The image shows significant precipitation of secondary sulphates (grey) and As-bearing minerals (white).