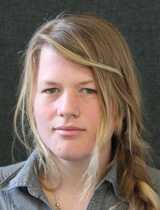 PhD topic: An examination of carbonate alteration zones in the Southern Alps, New Zealand, with the goal of understanding the fluid-rock interaction and assessing the potential link between gold mineralisation and lamprophyre magmatism

New Zealand’s Southern Alps possess a variety of carbonate-bearing alteration zones, some of which are associated with gold-mineralised faults (Craw et al., 2006) and others associated with lamprophyric magmatism (Cooper et al., 1986). Similar gold-lamprophyre associations are recognised in other parts of the world (e.g. Ashley et al., 1994). The goal of my research is to examine the different types of carbonate-bearing alteration in Mt. Aspiring National Park and assess the chemical similarities and differences during formation. Important aims are to assess whether the lamprophyric magmatism is genetically related to gold mineralisation, and to generate a model that explains the fluid-rock interaction.

Being an actively rising mountain belt, the Southern Alps are an excellent location to conduct this research as they show a variety of different crustal levels. Therefore the carbonate alteration zones show a variety of textural settings, have not been overprinted during subsequent deformation, and apart from the lamprophyres, magmatites, that could complicate matters (see Groves et al., 2003), are not present (Craw et al., 2006). Craw et al. (2006) suggested that there might be a link between the different alteration types, as they have similar ages and structural orientations. However, this inference now requires a comprehensive textural, geochemical, isotopic and thermodynamic evaluation. 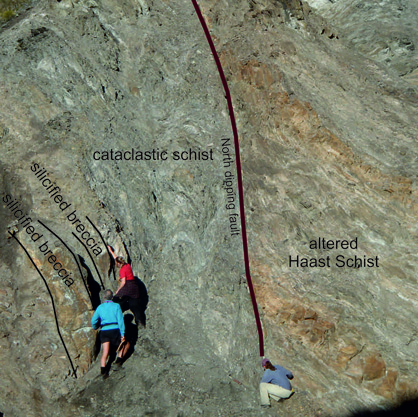 Outcrop of a fault zone at Copper Creek, near Mt. Aurum. The fault zone consists of brecciated schist and a network of veins. The northern contact of the schist is marked by an about 3 cm wide silicified breccia and fault. In the adjacent schist thin carbonate and quartz veins penetrate the foliation. In the orange layers metamorphic phyllosilicates have been nearly totally replaced by ankerite and kaolinite. (Not on the photo: The fault accommodates a transtensional shear with Top to the NW.) 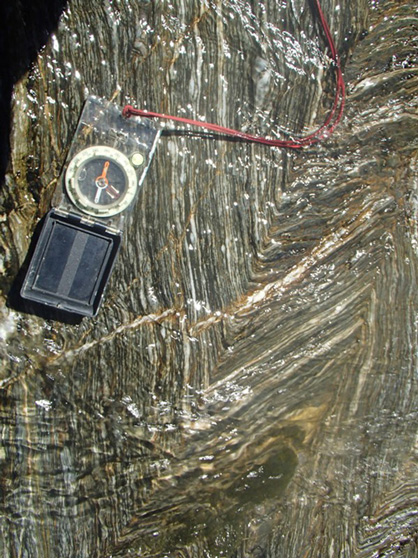 Chevron folds with ankerite mineralisation parallel to the foliation and quartz and ankerite veins crosscutting the foliation. The folds are related to the thrusting activity along the moonlight fault (Craw et al., 2006).