My current research interests are mainly focused on the structure and mechanical properties of upper-crustal fault zones, and the evolution of fault rock microstructure during the seismic cycle. I use a combination of fieldwork, microstructural analysis and rock deformation experiments.

An important part of my research involves comparing natural fault rocks with those produced in experiments to try and understand the most important deformation processes and the significance of certain fault rock fabrics.

Are you a potential student who is interested in fault zones, shear zones, structural geology, reactions, field work and lab work? Contact:

1) The Livingstone Fault, New Zealand: An analogue for the slab-mantle interface.

The Livingstone Fault is a >1000 km long terrane boundary in the South and North Islands of New Zealand that juxtaposes ultramafic rocks (primarily peridotite and serpentinite) of the Dun Mountain Ophiolite Belt against quartzofeldspathic lithologies (schist, volcanics, sandstone and siltstone) of the continental Caples Terrane.

The fault is typically characterized by a zone of sheared serpentinite mélange tens to several hundreds of meters wide. The Livingstone Fault is superbly exposed in many places in the high mountains of New Zealand, and provides an excellent opportunity to study structural, mineralogical and chemical processes that are important when ultramafic and quartzofeldspathic rocks are juxtaposed.

PhD student Matt Tarling is currently working on the structure of the mélange and the effects of metasomatism on slip dynamics in the Livingstone Fault. 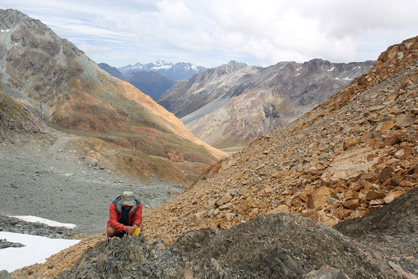 At Fiery Col in the Olivine Wilderness Area, field assistant Simon Alder collects structural data from the serpentinite mélange along the Livingstone Fault. 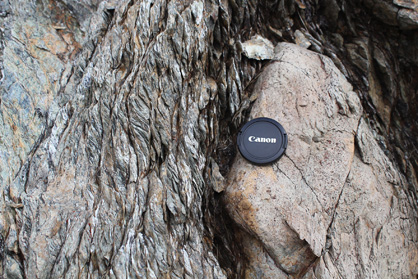 2) Hydrothermal reaction laboratory in the Department of Geology

We have recently set up a laboratory to perform hydrothermal reaction experiments using steel and teflon autoclaves. We currently have ten autoclaves and two laboratory ovens capable of maintaining constant temperatures of up to 350°C for prolonged periods of time.

Our current experiments are designed to investigate the nature of serpentinization reactions at nanogranular and ultra-fine grain sizes, and the progress of metasomatic reactions that occur when materials of diverse composition are in contact with each other.

Reaction products are investigated using scanning- and transmission-electron microscopy, and sub-micron Raman spectroscopy. Future work will include development of autoclaves with controlled fluid input and output, allowing us to sample and monitor fluid compositions during the experiments.

We will also perform experiments to better understand carbonation of olivine- and serpentine-bearing materials. Because of the potential importance of carbonation reactions for in-situ storage of atmospheric CO2, this topic is of global importance and is currently being explored by many research groups around the world. 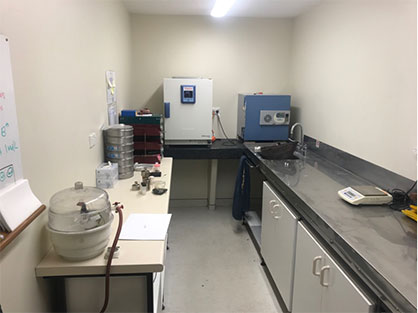 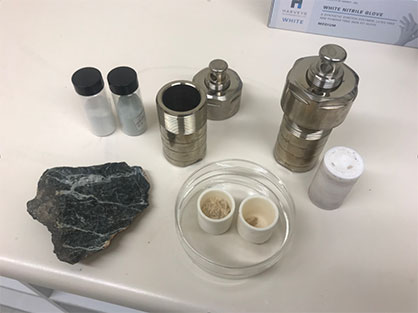 Sample materials are loaded in to Teflon cylinders that are sealed by stainless steel autoclaves. 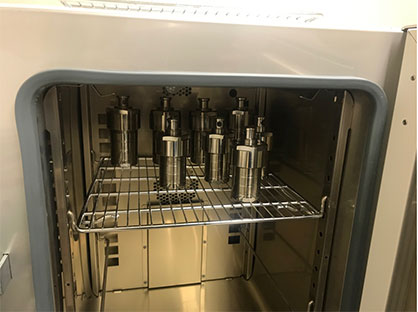 The autoclaves are held at constant temperature for a pre-determined time period. By varying parameters such as the grain size of the starting materials, fluid compositions, and duration of the experiment, we can quantitatively explore the nature of hydrothermal reactions in the laboratory. This includes our current experiments to investigate serpentinization and metasomatism at ultra-fine grain sizes.

3) Fault rock evolution during the seismic cycle in carbonate rocks

In many seismically-active areas worldwide (e.g. Italy and Greece), earthquake ruptures nucleate within and propagate through thick sequences of carbonates (i.e. limestones and dolostones).

In the last few years, my collaborators and I have been working on the mechanical behavior of carbonates during the seismic cycle, as well as the evolution and significance of carbonate fault rock fabrics.

Major outcomes of this research programme to date include: some of the first detailed microstructural studies of natural and experimental slip zones in limestone (Smith et al, 2011, Rempe et al 2014, Mitchell et al, 2015) and dolostone (Fondriest et al, 2012); the suggestion that localized recrystallization (Smith et al 2013, Geology) and mirror-like slip surfaces (Fondriest et al, 2013) may be indicators of seismic slip in carbonates; the analysis of the effects of strain localization on dynamic weakening in calcite fault gouge (Smith et al, 2015, EPSL); and, the experimental formation and description of “coseismic foliations” in carbonate fault rocks (Smith et al, In Press). 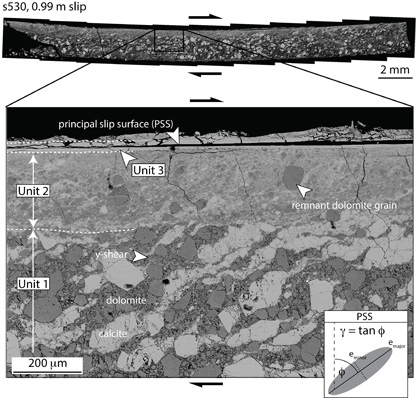 This regional-scale (>200 km long) fault system in southern New Zealand was an Oligocene basin-bounding normal fault zone that reactivated in the Miocene as a high-angle reverse fault (present dip angle 65°–75°). Regional exhumation in the last c. 5 Ma has resulted in deep exposures of the MFZ that present a unique opportunity to study the structure, deformation processes (Alder et al, 2016), strength and reactivation history of a basin-scale reverse fault at basement depths. 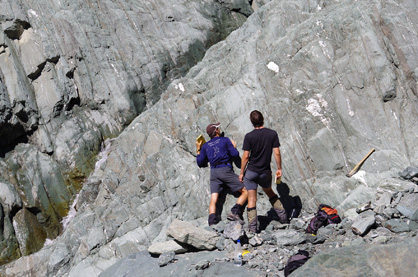 Looking at thin, foliation-parallel pseudotachylytes in the hanging-wall of the Moonlight Fault Zone in the Matukituki Valley. Alder et al. (2016) 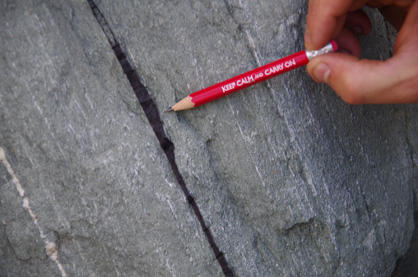