I am structural geologist with research experience in a range of topics, from engineering rock mechanics to tectonics. Much of my research involves combining detailed field studies of exhumed, deformed rocks from the crust and mantle lithosphere, with detailed microscopic and textural analysis. Particular interests are: processes of strain localisation, fabric inheritance, very high strain deformation, and the record of seismic processes in fault rocks.

I think that well-constrained natural examples, such as New Zealand’s Alpine Fault zone, have much to offer us in understanding earth deformation, and am particularly keen to help to provide links from the field to the experimental laboratory.

I am also interested in unravelling the complexities of tectonic evolution of the Northland region of New Zealand, and in the relationship between plate motions and local deformation fabrics. 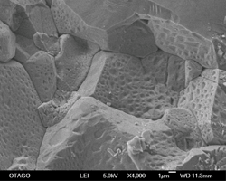 Effect of fluids on the strength of the mid-crustal coupling zone on major faults, based on insights from New Zealand’s Alpine Fault

Fluids, which fundamentally affect the way rocks deform, are not uniformly present in all fault zones. Abundant fluids in fault rocks likely promote the weakening and localisation of deformation onto these structures that is required to maintain a mobile outer skin of tectonic plates on the Earth. On the other hand, nominally dry rocks are likely sites of earthquake nucleation. This research aims to constrain the extent of fluids occurring at mid-crustal depths (c. 10-20 km) within New Zealand’s active Alpine Fault zone, which is analogous to major plate boundary fault zones worldwide. Fault rocks exhumed adjacent to the fault contain evidence of significant variations in fluid content. These variations will be mapped along the >400 km length fault zone. We will then characterise the record of fluid-rock interactions and determine realistic rheological parameters in exhumed fault rocks, using a powerful combination of conventional and emerging micro-analytical techniques. The structural observations will be used to refine interpretations of geophysical datasets that indicate variable fluid involvement in the active fault zone at depth. Mechanical (computer) models will elucidate the effects these realistic rheologies and geometries have on patterns of crustal deformation, focussing on the evolution of fault strength, and seismogenic behaviour. 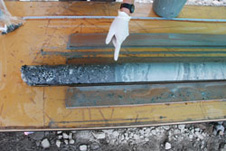 The Alpine Fault is a globally significant plate boundary structure with the potential to fail, generating a <M8 earthquake in our lifetimes. The Alpine Fault is also unique because rapid uplift and erosion has exhumed fault rocks from depth, and perturbation of the thermal structure due to uplift continues to restrict earthquake activity to depths that are shallower than normal.
The DFDP project proposes to drill, sample, and monitor the Alpine Fault at depth, to take advantage of excellent surface exposures and the relatively shallow depths of geological transitions, and hence to better understand fundamental processes of rock deformation, seismogenesis, and earthquake deformation.
I am helping Rupert Sutherland (GNS Science) and John Townend (Victoria University of Wellington) to manage this project. The research also involves other scientists at GNS Science, the universities of Auckland, Canterbury, Otago, and Victoria, and several overseas organisations.
The first pilot boreholes (DFDP-1A) were drilled to depths of ~100 and ~150m, through the Alpine Fault, in January 2011. We plan a second phase of drilling in 2014. Otago’s main interest at this stage in the project is to characterise the microstructures and physical properties of the brittle fault rock sequence.
More details can be found at: https://wiki.gns.cri.nz/DFDP.

If you are interested in obtaining samples or data from this project please refer to the instructions here: https://wiki.gns.cri.nz/DFDP/DFDP-1_Gaunt_Creek/DFDP-1_core 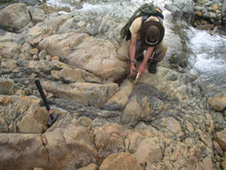 It is increasingly recognised that the uppermost mantle plays a fundamental role in stress transfer and localisation processes in the lithosphere. Consequently, with colleagues at the University of Wisconsin, Madison and Texas A&M University, I am working with naturally deformed peridotites to investigate rheological relationships in ultramafic rocks, in the hope of providing insights into the significance of mantle deformation for the earth’s tectonic system.

Field work has been undertaken in the Red Hills, Nelson, a large block of unserpentinised Dun Mountain Ultramafics. A previous geochemically-focussed study (Sano & Kimura, 2006) has identified a complex three-phase history of melt extraction and emplacement within different layers of the Red Hills massif during its residence in a back-arc environment. In a separate, structurally focussed study, Webber et al. (2008) mapped a 4k square kilometre area around Porter’s Knob, where they identified five overprinting, localised deformation fabrics formed by solid-state creep at mantle lithosphere conditions.

By field analysis, coupled with microstructural, textural and chemical studies, we are working to link these two datasets in an attempt to

More details can be found at: http://www.lithosphere.co.nz/ 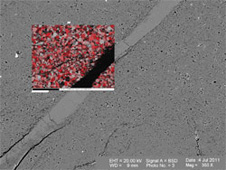 SEM image and inset EBSD map of a 'fault' surface now composed of 50 microns thickness of amorphous silica, generated during shear on an existing saw-cut surface at ~450degC and Pconf=0.5GPa in a Griggs apparatus.

Role of dislocations in frictional behaviour of faults

The frictional behaviour of faults affects whether they will generate earthquakes. Scholz (2002) proposed that the base of the crustal seismogenic zone is found at ~350ºC because, above this temperature, dislocation processes can operate around a fault plane during the earthquake cycle, resulting in a transition from slip weakening to slip strengthening frictional fault behaviour. Despite the wealth of experimental literature, there are few published microstructural observations to constrain dislocation motion around (and even within) faults. This is probably because the materials that deform in these events are very fine-grained (e.g. Goldsby & Tullis, 2002; Pec, 2010). However, recent technological advances mean it is now feasible to make microstructural observations that may resolve which processes were active (e.g. Bestmann & Pennacchioni, 2009), enabling much more precise definition of the range of lithospheric conditions under which unstable fault behaviour should be observed.

I’ve recently started working to couple experimental investigations of dislocation processes around faults, with study of natural samples, in collaboration with Rhur-Universität Bochum, and Utrecht University. These pilot studies have been supported by the German DAAD and the Royal Society of New Zealand. 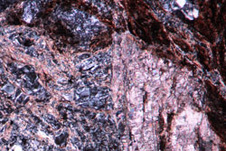 This is a larger framework research program, involving both me, postdoc Dr. James Scott, Prof. Dave Prior, our students, and collaborators such as Dr. Tom Mitchell of Rhur-Universität Bochum. We are particularly interested in providing information about microstructural development of primarily continental fault rocks that have accommodated slip at a variety of rates from creep to seismically, in protoliths ranging from quartzite to ultramafics. We are also interested in the relationship between deformation and chemical transformations.