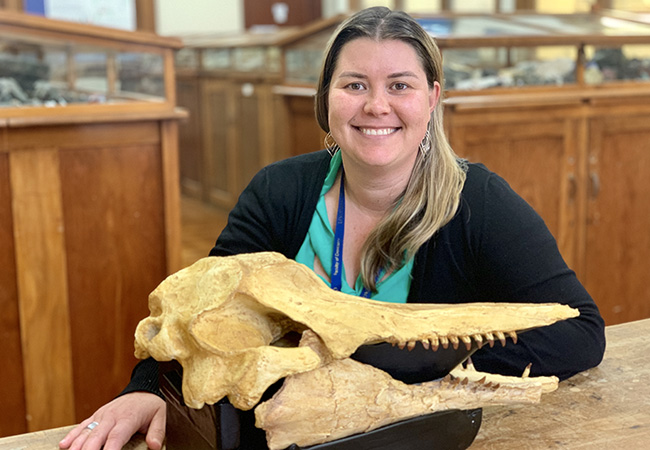 When Dr Carolina Loch was two years old she wanted to be a researcher. She has well and truly reached that goal, becoming one of the University of Otago 2019 Early Career Award for Distinction in Research winners.

If wanting to be a researcher at two years old sounds a bit unusual, so does much of her research – which focuses on ancient dolphin teeth, amongst other things.

But unusual or not, her achievements have been remarkable. She has published 36 papers in international journals since completing her PhD in Oral Biology/Palaeontology at the University of Otago in 2013. She has given more than 50 conference presentations, secured nearly $1 million in research funds since 2017, and won a slew of awards.

And while many of those achievements have come from her work studying the evolution of teeth in dolphins and whales, her research is far more varied than that; including the effects of vitamin D deficiency in human teeth, characterising new treatments for dental caries in children, and how baby and adult teeth can hold clues on rhythms of growth in humans.

“Nature is the textbook of life,” Dr Loch says, describing her drive to research. “And for me, science is one of the most truthful ways of understanding nature.”
Her research into marine mammal teeth follows that same philosophy – using the teeth to gather a wide range of information about the biology, evolution and interactions with the environment of fossil and recent species.

Her goal is to see that remarkable work lead to the University of Otago creating an “active and successful” research group in evolutionary oral biology, with New Zealand and Otago being seen as leaders in that field.

Which is exactly the sort of goal her childhood self would have approved of.

“The joy of discovery is one of the most amazing feelings one can experience, so I keep that passion for discovery and curiosity alive with my research and teaching.”

Dr Loch says she feels “honoured and humbled” to be recognised “among such talented early career peers”.

“It is an indication my research career is moving in a positive direction and making relevant impact. I hope this award can help in paving the way for greater things. Watch this space!”