This is Case Study Four for the Research Impacts study. 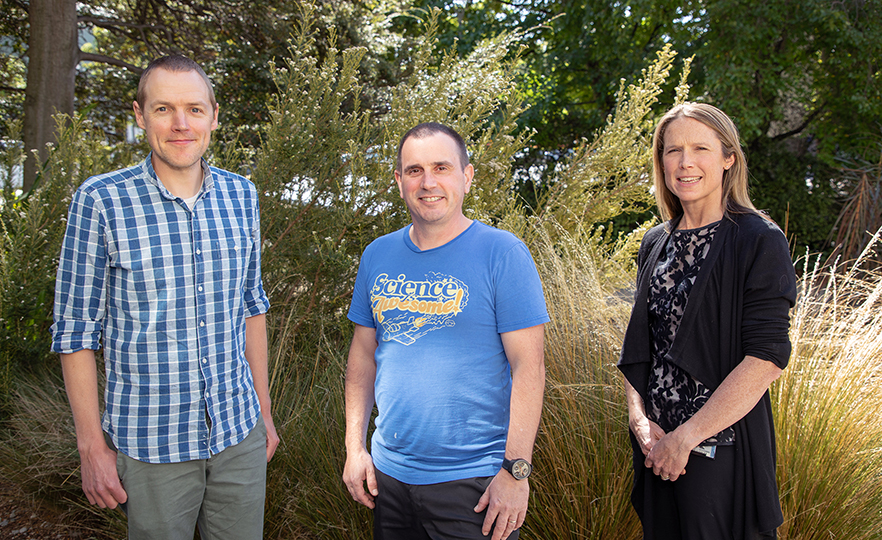 Associate Professor Peter Mace is a biomedical scientist who discovered several structures of a protein with an important role in inflammation, as well as potential roles in some cancers. Impacts of Peter’s research to date include building capability in students and staff, creating collaborations and advancing knowledge. Peter has achieved this by addressing knowledge gaps, trying new ideas, building relationships, and disseminating his research findings widely. Potential future impacts include using the protein as a drug target for the treatment of cancer.

Associate Professor Peter Mace is a structural biologist. The wider aim of his research is to discover the 3D structure of proteins and the influence of structure on function. From his initial discovery in 2014, several structures of a protein called Tribbles have been solved1,2. Tribbles is encoded by the TRIB1 gene, which is important in inflammation and cancer. The Tribbles protein family is named after a small, furry creature from Star Trek that reproduce rapidly3. Within the cell, the protein produced from the TRIB1 gene plays diverse roles in cell development and signalling4.

In 2013 Peter established his laboratory with funding from a Rutherford Discovery Fellowship in the Department of Biochemistry at the University of Otago. Peter initially looking at the basic biology of proteins similar to Tribbles, then investigating Tribbles sequences. There was no structural information about these proteins, so there was space in the field to research fundamental aspects of the 3D shape of these proteins and how they work. Peter found that Tribbles proteins were highly expressed in many cancers, such as breast cancer, and finding their structure and function could potentially lead to using them as a therapeutic target for drug development. Peter is leading the discovery of the structure of these proteins internationally, with several groups interested in the protein’s function. Overall, Peter’s research has resulted in a greater understanding of how Tribbles proteins are interacting at a cellular level, and what the consequences are of those interactions1, 2.

Peter and his collaborators* produced the first 3D images of the Tribble-1 using the Australian Synchrotron, which uses powerful X-ray beams to image a protein’s structure5. Peter’s team discovered that Tribble-1 does not have kinase activity, but has a switch-type mechanism when it binds substrates as the active site opens up. The major implication of this is that a large pocket then becomes available where potential small molecule drugs could bind. Research has shown that Tribbles-1 promotes acute myeloid leukaemia, and suggest it could also be involved in breast cancer, so the development of a drug targeting Tribbles-1 could improve outcomes for cancer patients. Breast cancer and leukaemia have the greatest and the 10th-greatest incidence of all cancers in New Zealand, with 87.3 people and 8.8 people affected per 100 000 respectively. The annual public cost of breast cancer is $76.8 million (based on 2008 figures) and $68.5 million for leukaemia6, 7.

Breast cancer researcher Dr Anita Dunbier, who is also in the Department of Biochemistry, collaborates with Peter to explore the connection between breast cancer and Tribbles. Peter approached Anita after he found that Tribble-1 was over-expressed in breast cancer; together they have co-supervised a PhD student Hamish McMillan whose work is focused upon understanding the protein’s interactions. A key part of the project used a novel technique called Rapid Immunoprecipitation of Endogenous Proteins (RIME), enabling researchers to examine the protein in the cell in a natural situation to identify the other proteins with which it is interacting, revealing more about its function and potential role in breast cancer.

Peter is also collaborating with Dr Karen Keeshan’s (University of Glasgow) laboratory to investigate the role of Tribbles proteins in leukemia. Her lab is working with mouse and human models of leukemia, which is one further step nearer to human studies. They are also developing protein reagents that specifically change levels of Tribbles proteins, which may be applicable in cancer-specific models.

After receiving additional funding from the Health Research Council (HRC), Peter continued to carry out structure determination studies and develop research capability through supervision of an assistant research fellow and senior technician in the lab, and co-supervision of PhD students.

“The work we do is at one end of the process, it might be several steps removed from getting to a patient, but I feel like if we can see how proteins work by solving their 3D structures, inherently other people who’re studying those proteins are going to find they’re useful. I feel like that’s having impact.”

“ Peter’s good at finding new techniques, and I help to get them to work. You certainly have to be prepared to try a lot of new things, that seems to yield results”.

“If you’re going for impact in the health sector, you need to be thinking about the use of your research. Make sure you understand the problem, and the clinical problem, and know what’s relevant”.