Give nothing to racism

On Thursday 21 March 2019 the University of Otago hosted Chief Human Rights Commissioner Paul Hunt. His public lecture – delivered just days after the tragic shootings that claimed the lives of 50 Muslims in Christchurch – explored how we can all create the types of positive change exemplified by the Give nothing to racism campaign by having the courage of our convictions.

Sometimes it lives in everyday actions and comments that we laugh off, nod in agreement to, excuse, and therefore accept. But we don’t have to. We can stop casual racism from growing into something more extreme. We can give it no encouragement. No respect. No place. No power. We can give it nothing.

The University of Otago is joining the New Zealand Human Rights Commission’s national campaign to combat casual racism in our society.

Otago’s core values include a strong sense of equity and social justice; the highest level of ethical standards; and collegiality and collaboration across our entire community.

Why we support the Human Right Commission

Racism is a problem in New Zealand. It isn’t new and it’s growing: 1 in 3 complaints to the Human Rights Commission are about racial discrimination; most people who experience racism don’t complain; and we’re seeing an increase in overt racist attacks. People from some ethnic minorities tell us they’re scared and they’re particularly scared for their children. Many Kiwis don’t think racism is a problem, often because they’ve never experienced it themselves. We suspect many of us don’t realise when something we say is prejudiced: but we would if someone pointed it out to us.

We know most New Zealanders aren’t overt racists but sometimes we say and do things we don’t realise are discriminatory. Sometimes we allow casually racist thoughts, actions and comments into our lives and while we know they’re wrong, we let them stand. This is how prejudice starts. It starts small. When we encounter these little pieces of racism because we’re human and because we don’t like tension, we’ll laugh it off, excuse it, pretend it isn’t what it is. When we do this to racism and intolerance we passively agree with it. And this is how we help it grow.

Why we should give nothing to racism

By giving nothing to racism we refuse to indulge it, we refuse to let it flourish, we refuse to welcome it. We want New Zealanders to challenge our own prejudices, because they’re passed on to the next generation with the subtlest of teachings. Prejudice starts small, on the streets we live in, at the places we shop in, and it grows when good people allow it.

Hate starts small but so too does hope. We want New Zealanders to challenge ourselves and our loved ones to treat each other with mana. This is about making a stand about the kind of country we live in and the kind of people we are.

We hope you will join us. 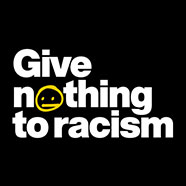