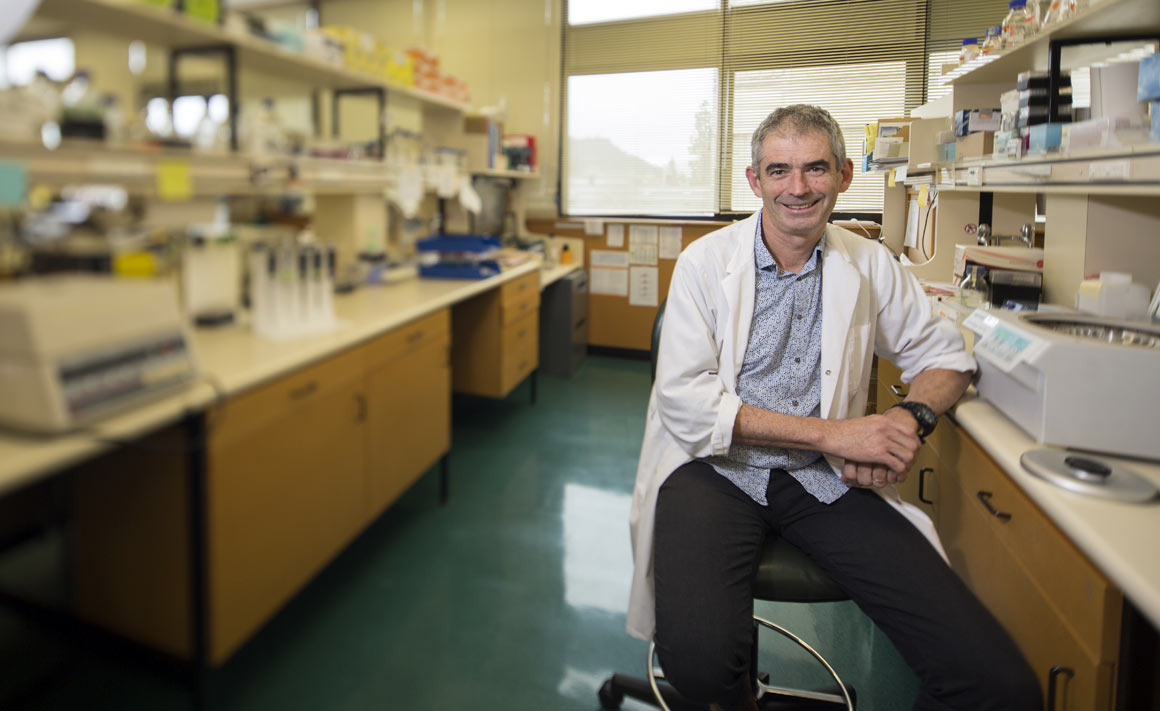 Now he is turning his attention to a new cancer diagnostic tool that promises significant benefits for patient treatment and outcomes.

Professor Parry Guilford takes a moment to recall the subject of his 1983 master’s thesis. Small nuclear ribonucleic acids, or snRNAs. It’s been a while since he thought about that early genetic work, probably because not long afterwards Guilford’s career veered somewhat serendipitously – but completely fortuitously – into the field that has dominated molecular biology ever since then: the application of genetic science to medical research.

It was almost an accidental move, but applied medical research proved to be the calling which has “spun his wheels” ever since. Indeed, even one of Guilford’s research breakthroughs – the discovery of the first-known gene for inherited gastric cancer; the development of a simple-to-use, non-invasive diagnostic test for bladder cancer; the localisation of the first genes associated with familial, non-syndromic deafness – would be the crowning glory in any scientist’s CV. His achievements were recognised in 2017 with the University of Otago’s highest honour, the Distinguished Research Medal, but that doesn’t mean Guilford’s wheels are slowing down any time soon.

Oamaru-raised, Guilford completed his undergraduate and aforementioned MSc at Otago, after which he began working for the DSIR (now Plant & Food Research). The institute sponsored Guilford’s PhD in plant virus molecular biology at Darwin College, Cambridge, but after he returned to New Zealand he realised plant science no longer excited him. Guilford needed a change, not just in job, but also lifestyle. Paris, he decided, would be the place.

He wrote to several research institutes, among them the Pasteur Institute. There his fax was received by geneticist Professor Christine Petit, who happened to have just a few days remaining in which to fill a postdoctoral fellowship her laboratory had been granted. Guilford convinced his DSIR supervisor to write him a reference and was duly offered the post. Dusting off his School Certificate French, he spent the next three years learning and applying (then) cutting-edge techniques in gene mapping as part of the pioneering wave in which the human genome was still being deciphered. 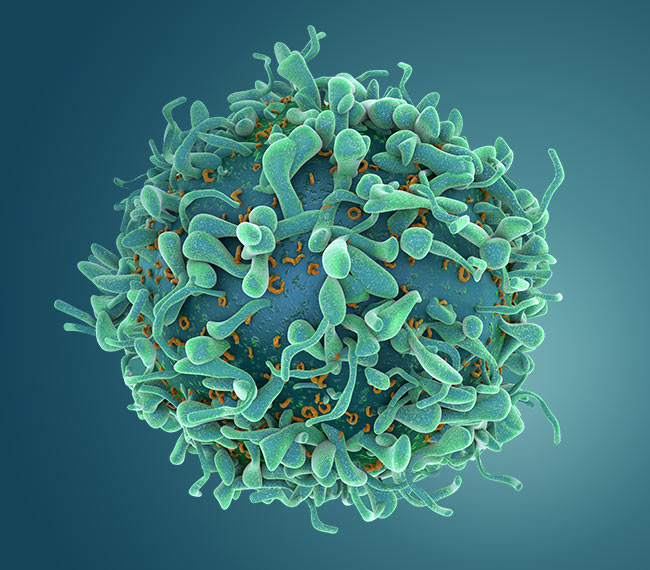 Guilford’s work with Petit on the cause of inherited deafness not only proved the genesis of his career as a cancer geneticist, it ignited a passion for laboratory-based work in a way that plant biology never had.

“Suddenly I really wanted to work. I spent much of my time working or thinking about work. I was determined to get the answer and find the genes we were after.”

The chance to make a real difference in people’s lives proved a powerful motivator so, when Guilford returned to New Zealand, he began hunting for human biology-based work.

He checked in at his old department where Professor Anthony Reeve told him there were no vacancies, but within a week Reeve was back on the phone: he had been approached by a Māori family with a strong history of stomach cancer and they wanted to find the gene responsible.

“You know how to find genes,” Guilford recalls Reeve saying to him, “so let’s go and meet this family.”

Guilford and Reeve spent time getting to know and earning the trust of the whānau, who gave the researchers access to blood samples and also tumour samples from family members who had died. After three years, Guilford’s team found the gene mutation that was decimating the family – he still has the handwritten, taped-together pages of the whānau’s family tree on which a sobering number of black dots record those individuals who have fallen victim to the disease.

The gastric cancer gene discovery remains, hands-down, the highlight of Guilford’s career to date, “partly because I had such an emotional attachment to the project,” he says, “and partly because the result came through in a clearly identifiable moment, when we were looking at the computer and saw the DNA bands appearing like in a Space Invaders game.”

Guilford, however, is also quick to credit the whānau.

Perhaps not surprisingly, Guilford then concentrated on cancer detection, initially targeting four different cancers. He and Reeve soon became frustrated, however, by a lack of funding for the commercialisation of research findings. This led to the establishment, in 2001, of the company Pacific Edge Ltd and, ultimately, the launch of its diagnostic testing kit for bladder cancer, Cxbladder. The product is currently being rolled out across New Zealand district health boards and has already been released into the North American market. It will save hundreds – if not thousands – of lives.

Guilford remains chief scientific officer at the biotech company, where the focus has necessarily shifted to market validation, but his primary focus these days is the Cancer Genetics Laboratory, a key part of the University’s virtual Centre for Translational Cancer Research. Here he is principal investigator, working to identify a drug treatment that will inhibit the growth of stomach cancer, a treatment also likely to be effective for a sub-type of breast cancer that shares the gastric disease’s molecular characteristics. With clinical trials only five or so years away, Guilford reports he and his team are on track to realise this goal.

At this point, Guilford leaves his office momentarily, returning with a photo of two small children in his hand.

“These kids have a one in two chance of carrying the [stomach cancer] gene,” he says, adding that gene carriers have a 70 per cent chance of developing the disease. “The family sends us photographs of them growing up and I put each one up on the noticeboard. They remind people in the lab that what we do is important, but also that we are up against a ticking clock, because by the time those kids are old enough to need treatment, we need to have one for them.”

Guilford’s other main focus – equally compelling – is a new cancer diagnostic tool. This exploits the diagnostic potential of a phenomenon called circulating tumour DNA, in which mutated DNA fragments derived from a tumour make their way into a person’s bloodstream. These can be identified with DNA sequencing technology and the level of their concentration used to gauge the extent of tumour present. The particular tool Guilford and his team are developing – at present being applied to instances of colorectal cancer, breast cancer and melanoma – is designed to measure an individual’s response to treatment.

It works like this: the researchers identify a marker for a patient’s particular disease by identifying the mutated gene associated with the cancer. They then go looking for traces of that mutation in the patient’s blood, comparing levels of the marker pre-treatment with those during and after treatment.

“The number of copies of that mutation in the blood is an indication of how much tumour is present and, therefore, how successful treatment has been,” Guilford explains, adding that when treatment is going well, “the levels drop like a brick”.

The technology also allows clinicians to detect ineffective treatment much sooner than has been previously possible.

"At the very least, one outcome will be that we can take patients off futile treatment sooner – rather than waiting weeks for a CT scan that shows treatment did not go well, we will be able to tell within a week or two if it is worthwhile."

"So [the test] saves money, stops the patient enduring chemotherapy which is doing nothing for them and produces a rapid read-out on whether a treatment is effective. It also enables us to easily monitor a patient after treatment. With the first sign of the cancer returning we can try a second treatment. It enables us to really personalise a patient’s treatment.”

The technology promises strong benefits for New Zealand, especially now that Guilford and his team have validated technology that extends the stability of blood samples, enabling them to withstand the rigours of transportation over time and geographic distance.

“People won’t have to drive to a hospital to have a CT scan – they can just give a blood sample at their GP’s, which goes to the lab, with the results coming back to the doctor. That makes it much easier for patients, reduces costs for hospitals, and means we can reach out to groups – Māori in particular, but also Pacific Island communities – who are pretty averse to going to city hospitals. That’s one of the attractions of the technology; not only is it accurate, but it gives us a chance to reach people better than in the past, especially in rural communities.”

Early disease detection through accessible technology such as this promises better patient outcomes, with the myriad benefits that represents.

“If you detect the disease early enough, you can respond rapidly and a cure through surgery is possible,” says Guilford. “In more advanced cases, more treatment will be required, but oncologists will be a lot more nimble and able to respond quickly to any changes in the cancer’s characteristics.

"Slowly, but surely, we can turn cancer into a chronic disease that can be managed."

Of course, the other factor in the complex cancer management equation is the role of environmental factors. Guilford has lately turned his attention to this area of research with a new HRC-funded study investigating their place in the occurrence of stomach cancer. While any results of this research are likely several years off, one thing is clear: Guilford’s wheels are still spinning fast, so watch this space.