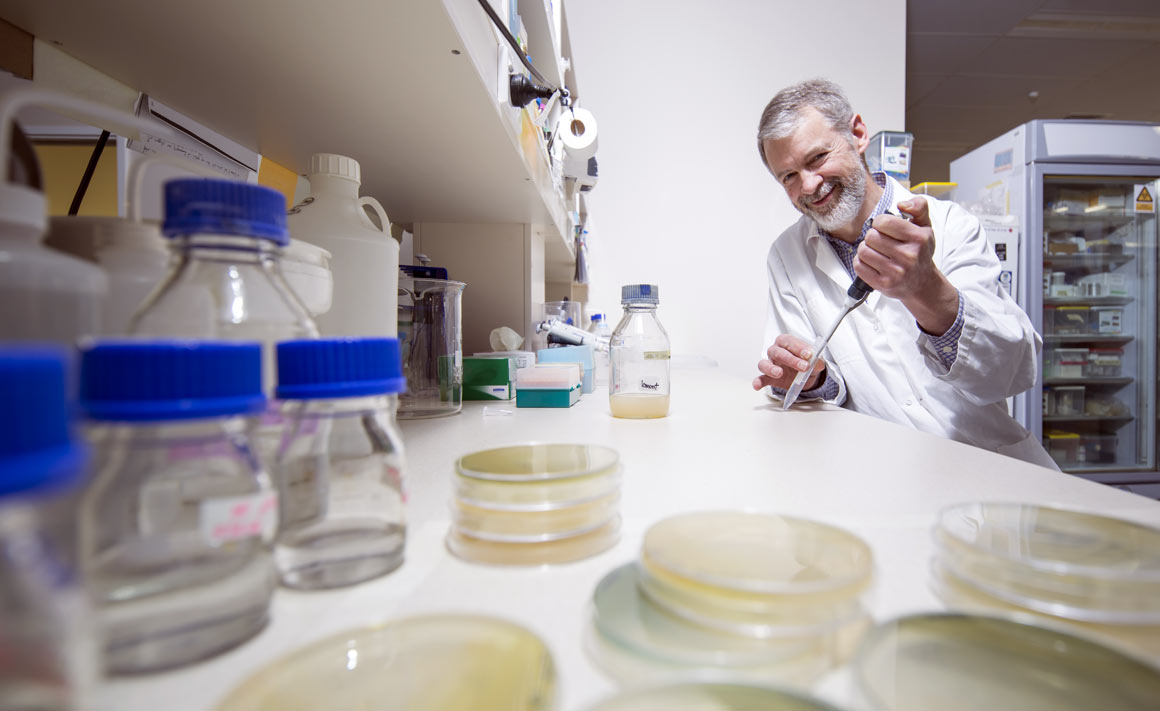 An Otago research project seeks to improve treatment for antiobiotic resistant superbugs by better understanding what makes them tick.

Professor Iain Lamont (Biochemistry) is leading a project to unmask the genes in a superbug that make it resistant to antibiotic drugs used to treat and prevent bacterial infections.

Lamont says that the rapid rise of superbugs – or bacteria that have become resistant to all available antibiotics – is an increasing threat to health, with the potential to overwhelm the health-care system. Every year, an estimated two million people around the world get sick from superbugs and about 23,000 die.

The three-year research project focuses on a particular species of bacteria, Pseudomonas aeruginosa, which is capable of causing very severe reactions in patients with predisposing conditions, such as cystic fibrosis or other forms of lung disease.

Lamont says that he has chosen this superbug for several reasons. “It is safe to study in a laboratory because it only affects people with a predisposing condition. It is intrinsically quite sensitive to antibiotics, but has the ability to rapidly develop resistance. It is well characterised and well understood. And it has been listed by the World Health Organization as one of the most difficult and threatening superbugs to treat.”

Every year, an estimated  2 million people around the world get sick from superbugs and about 23,000 die.

The superbug is well understood because the bacterial material the research team is using astonishingly comes from an infection from a wound in a patient in Melbourne in the 1950s. Lamont explains that it was originally used by a Melbourne microbiologist who was the first to undertake genetic analysis of Pseudomonas aeruginosa and has been kept alive and used as a “reference strain” by researchers around the world since then.

He acknowledges that our understanding of how superbugs such as Pseudomonas aeruginosa resist antibiotics is far from complete.

"When bacteria are chronically exposed to antibiotics, their genes change so that they can tolerate or resist the antibiotics. We do not have a full understanding of what those genes are that, when they are changed, cause the bacteria to become resistant."

Lamont explains that the research will mimic the process under controlled laboratory conditions. “We will grow the bacteria in a broth and then put them onto Petri dishes with antibiotic gel. Bacteria mutate very rarely. In a small bottle of a thousand million bacterial cells, maybe a dozen would be more resistant to the antibiotic than would be the starting bacteria.”

Lamont says that they will repeat the process by growing the surviving cells, using increasing amounts of antibiotic each time, and compare the genes of the starting bacteria with those of the antibiotic-resistant mutants.

Lamont is optimistic about the research project’s outcomes. “The results will provide a major step forward in understanding how bacteria resist antibiotics and may lead to improved treatment regimens for Pseudomonas aeruginosa and other superbugs.

“Our long-term hope is that we can better use the antibiotics we already have by better targeting the antibiotics for individual patients. The other possibility is that we will be able to be more precise about how long a particular person can use an antibiotic without the bacteria becoming resistant to the antibiotic.