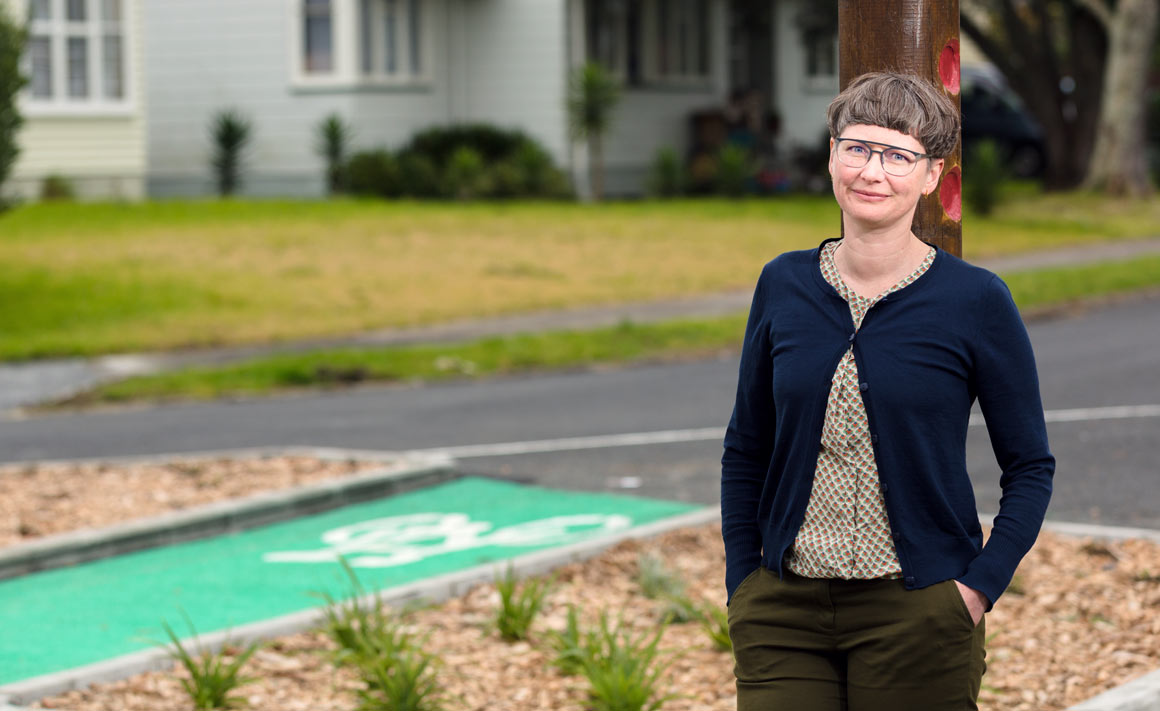 A world-first intervention study of suburban street design aims to improve public health outcomes by changing the way people drive or – even better – getting them out of their cars.

The Future Streets project is challenging traditional transport infrastructure design by putting the local community’s use of local streets first.

Typically research in this area piggybacks on transport infrastructure initiatives planned and implemented by the infrastructure providers. In Future Streets, however, researchers in public health, social sciences and psychology have collaborated with the community, as well as the infrastructure planners and providers, to come up with a co-designed intervention that draws on both community knowledge and best practice from previous research.

As public health physician Dr Alex Macmillan – the project’s research lead – explains, the arguments for changing the way we get from A to B are pretty compelling.

“Good health doesn’t start in hospitals and GP clinics – it starts in people’s houses and neighbourhoods; in how we design the places where people live, work, play and go to school; and how people get to those places. So our cities, their environments and transport, in particular, are crucial to people’s health.”

“For example, some of our biggest health issues are a lack of physical activity, air pollution and road traffic injuries. This also creates injustices in access to health care, education and jobs, because in a city that’s car-dependent you can only readily access such things if you can afford to and are physically able to drive, own and run a car.”

“To protect our future health from climate change we can’t just rely on technologies like electric vehicles, we need to re-shape our transport system to include more public transport, walking and cycling as well.”

The researchers identified two research sites, Māngere Central and Māngere East, which are similar in terms of the kinds of amenities people can access by walking and cycling, as well as neighbourhood deprivation, ethnicity and population size. One suburb was deemed the “control” and the other earmarked for intervention. Baseline measurements such as road traffic injuries, air pollution levels, physical activity, and sense of social connection and safety were taken in both.

“Having the chance to choose two areas and throwing a coin to determine which would get the intervention, then following up the same participants before and after the intervention are other firsts for this kind of study,” Macmillan adds.

“It was particularly important for us to understand what would work in a predominantly Māori and Pacific community, so that we can begin to address some of the health inequalities built-in by current urban design."

"This is why another unique feature of the project was to incorporate Māori principles of landscape design (Te Aranga principles) in partnership with local iwi.”

The researchers developed relationships with residents by fronting up in the streets, schools, markets and marae. Through this korero, researchers identified road-related issues for residents as well as their aspirations. There was a lot of concern, for example, about child pedestrian safety and safety from crime in parks. All this feedback, along with research-based findings, influenced the design of infrastructure “retrofitting” initiatives that were then developed and implemented.

Initiatives include “self-explaining roads”, created by physical adaptations such as street narrowing and tree planting, that radically alter driver behaviour by telling a different story about what streets are for. A crescent that was notorious as a “racetrack” was closed off, parks and walkways redesigned, and cycleways and protected cycle lanes introduced.

With the infrastructure initiatives now completed, the researchers have begun the follow-up phase. The first follow-up measures are being completed now, but behavioural change can take time, so health indicators will be measured and analysed for upwards of two years.

In the meantime, the project has already begun to have a wider impact on transport decision-making, with Auckland Transport and NZTA interested in implementing the innovative ideas about streets and community co-design further afield.

“Auckland Transport has also had to revise how it thinks about roads,” says Macmillan, “not just as throughways for freight and people, but as part of the community.”

Next:
Pain of ageing