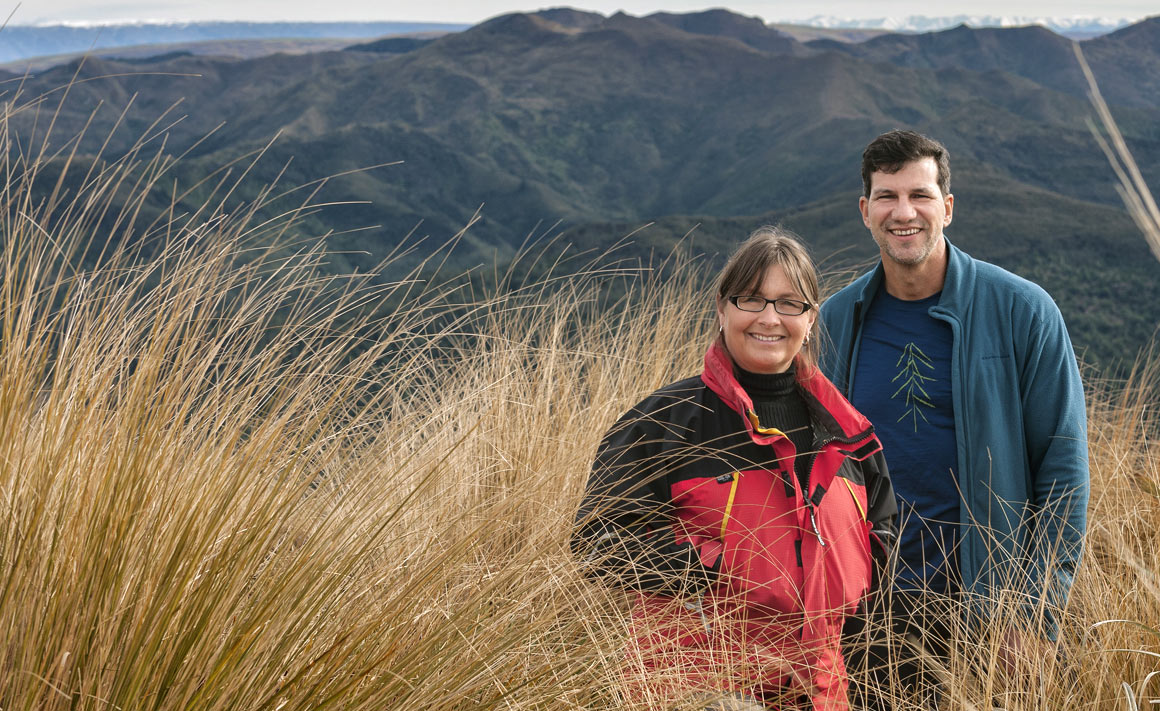 An extraordinary combination of generosity and far-sightedness has presented Otago scientists with an unprecedented high-country research project covering an area larger than some national parks.

Mahu Whenua (healing the land) is the vision of international record producer and songwriter Robert “Mutt” Lange, who is encouraging University research on 53,000 hectares he owns between Lake Wanaka, the Cardrona Valley, Arrowtown and the Shotover River.

Since buying the stations of Motatapu, Mount Soho, Glencoe and Coronet Peak, Lange has partnered with the Queen Elizabeth II Trust to create New Zealand’s largest ever private land covenants covering 95 per cent of the area, ensuring its natural values remain protected indefinitely.

For Zoology’s Professor Phil Seddon, co-director of the Catchments Otago research theme, it’s a unique opportunity to see how theories about conservation and restoration work out in practice.

For Lange, Mahu Whenua is an idea he’s nurtured since his Soho Property company began buying the land in 2003. After discovering the low alpine landscape, its history and its native plants and animals, Lange wondered if it was possible to retain and restore its values in conjunction with farming.

With advice and guidance from his Arrowtown-based New Zealand manager Russell Hamilton, Lange is confident he’s realising the dream: “Through truly sustainable farming, with economical and ecological elements working in harmony, we are healing a land that many felt had been lost forever.”

The private project is a natural fit for Catchments Otago, which uses a multidisciplinary approach to investigate how best to share natural resources while considering environmental, social and economic outcomes.

Following the launch of the protective land covenants, Seddon and other researchers approached Soho Property to discuss the University getting involved. With permission granted, Seddon gained a University of Otago Priming Partnerships Grant to provide seed funding for the collaboration.

In the summer of 2015-16, teams from the Departments of Zoology and Botany and the School of Surveying began baseline mapping and ecological surveys.

“We presented and discussed our results with the QE II Trust’s Rob Wardle and Soho Property’s Russell Hamilton, and we agreed the work was well worth progressing.”

A new agreement was drawn up, with funding from all three partners for more detailed studies in 2016-17, working towards the long-term aim of enhancing the bio-physical understanding of the Mahu Whenua area, guiding protection and restoration, and exploring new models for integrated landscape management.

Associate Professor Antoni Moore (Surveying) led landscape mapping and researching the history of the land, including how human impacts such as burning, mining and grazing had changed things over the years.

Botany’s Dr Janice Lord and postgraduate students focusing on restoration dynamics investigated the vegetation and revegetation following the significant progress Hamilton and his staff had already made in restoring original habitat.

Aquatic ecologist Dr Christoph Matthaei (Zoology) headed research into the health of streams and the invertebrate life in them.

“We were surprised to find no fish in large parts of the system. It’s possible that chemicals used in mining long ago killed all the fish above an old weir by an historic power station near Arrowtown. With fish unable to pass the weir the populations never recovered.

“But the stream appears healthy now and the invertebrate populations are healthy too so, as it has no introduced species such as trout, it may be possible to reintroduce native species there.”

Other endangered species such as takahe and kiwi might even find a home at Mahu Whenua in time, potentially making the area a role model for the rest of New Zealand.

“It would need landscape-scale control of introduced predatory pests – stoats, ferrets and feral cats – probably involving an initial knockdown with poisons and then trying to keep the numbers low. DOC has done something similar in the Tasman Valley at Aotearoa Mount Cook. With ground trapping they’ve shown signs of improving breeding success for native species in braided river systems,” Seddon says.

“Fenced eco-sanctuaries are very expensive and we need to think on a much bigger scale to reduce pests in New Zealand. Mahu Whenua could be one of the places where that could happen and it could show what could be done in Alpine dry regions.

“Mahu Whenua is a unique opportunity for scientific research and landscape restoration."

"Mutt Lange and Russell Hamilton are very serious about making a difference and have the resources to do it, and we want to ensure our contribution is helpful to the overall project.

“They want to see if we can restore these lands while keeping some level of productivity, so the future could bring new ways of farming that would be compatible with the environment.”