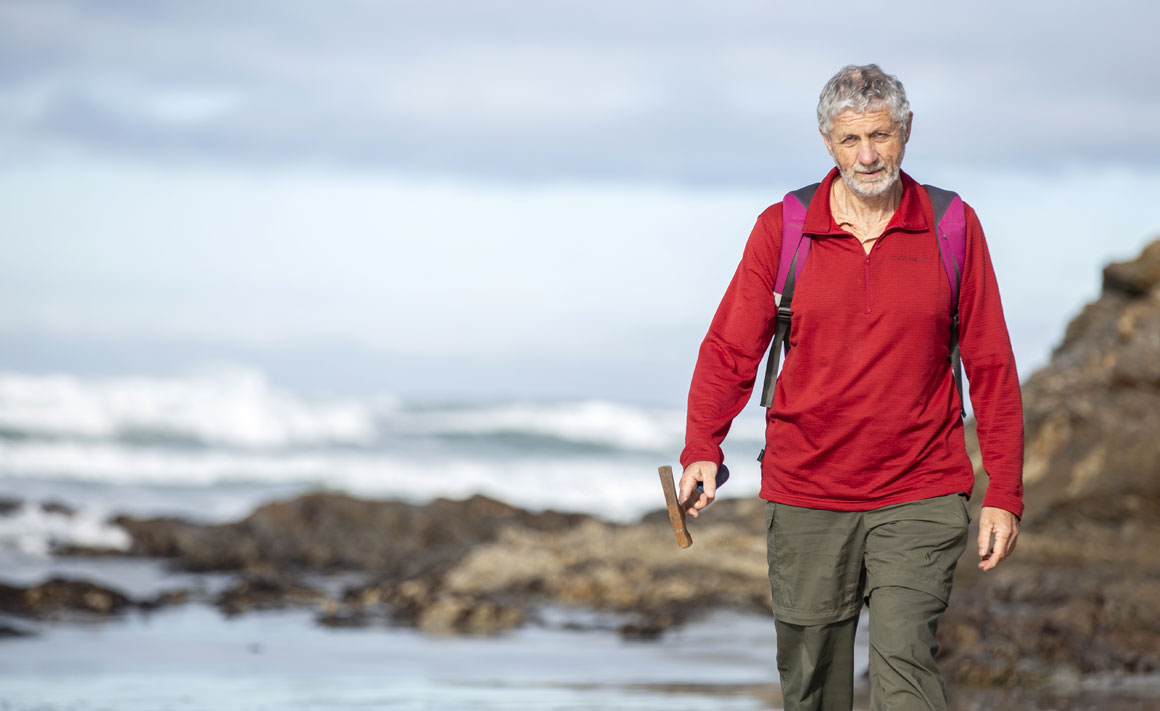 2018 Distinguished Research Medal winner Professor Dave Craw is an Otago man and Otago is gold country: unsurprisingly, this has been a focus of his work as a geologist.

Many of the processes that are “bread and butter” for geologists are still happening around the Otago region. For Professor Dave Craw (Geology), the 2018 recipient of the University of Otago’s Distinguished Research Medal, that has made it the perfect place to be for much of his 35-year career.

"It's all happening now. New Zealand has young geology and Otago's got a good combination of a little bit of older stuff with superimposed younger stuff – so you can unravel that with pretty high confidence of what the processes are and what they were in the past."

Otago born and bred, Craw had been interested in geology since he was young, so studying it at Otago was a natural step.

"Back in those days there were advertisements in the newspapers for geologists. I used to do a lot of mountaineering and tramping, so it all sounded pretty good – being paid to go and do that."

One of his first jobs as a government geologist took him to Antarctica, before getting involved in an ongoing research programme at Otago.

Towards the end of his PhD he began teaching at Otago’s School of Mines, but when it closed Craw took his expertise back to the Geology Department, tackling mineral deposit research. Given that Otago is gold country, the precious mineral became a key focus of his work.

"When Macraes Mine started I got involved at all stages, right through the mining and environmental sides,” he says.

"It is also a great place for students to get experience. The company enjoys having people around with new ideas and new ways of doing things, so it's been a very good relationship."

Although Macraes is a hard rock mine, extracting tiny traces of gold lodged in other mineral deposits, Craw also collaborates with the region's alluvial gold miners who work river beds.

"Gold can tell us quite a lot about how geology put Otago together, so it's a two-way thing," says Craw.

"Gold is very persistent in the environment and when you find gold it is telling you something about geology. I have followed that up all over the world and it's been fun."

This knowledge of gold has dovetailed into research with zoologists, looking at the effects of geology on evolution.

"I've been working with Professor Jon Waters [Zoology] on that since the late ’90s. Again, it's all tied up with the distribution of alluvial gold because it is in rivers – and so are fish.

"The geological effects on rivers, such as the uplift of mountains, can affect where the gold is and where the fish are. They are all inter-related."

Craw says the Waikaia Gold Mine in Southland – the region's largest alluvial gold mining operation – is a great example.

"There is a big range of mountains between it and Otago, but the gold all came from the Otago side.

"Before the uplift began, about five million years ago, the gold was being transported from Otago towards Southland by river systems. But when the mountains came up, the fish were separated and the gold was separated from its source," he says.

"We can use geology to date when those populations of fish were separated, then look at how their DNA has changed over that period and that gives us some idea of the rate of evolution.

"These things go both ways. If we've got an unknown geological event, but we know about the fish, then we can date that event."

Over his distinguished career Craw has been awarded several Marsden grants, the most recent around gold nugget growth.

"One of the questions that's been around for a thousand years or more is where do gold nuggets come from and how do they form? One of the possibilities that's thrown around is that there is a biological component, some bacterial input."

To answer that question, Craw has worked with experimental and field microbiologists to look at possible biogeochemical pathways.

"We were looking at both the inorganic and the organic potential for gold nugget formation. The conclusions were that most of the nugget formation was chemical, although in the latter stages you could get biological gold added as well," he says.

"If you start with the Macraes gold which is tiny – at micron scale: when it gets up to the surface, the groundwater moves it around in solution over time and you get a smaller number of larger particles and it just keeps on going. The longer the system works, the larger the particles will be."

In other words – gold attracts gold.

"When the gold gets into the rivers a similar thing happens there, although there is a biological input," adds Craw. "Bacteria don't like gold so they get rid of it and pass it through their system and expel it and make small gold crystals."

Although it was a novel discovery, Craw portrays it as pulling together existing strands.

Environmental aspects of mining have always been to the forefront for Craw. Over the last 20 years, in particular, he has seen a huge burst in research on mine-related environmental issues, ranging from mining run-off to post-mining restoration of areas.

"Doing things like reinstating top soil and vegetation is just part of the cost of business. It's just part of being organised really."

He has also worked on old abandoned mines, such as the Wangaloa coal mine near Kaitangata, which he says was “basically trashed”.

"The main problem with the old mines is they buried the soil because they didn't worry about that. If you want to revegetate, you are planting into rock basically and different rocks affect plants in different ways – they don't get the nutrients and water.

"So I work with biologists and ecologists to find solutions."

With retirement looming, Craw laughs when asked about his plans.

"My wife says I will just keep on doing what I'm doing now and not get paid. That's fine – I enjoy it."