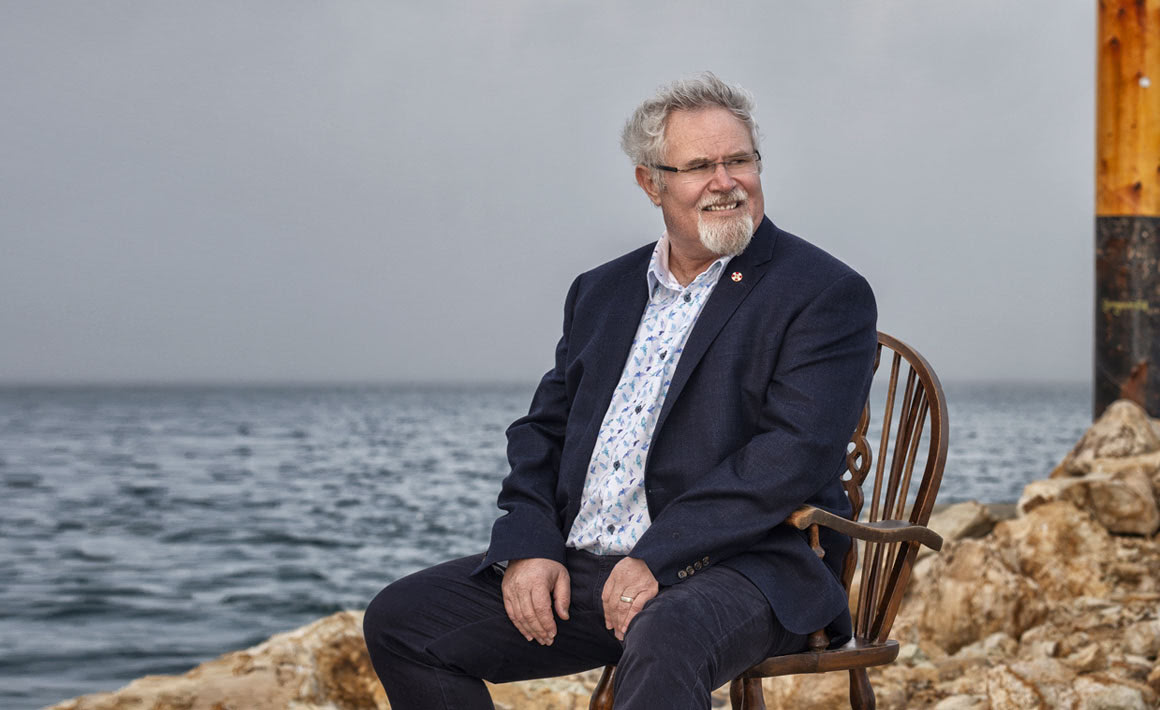 Professor Richie Poulton: “The logical extension of our first 1,300 papers is to begin to understand, in a far more in-depth way, what might be driving different ageing trajectories.”

The internationally acclaimed Dunedin Study is being reset. Building on its vast database of knowledge, using cutting-edge technologies and world-class expertise the study is now examining how we age. It is looking at why some people age faster than others – and how an extended life span might also be an extended health span.

After more than 45 years of following a thousand people through their lives so far, the Dunedin Multidisciplinary Health and Development Study (DMHDS or Dunedin Study) has hit the refresh button.

Born in 1972 and 1973, this group has become one of the most studied cohorts in the world and Dunedin Study Director Professor Richie Poulton says tracking the second half of their life course offers exciting new research possibilities around understanding the process of ageing.

“We looked at our strengths – our strongest streams of research – and what information we can build on to examine the ageing process,” says Poulton, who has been awarded the University’s 2019 Distinguished Research Medal. “We’ve also taken into account what the Global Burden of Disease Project is showing in terms of the major conditions or disabilities and challenges of the second half of the life course.

“We married those two sources of information and concluded that we needed to start or reinvigorate half-a-dozen streams of research, as well as continuing with our core business and building on the very good work done over the last 45-plus years.”

“All of these areas rank in the highest burden of disease estimates as made by the Global Burden of Disease Consortium. We also have early life information gathered many years ago which is relevant to understanding the evolution and development of all these conditions.”

Poulton says they studied the vision health of their participants in the first decade of life and monitored it on several occasions. In the case of hearing, they carried out detailed work over the first 15 years of life.

“It provides us with a unique opportunity to examine the degree of connection between early-life sensory abilities and later-life function in hearing and sight.

“Critically, this will allow us to also lay a baseline for studies over the next 40-plus years as those systems start to degrade.”

Gisborne-based ophthalmologist Dr Graham Wilson is particularly excited at being able to use avant-garde technology, from 3D head scanning to artificial intelligence developed in Dunedin.

It is probably the only study in the world able to examine how vision changes over four decades and get a natural history of the need for glasses – an area of special interest given the global myopia epidemic.

Aside from testing sight, Wilson says the eye is “truly the window to the soul” and can be a biomarker of many aspects of health.

“We can correlate the retinal blood vessels with the blood pressure and systemic vascular status. The eye is probably a biomarker of dementia and we will also look at the effects of cannabis on the eye. This research really fits in well with the Dunedin Study’s multidisciplinary work.”

“The eye is probably a biomarker of dementia and we will also look at the effects of cannabis on the eye.”
Dr Graham Wilson

“… this study covered preschool to the forties and found that a slow walk is a problem sign decades before old age.”
Professor Terrie Moffitt

“About a quarter [of participants] showed some degree of hearing loss, mainly for high-pitched sounds.”
Professor Suzanne Purdy

“More than 65 per cent of Dunedin Study members reported having bodily [muscles/bones/joints] pain that lasted for at least a week in the past year.”
Professor David Baxter

“The most exciting part will come when we compare our data to other health measures collected by the wider Dunedin Study team.”
Professor Mark Hampton

Researchers across the study are excited at being able to tap into the latest available technology and techniques, ranging from carbon isotoping to genomics and MRIs.

Carbon isotoping is being used in dietary research to try and overcome some pitfalls of relying on people’s recall of eating habits by using chemical probes to assess exposure to good and bad dietary components, including sugar.

Ahmad Hariri, Professor of Psychology and Neuroscience at Duke University in America, who has been working closely with the Dunedin Study team and Pacific Radiology, says these data will revolutionise our understanding of how different life histories map onto brain health in mid-life and how this then sets the stage for healthy and unhealthy ageing.

“We have already made important discoveries about mid-life brain health using the MRI data collected. For example, we have learned that small micro-lesions in the brain, previously thought to exist only in the elderly, are in fact present in mid-life and already signal a decline in cognitive abilities.

“This finding presents a new opportunity to track changes in brain health decades earlier and use it to improve health and well-being throughout ageing.”

Duke colleague Professor Terrie Moffitt, a long-standing partner and Associate Director of the Dunedin Study, has recently released findings showing the walking speed of 45 year olds can be used as a marker of their ageing brains and bodies.

“Doctors knew that slow walkers in their seventies and eighties tend to die sooner than fast walkers their same age, but this study covered preschool to the forties and found that a slow walk is a problem sign decades before old age.”

Professor Suzanne Purdy (University of Auckland) is a member of the new hearing research team who, alongside colleagues Professor Peter Thorne and Dr Joan Leung, have developed a hearing assessment protocol capable of establishing a lot about hearing, auditory processing and perception of hearing difficulties in just 30 minutes.

They found that the 938 study participants tested already showed signs of hearing ageing, with men, in general, having more hearing difficulties than women.

“About a quarter showed some degree of hearing loss, mainly for high-pitched sounds. People with poorer hearing in the high frequencies had more difficulty recognising speech in background noise.”

They are also investigating occupational factors in relation to hearing loss.

Then there are the aches and pains – ageing’s impact on musculoskeletal health and dysfunction – which are being put under the microscope by School of Physiotherapy researchers Professor David Baxter and Dr Ramakrishnan Mani.

“It is a key area in ageing well, and a major source of disability in older people. We have focused particularly on back pain, a frequently persistent and costly condition,” says Baxter.

“Musculoskeletal pain is highly prevalent. More than 65 per cent of Dunedin Study members reported having bodily [muscles/bones/joints] pain that lasted for at least a week in the past year. Most interestingly, lower-back pain was the most frequently reported pain condition with varying levels of severity and interference in life.

“It is crucial to note that the Global Burden of Disease study found lower-back pain causes more disability than any other disease.”

Poulton admits their shift to focusing on ageing was not easy to sell to their funding partners initially.

“People said you can’t study ageing because your participants aren’t old yet. However, our conceptualisation of ageing is that gradual deterioration of multiple connected physiological systems is evident from the very earliest years.

“We have already mapped some risk pathways to poor outcomes. The logical extension of our first 1,300 papers is to begin to understand, in a far more in-depth way, what might be driving different ageing trajectories.” 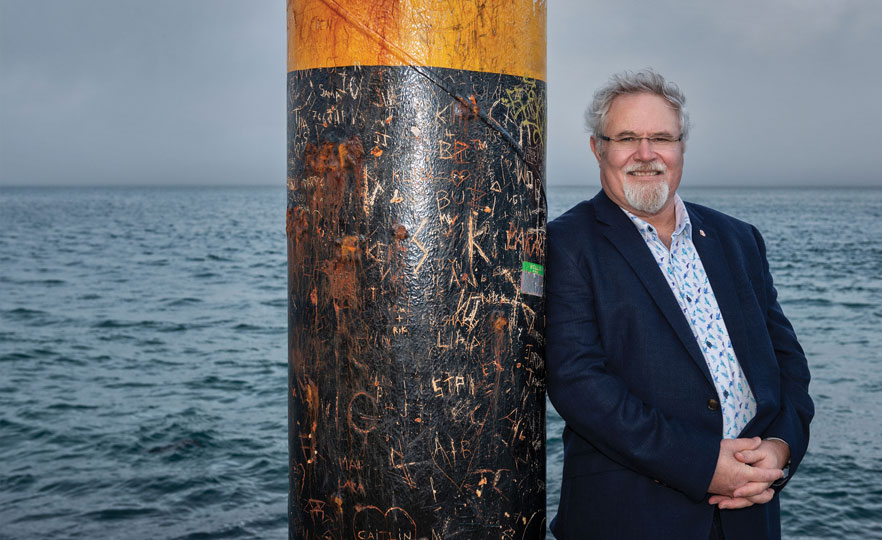 “Our study and others like it show many problems don’t just appear overnight, rather they have a gestation that is many decades in the making. This research will hopefully point governments towards more opportunities to nip things in the bud before they get out of hand.”
Professor Richie Poulton

He says it is obvious, even to the casual observer, that some people age more slowly than others, but the ones of particular interest are those who age more quickly, so their physiological age is much greater than their chronological age.

“It is assumed they are more likely to fall ill and develop chronic diseases and problems at a much greater rate. They will be the people who occupy hospital wards and specialist medical services long before the remainder of the population.”

To examine this they have recruited what Poulton describes as “local expertise of world renown” in the form of Professor Mark Hampton (Pathology) at the Centre for Free Radical Research in Christchurch, who will use novel techniques to track oxidative stress and how it drives the ageing process.

“We have performed a number of different tests on each blood sample. Some we have developed ourselves, including taking blood cells and placing them under an artificial oxidative stress to determine how well they cope,” says Hampton.

“As this is the first time some of these tests have been used, the results will be of interest to other scientists studying oxidative stress. The most exciting part will come when we compare our data to other health measures collected by the wider Dunedin Study team.”

Poulton says they are already beginning to provide a clearer picture of the nature of human ageing and it seems to support their key hypotheses.

“There are multiple physiological systems which are interlinked. They are deteriorating at certain rates, determined in part by the lifestyle that people lead, as well as genetic factors, with the interaction between the two adding a further layer of complexity,” he says.

“Most importantly, this research gives you a glimpse of potential points for intervention to either slow or correct deterioration so people can not only have an extended life span, but also an extended health span.

“Better health and well-being at an older age will also help delay the onset of non-communicable diseases such as dementia, heart disease and diabetes which so many public health experts are worried about.”

Gaining insights into the second half of the life course will also allow researchers to generate policy and practice recommendations and understand how early it is possible to tell if someone is on the wrong track and the likely most effective ways to intervene and build resilience against poor ageing.

“We believe this is going to have incredibly important implications in the 21st century where, for example, the health systems in many developed countries are buckling under the twin pressures of unlimited need and fiscal constraint,” says Poulton.

“Health spending is a black hole into which you can pour endless money and it would never be enough. That is because we have an out-of-date approach whereby we treat people after the problems emerge.

“Our study and others like it show many problems don’t just appear overnight, rather they have a gestation that is many decades in the making. This research will hopefully point governments towards more opportunities to nip things in the bud before they get out of hand.”

Poulton says right now many countries are also interested in the social concept of well-being as a better way of thinking about the status of both their citizens and economy rather than a single metric like GDP.

“We need to build a form of resilience whereby people and systems work together in a complementary way to ensure that everyone has the opportunity to participate fully in life without having to rely unduly on state intervention and support.

“The Dunedin Study is – with its vast database – superbly positioned to determine the most important constituents of well-being and to identify childhood antecedents in order to inform government policies aimed at protecting and/or promoting well-being for all. It also dovetails nicely with my other role as a government Science Advisor where I get the chance to pass on the knowledge generated by the most important people involved in the Dunedin Study – the study members.”