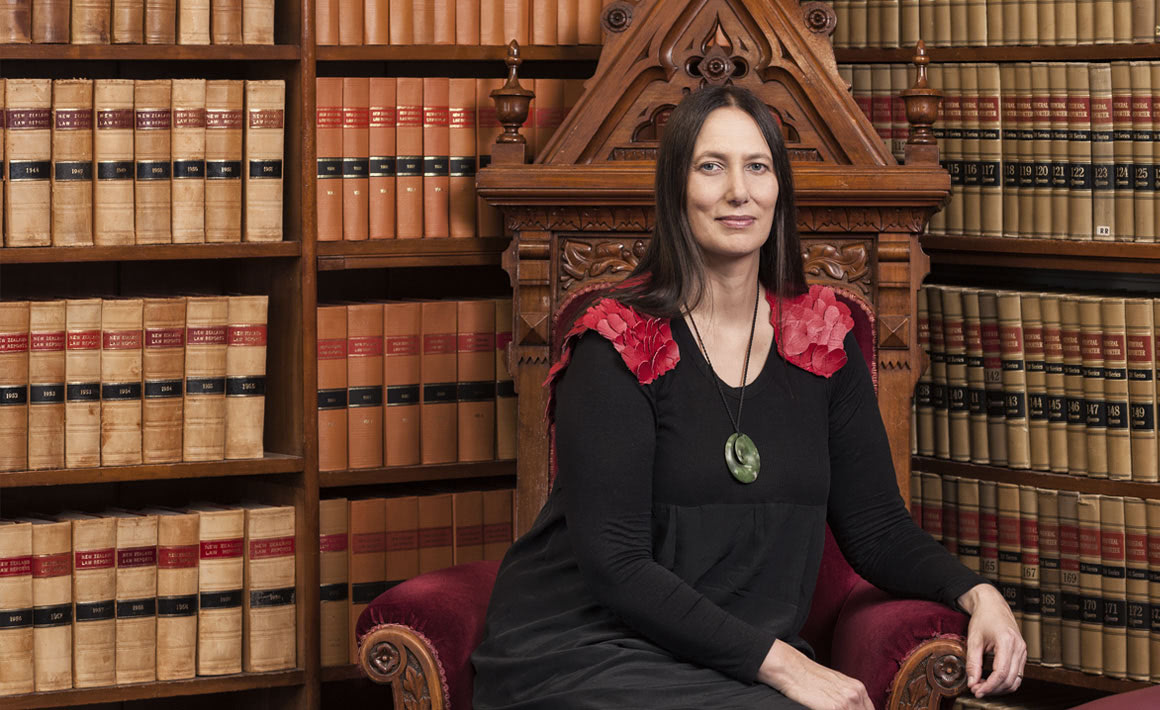 Professor Jacinta Ruru: “As a society, we need to find solutions as a country.”

Recalibrating New Zealand’s state legal system in order to challenge the Crown’s assumption of sovereignty over lands and waters treasured by Māori is no easy task. However, Professor Jacinta Ruru says it’s essential for future Māori health and prosperity.

It sounds like the start of a bad joke – a lawyer, a zoologist and an engineer were in a room… But no, they’re not changing a light bulb. Instead, this thought-provoking trio is set to change the nation’s state legal system.

Funded by Ngā Pae o te Māramatanga, New Zealand’s Māori Centre of Research Excellence, Ngā Ture o Te Tai Ao – New Laws for the Environment is a foundational project for the centre that seeks to build on the revisioning of laws begun by recent Treaty settlements and to move towards a brighter future of reconciliation and fairness.

“It’s a truly multidisciplinary mix of expertise,” says Ruru. “But all three of us really strongly believe if we are going to recalibrate our legal system, we need to bring a mix of different perspectives.

“Where appropriate, the project will build on the Waitangi Tribunal Ko Aotearoa Tēnei report to further develop legal principles and appropriate biocultural indicators to encourage a rebuild of state laws, policies, plans and models.

“Recent Treaty of Waitangi settlements provide the nexus for change and we plan to build on the globally innovative legal imagination already evident in previous legislative decisions.”

“This is in order to further empower tangata whenua to reassert their knowledge and build strategies for governing land, water and resources to advance flourishing Māori health, well-being and prosperity.”

Ruru says the current state legal system operates on the Crown’s assumption of sovereignty over New Zealand’s lands, waters and atmosphere. Outdated environmental legislation such as the Resource Management Act (now 30 years old) relies on a monocultural western idea of nature that doesn’t fit easily with a Māori world view.

But legal systems have the capacity to recalibrate and reflect the modern country and Aotearoa New Zealand’s legal system acknowledges change must occur.

“As a society, we need to find solutions as a country,” says Ruru.

“Recent Treaty of Waitangi settlements provide the nexus for change and we plan to build on the globally innovative legal imagination already evident in previous legislative decisions.”

She says these include the partial allocation to tangata whenua of the quota management system for commercial coastal fisheries (in 1992), tōpuni (cloaks) in the conservation estate (1998), co-management of the Waikato River (2010), the possibility for recognition of customary marine title (2011), and the acceptance of legal personality concepts for Te Urewera (2014) and the Whanganui River (2017).

The multidisciplinary project will include environmental scans, interviews, wānanga, hui and high-level detailed legal, policy and science analysis, alongside Indigenous collaborations with groups around the world to better share knowledge, experience and solutions. By the end of the project, the group hopes to have a new theoretical knowledge for recalibrating the state legal system founded on principles that respect tikanga Māori.

Says Ruru: “This project provides the critical opportunity to contribute a significant theoretical consideration of how ngā ture and tikanga Māori – concepts of what is right, correct, just, fair and including key concepts like whanaungatanga, arohatanga, mana, kaitiakitanga, utu and tapu – can rebuild environmental law, policy, plans and models to support the dreams of a country committed to reconciliation.

“Focusing on the themes of empowerment and innovation, the overall aim of Ngā Ture o Te Tai Ao is to bring together a new cross-institutional and transdisciplinary team of researchers to build new knowledge steeped in science (including biocultural indicators) and mātauranga Māori for how Aotearoa New Zealand’s legal system could be recalibrated to better reflect the environmental governance aspirations of iwi, hapū and whānau.”