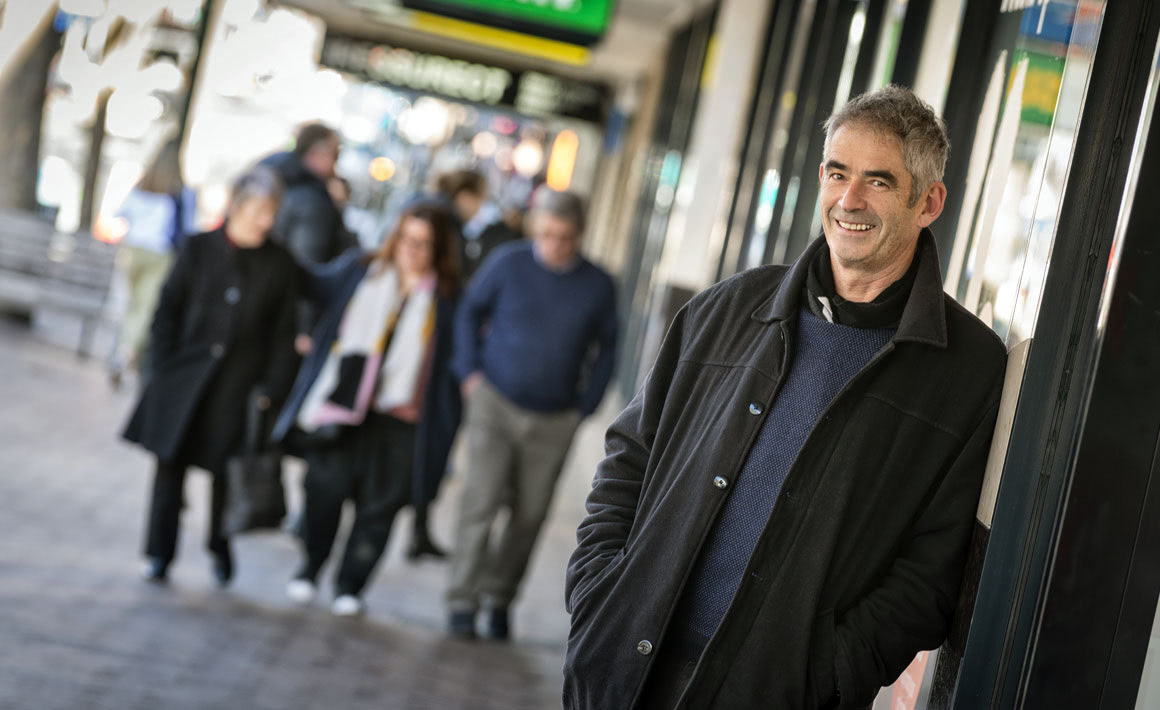 Professor Parry Guilford: “It means oncologists can think about doing new things and be cleverer about how they treat patients… The old paradigm of standard first-line, second-line and third-line treatments can be revised.”

Professor Parry Guilford is leading a game-changing project to investigate the potential of ctDNA technology to better detect and treat New Zealand’s most prevalent cancers.

Tracking cancer progression and the effectiveness of treatment has traditionally involved the use of expensive imaging technology such as CT scans, but University of Otago researchers are trialling the use of circulating tumour DNA (ctDNA) as a minimally invasive biomarker for cancer surveillance.

Led by internationally renowned cancer genetics and biology expert Professor Parry Guilford (Biochemistry), the Healthier Lives National Science Challenge project is focused on DNA spilt into the bloodstream from a tumour, which can then be detected by the presence of DNA sequence mutations.

While the technology has been slowly developing overseas for many years, Guilford says it has been brought to New Zealand as part of a huge international initiative.

“Everyone’s using modifications to suit their own country’s problems and testing different applications.”

Currently Guilford and his colleagues are measuring ctDNA level changes to trace the progress of individual patients with colorectal cancer, breast cancer or melanoma – cancers for which New Zealand has amongst the highest rates in the world.

“By using it as a biomarker for tumour burden and drug response you can quickly assess when a drug is working and when it’s not working.”

Guilford says it also means patients can avoid so-called futile treatment – unnecessary chemotherapy that is ineffective for that tumour.

“Not only is the patient having to go through unnecessary side effects, but it is also a cost on the health system. And all the while the tumour is still growing, making it more complex and harder to treat.”

ctDNA can also allow them to track markers for emerging drug resistance and see subtle changes in disease progression.

“If, by using a simple blood test, we can find cancers early enough to be cured by surgery then we can transform cancer survival rates In the Pacific. That, amongst others, is one of our dreams.”

“It is at the forefront of personalised medicine,” says Guilford. “It means oncologists can think about doing new things and be cleverer about how they treat patients. They can move away from standard population-based treatments to a more personalised approach. The old paradigm of standard first-line, second-line and third-line treatments can be revised.

“You can start individual treatment knowing if it doesn’t work you’ll see it pretty quickly and can change to something else. It means oncologists can become much more nimble when treating patients. Nimbleness is critical when up against a highly adaptable system. And cancer, If nothing else, is highly adaptable.”

Reducing inequities is one of the big themes for the Healthier Lives Science Challenge. ctDNA technology, using blood tests, will allow easier long-term follow-up rather than people having to get to main centres every eight to 12 weeks for expensive CT scans, says Guilford.

It is anticipated that it will allow intervals between CT scans to be increased, with blood tests in between, providing better surveillance, while reducing travel costs for the patient and operational costs for the DHB.

Guilford says their clinical study is breaking new ground placing them right on the wave of what’s happening internationally.

“We’re applying it to our own problems, the cancers that are most important to us all, and our own clinical issues, which for us is keeping costs down and reaching populations who are financially deprived or geographically isolated.”

ctDNA technology will soon be used for screening, by finding mutations straight from the blood with no prior knowledge of what the mutation is.

Guilford was awarded HRC funding earlier this year to develop an in-dwelling device, to allow clinicians to feed a specially designed wire into a blood vessel for about 30 minutes to capture DNA.

“Taking an 8ml vial of blood will find DNA from an early stage tumour about a quarter of the time. That’s useful, but the DNA capture device we’re working on with our collaborators at the University of Auckland will have many litres of blood pass over it in 30 minutes. Therefore it should have exceptional sensitivity for the detection of small cancers which can still be cured by surgery.”

Guilford and his University of Otago Wellington colleague, Dr Dianne Sika Paotonu, are now working on applying ctDNA technology to remote locations such as the Pacific Islands where currently there is little opportunity to treat advanced cancer. “If, by using a simple blood test, we can find cancers early enough to be cured by surgery then we can transform cancer survival rates In the Pacific. That, amongst others, is one of our dreams.”

Next:
Oceans and oxygen