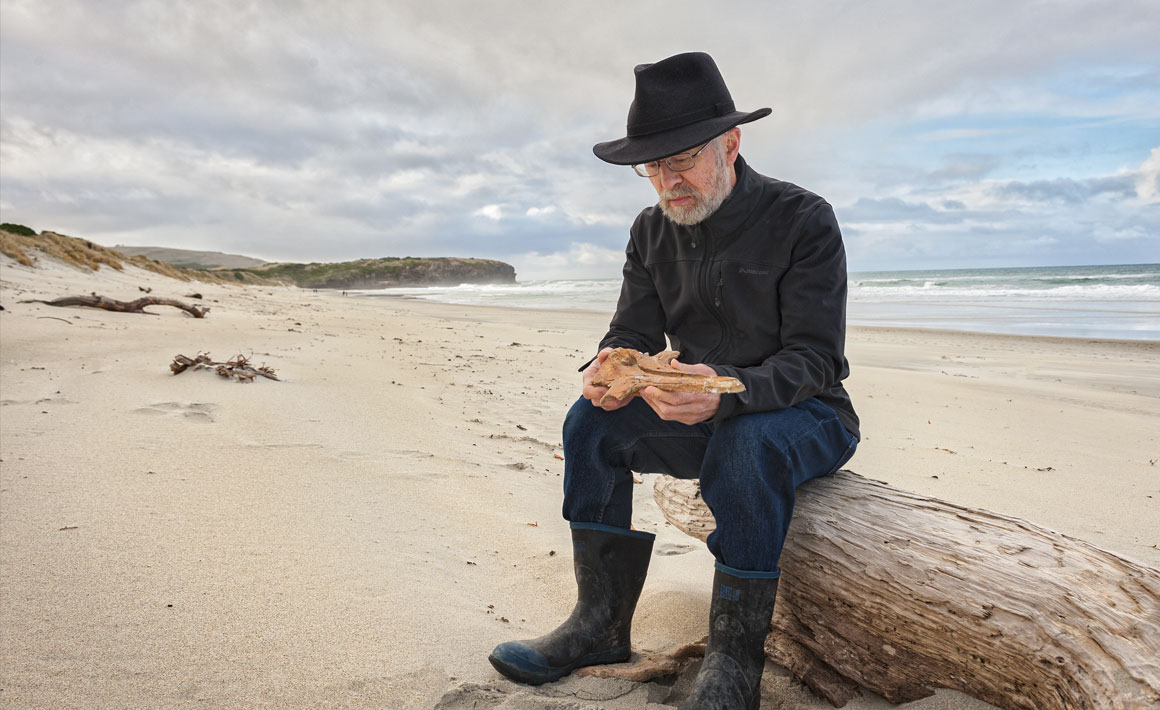 Professor Ewan Fordyce: “What is now New Zealand was submerged 20 to 23 million years ago, with sediments accumulating fairly slowly and constantly to give an excellent fossil record.”

A project exploring the “dark age” of whale and dolphin (Cetacea) history seeks to uncover the mystery of the earliest “modern” cetaceans and plug the gap in the global fossil record.

In a country where almost half the world’s living whale and dolphin species are found, it seems fitting that New Zealand now holds the key to unlocking a global “dark age” in whale evolution where the world’s fossil record is silent.

The Marsden-funded project, Fossil Cetacea of Zealandia, seeks to investigate this “dark age” 20 to 23 million years ago and solve the issues from this period. Palaeontologist Professor Ewan Fordyce, from the University’s Geology Department, says they predict this gap was a time when “many modern lineages started to diversify”.

“Before this gap, cetacean assemblages were dominated by archaic species; afterwards, modern forms appeared and diversified,” he says. “What happened during this crucial time remains a profound mystery, limiting our understanding of cetaceans as drivers of ocean ecology. Zealandia is one of few places globally that can provide the evidence needed to plug the gap.

“We expect that New Zealand strata, to be explored with [Marsden] grant support, will provide the hard evidence of events – fossil bones. We have some relevant fossils already, but most have yet to be removed from encasing rock. Our lab programme will prepare and free the fossils from their matrix, allowing study and interpretation. We will also prospect for bones at field localities known to have rocks of the right age.”

Preliminary fieldwork in the South Island has recovered unprepared fossils of the right age and has identified other material not yet collected. These fossils will be crucial to reveal the diversity, phylogeny and ecology of the earliest “modern” cetaceans, and illuminate the origins and deep-time history of their living descendants.

“Before this gap, cetacean assemblages were dominated by archaic species; afterwards, modern forms appeared and diversified. What happened during this crucial time remains a profound mystery…”

Fordyce’s team includes a fossil preparation technician, and associate investigators (and former students) Dr Felix Marx, from the Royal Belgian Institute of Natural Sciences (Belgium) and Monash University in Australia, and Dr Yoshihiro Tanaka from the Osaka Museum of Natural History in Japan. Later, the team will be helped by a part-time assistant technician and postdoctoral fellow.

The team plans to prepare the backlog of bone-bearing rock samples, especially those containing skull remains. Skull structure is an important guide to identification, relationships and lifestyle. And palaeontologists should remind themselves that the fossil skulls are from once-living hot-bodied individuals, hot bodied like us.

“The lab work is underway to prepare rock samples in which we can see parts of fossil skulls and other parts of the skeleton,” Fordyce says. “Most of the fossils are delicate, a bit like high-quality pottery – they hold together, but shatter if dropped. We usually make a plaster cradle for each fossil, to hold it securely and protect against damage.

“The lab work will allow us to extract three-dimensional bones that can be used to identify species and lifestyle. And, as time and access permit, we will explore for more material from targeted rock sequences around the South Island.”

He describes New Zealand as “a sort of Rosetta Stone for Southern Hemisphere fossils”.

“Our fossil sequence for the last 80 million years is relatively continuous and reliably dated using special indicator species to determine the age. What is now New Zealand was submerged 20 to 23 million years ago, with sediments accumulating fairly slowly and constantly to give an excellent fossil record.”

And because the fossiliferous rocks are widespread around New Zealand, they promise new discoveries.

“The extracted fossil bones should give us a better idea of the diversity of species, their relationships and their ecological role, and will help us understand the rise of the early modern cetaceans 20 to 23 million years ago.”