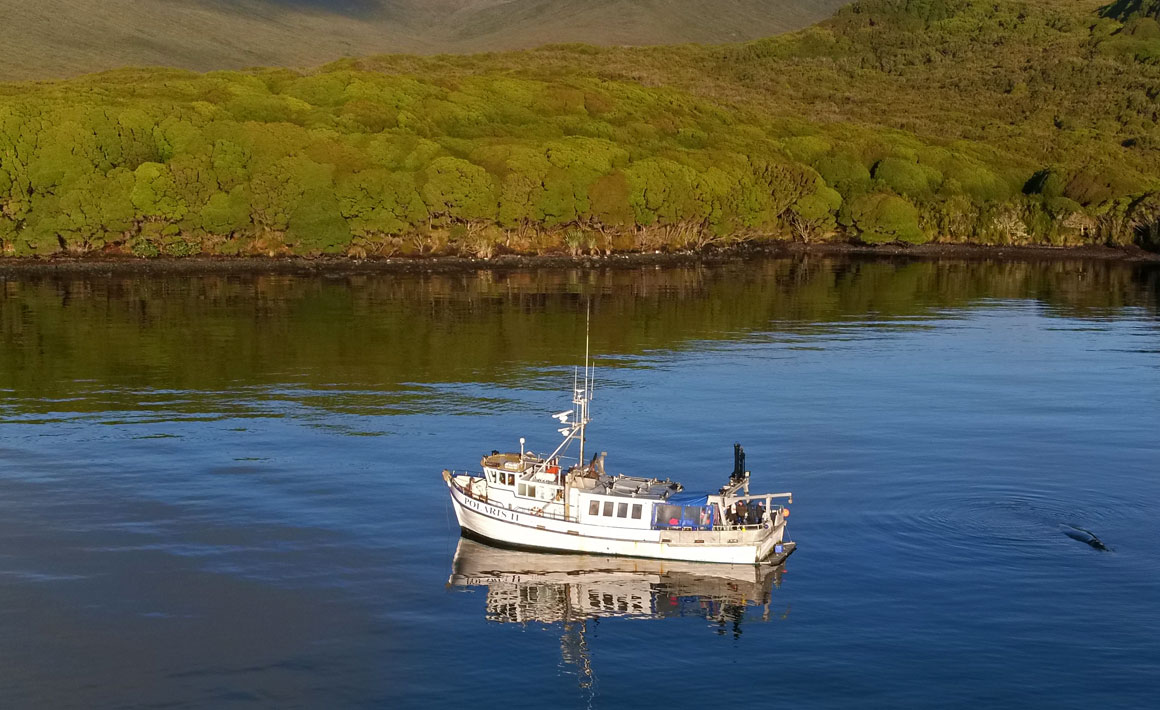 The sub-Antarctic Auckland Islands are attracting Otago scientists searching for evidence of past climate events that might help forecast the future – and those monitoring the magnificent southern right whales who return to the islands’ waters each year to breed. 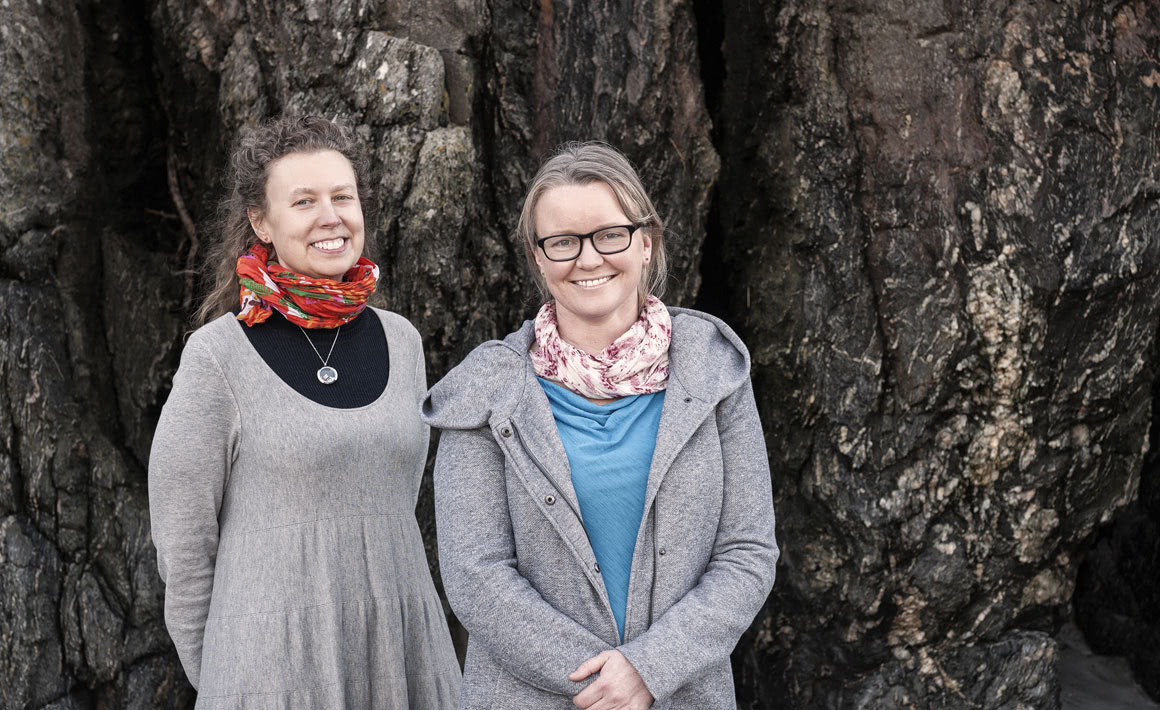 Professor Christina Hulbe and Emily Tidey: “With modern technology, we can get this fine, crisp, detailed imagery of the seabed, where we are getting down to centimetres.”

Hidden geographic records of past climate events have been uncovered by Otago scientists working in the Auckland Islands.

Emily Tidey (Surveying) doesn’t always keep her feet on the ground while working: her work includes voyaging 600-kilometres south from Dunedin to the remote, rugged and windswept Auckland Islands aboard the largest of the University of Otago’s research vessels, RV Polaris II.

Tidey, a hydrographer who has worked on projects around the world, is interested in what lies beneath the waters surrounding the islands and what it can tell us about the past.

She explains that the RV Polaris II and other vessels worked the water like a lawnmower, running back and forth along slightly overlapping swathes on the sheltered east coast of the Auckland Islands, while onboard high-tech echo-sounder and sonar equipment captured the shape and texture of the seafloor.

“This is the furthest north record yet established of extensive sub-Antarctic glaciation. The ice was pervasive and extensive, filling all of the eastern fiords.”

Back at the School of Surveying in Dunedin, Tidey combined her bathymetric seafloor data – and similar information gathered on behalf of Land Information New Zealand – with existing measurements of the islands’ topography.

Working with glaciologist Professor Christina Hulbe (Surveying), Tidey evaluated this information in the context of glaciation during the most recent Ice Age, about 20 thousand years ago, highlighting the effects of glaciation on the land and seafloor, including classic U-shaped glacial valleys and well-preserved underwater terminal moraines.

In the process, she produced a complete, continuous picture of land and seafloor, expressed in information-packed maps.

“This is the furthest north record yet established of extensive sub-Antarctic glaciation,” Tidey says. “The ice was pervasive and extensive, filling all of the eastern fiords.”

She says that some sections of the seabed had never been mapped before, revealing multiple submerged glacial features for the first time, while advances in marine mapping technology meant that the known features have been imaged in more detail.

“With modern technology, we can get this fine, crisp, detailed imagery of the seabed, where we are getting down to centimetres,” Tidey says. All of the readings had to be carefully adjusted to take account of changes in tides, and even the rise and fall and rocking of the vessel in the ocean swells. 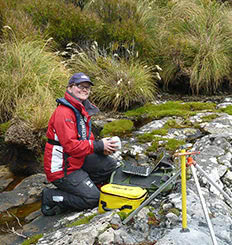 “This is the first analysis of detailed seafloor geomorphology in the area. Exploration is the first part and can not only tell us about the past environment, but also intelligently informs where we might go to undertake new studies, such as coring, to understand past paleoclimate and past glaciations, rather than blindly rushing into a fiord and taking samples.”

Tidey adds that the University’s planned new research vessel to replace the Polaris II will be a boon to future studies, likely enabling research to be undertaken in rougher waters, such as those on the unexplored, exposed, western sides of the sub-Antarctic islands.

Articles co-authored by Tidey and Hulbe on their Auckland Islands research have recently been published in Antarctic Science and Geosciences. 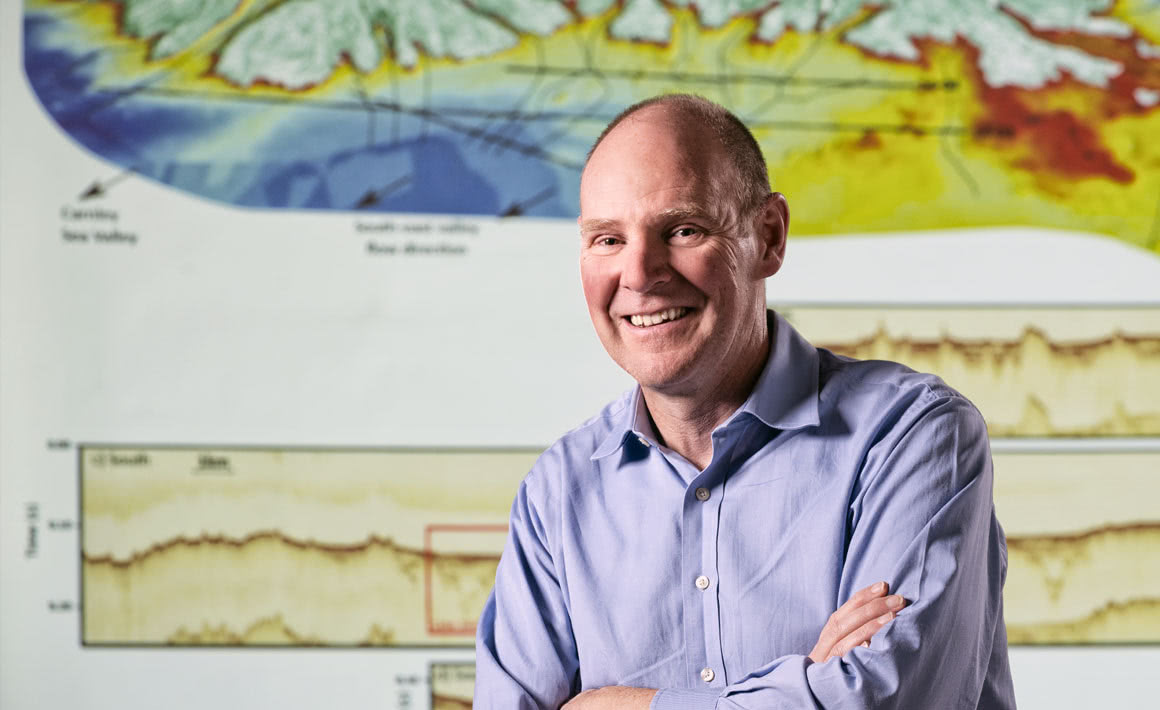 Associate Professor Andrew Gorman: “We can put together cross-sectional pictures of the rock below the seafloor in the same way that a medical ultrasound image shows slices through a body.”

Associate Professor Andrew Gorman (Geology) has been visiting the sub-Antarctic islands for more than a decade, not to see what is on the land or even on the seafloor, but to image what’s below the seabed.

Gorman is interested in what the built-up layers of sediment can reveal about past changes in climate and sea level in the sub-Antarctic islands, where sediments are particularly good at preserving information from the past.

During two trips on the RV Polaris II to Campbell Island, 750 kilometres south of Dunedin, and two more recent voyages to the Auckland Islands, Gorman had the vessel tow high-frequency seismic imaging equipment behind it.

“We generate sound for our surveys using a ‘boomer’ seismic source: it is basically a big bass speaker that gets towed behind the Polaris on a pontoon,” Gorman explains.

“That sound radiates out in all directions, but some penetrates into the seafloor and echoes off different geological boundaries in the sub-surface, and we record those echoes using an array of hydrophones – which work like microphones in the water – that we tow behind the boat.

“We can see evidence from the not-too-distant past of how natural global warming affected the islands at the end of the last Ice Age and from there we can try to extrapolate what will happen in the future with man-made climate change.”

“With those recorded echoes, we can put together cross-sectional pictures of the rock below the seafloor in the same way that a medical ultrasound image shows slices through a body.”

Gorman points out that the further down you go in distance, the further back you go in time: he has gone to depths of up to 200 metres and back in time at least half a million years.

He says that the high-resolution images of the layers of sediment that have accumulated over time are invaluable in guiding colleagues to the best locations for collecting geological samples from the seafloor: by using a grab to gather material or by drilling to retrieve core samples.

The seismic information also provides a way of tying these samples to the processes that deposited them, notably during Ice Age conditions and the warmer periods in between.

Gorman says that such information is critical for better understanding past climate changes, and constructing models and making forecasts of future changes in climate and sea levels.

“I am interested in looking at the climate signal that is preserved in sediments. We can see evidence from the not-too-distant past of how natural global warming affected the islands at the end of the last Ice Age and from there we can try to extrapolate what will happen in the future with man-made climate change.”

Gorman acknowledges the contributions of three postgraduate students in particular – Hamish Fraser, Ben Ross and Ted Perkins – who have all ventured south and undertaken seismic research as part of their studies. 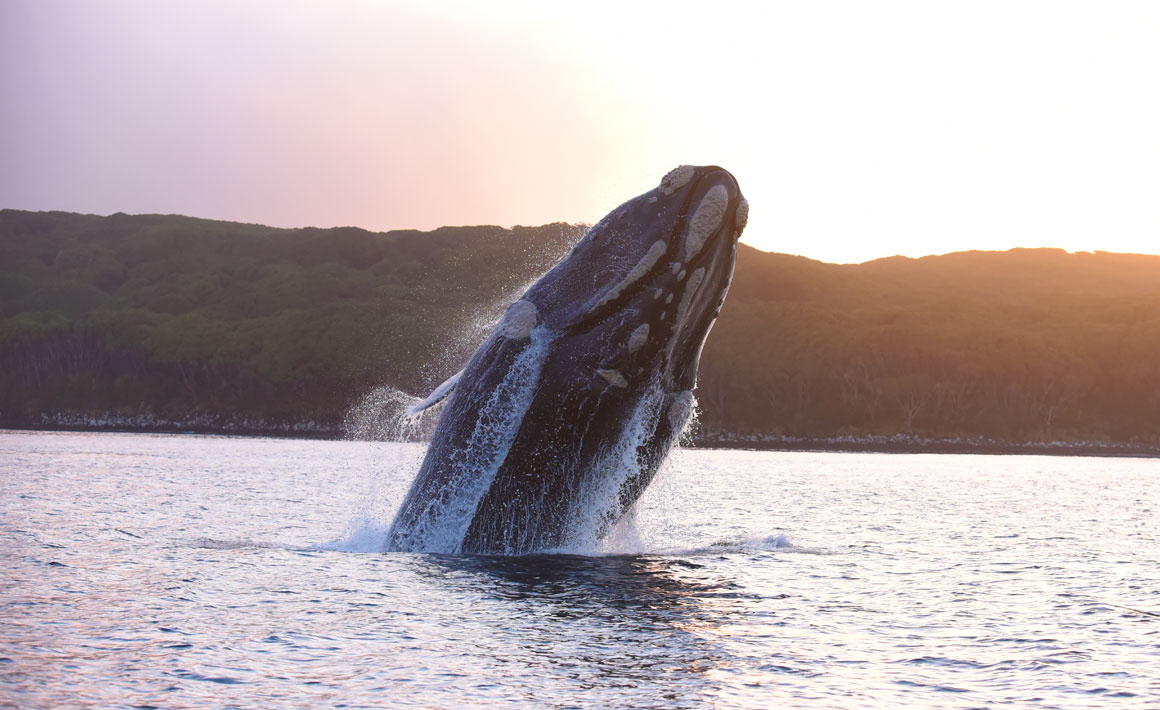 By monitoring the condition of southern right whales in the waters around the Auckland Islands, Otago scientists are learning about the health of the Southern Ocean as well.

Rayment first ventured to the Auckland Islands a decade ago to study southern right whales in their winter breeding ground in Port Ross. He explains that this included identifying individual whales by taking lateral photographs of the unique patterns of callosities (patches of keratin infested with harmless whale lice) on their heads.

He and Dawson then became interested in using high-quality aerial photographs taken from drones to measure whales and track their changing body conditions over time. Put crudely: the fatter the body, the heathier the whale.

With help from Hamish Bowman (Geology), the team developed a “datalogger” to record the altitude of the camera to within two centimetres. “This sets image scale, so enables absolute rather than relative measurements,” Dawson says. “Software written by postgraduate student Eva Leunissen completes the system.”

Dawson and Johnston share the drone piloting duties: Dawson holds a commercial drone pilot’s licence and had previously built his own drone from scratch.

The researchers say that their near-silent drone, hovering about 25 metres above the whales, causes no behavioural changes and is used in accordance with a Department of Conservation permit.

Dawson explains that this “photogrammetry” research has led to studies of the relationship between the condition of the whales when they arrive at Port Ross from their feeding grounds in the Southern Ocean and their food supply.

“Clearly the whales’ condition when they arrive at the breeding grounds is going to have a lot to do with how successful their breeding is, but their condition also potentially tells us about the health of the Southern Ocean.”

Rayment says that the population of southern right whales in New Zealand’s extended waters – where they were once hunted to near extinction – is increasing by five to seven per cent a year, to more than 2,000 at last estimate; and he says that we can expect to see more of the migrating mammals around mainland New Zealand in future. 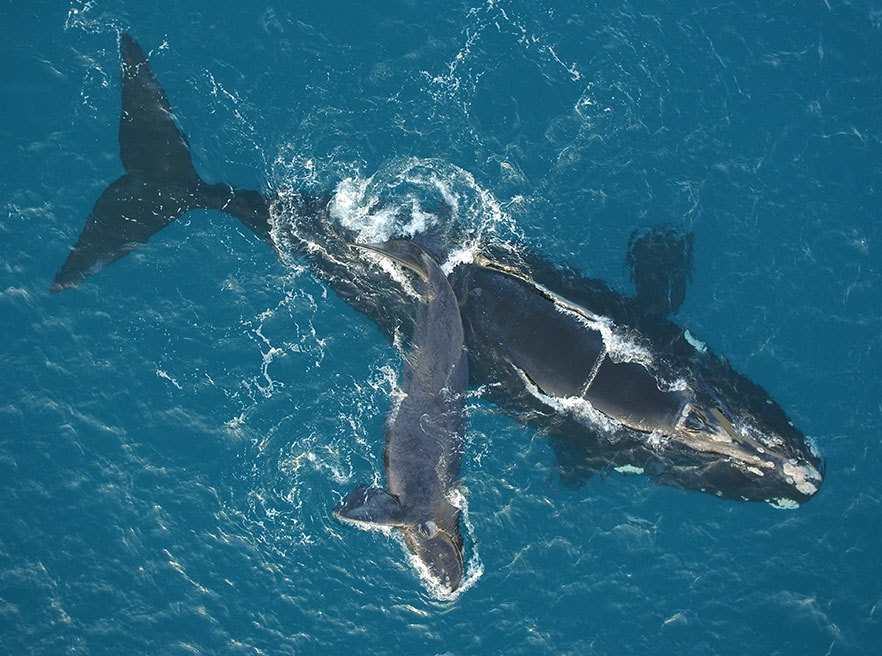 High quality aerial photographs make it possible for researchers to measure and track the whales. 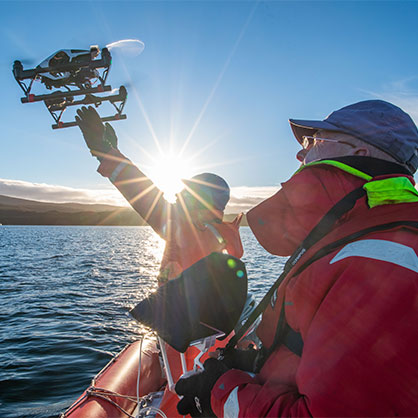 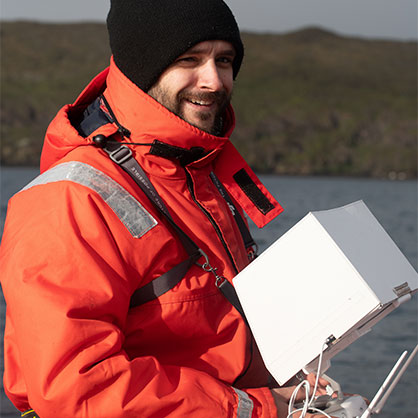