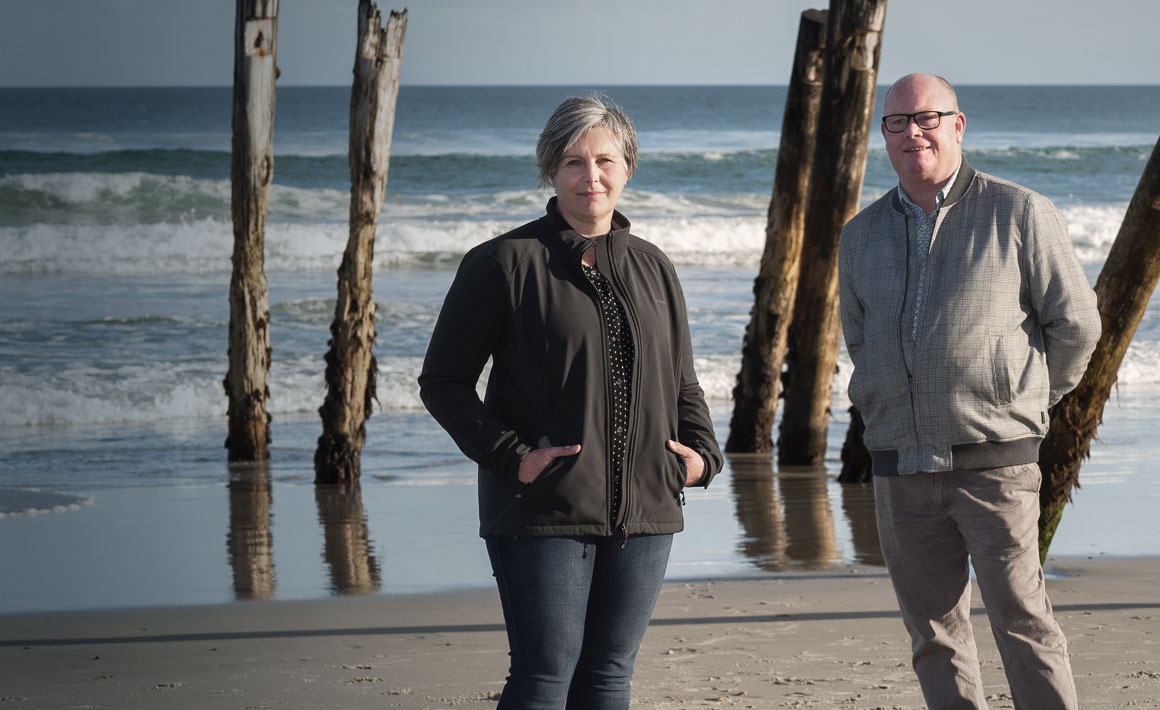 Dr Karen Greig and Professor Richard Walter: “We have been working with indigenous communities … to develop methods and systems for those communities to monitor and manage their significant cultural heritage places themselves.”

Otago archaeologists are leading a grassroots approach to the management of threatened heritage sites here in New Zealand and the Pacific.

Professor Richard Walter and Dr Karen Greig (Archaeology) are partnering with indigenous communities to develop community-based programmes for the management of coastal heritage sites under threat from nature and people.

Walter explains that the majority of archaeological sites around the world are coastal: in New Zealand, more than 90 per cent lie within a kilometre of the coast.

However, many of these sites are coming under threat from climate change and the attendant sea-level rise and increasing frequency and severity of storms; from natural hazards such as the Kaikoura earthquake; and from development activities such as horticulture and forestry, and earthworks associated with infrastructure and housing subdivisions.

“So, we have been working with indigenous communities in New Zealand and the Pacific to develop methods and systems for those communities to monitor and manage their significant cultural heritage places themselves,” he says.

“In New Zealand, we have been working with Māori communities on the East Coast of the North Island and elsewhere, developing iwi-based and marae-based initiatives for training, resourcing and building capacity for people to look after their heritage places: to record them and to conserve them.”

Greig cites the example of one project in Hawkes Bay that has involved a series of hui and workshops, the development of a digital tool kit and field training to enable marae-based groups to carry out their own recording and monitoring of sites. “A lot depends on what those communities want to know and the skills they need to achieve those ends,” she says.

“The project started pulling together these interested groups and began the process of systematically surveying the coastline,” Greig says.

“Archaeologists and iwi representatives walk the coastline, visiting recorded sites on a five-yearly rotation, making notes about their condition, monitoring changes and targeting threatened areas for archaeological excavation, some of which have generated information about human adaptation to the environment that we didn’t know before.”

A similar grassroots philosophy in being applied to village-based cultural heritage management projects in the Pacific.

“We have found that the indigenous communities are more concerned about cultural heritage conservation than they are about biodiversity, so our programmes are highly sought after.”

“There, the impacts are mainly to do with international forestry and mining companies, who are impacting very heavily on coastal sites and the archaeology of indigenous communities,” Walter says. “So, we have been running training and awareness programmes in various parts of Melanesia, often in collaboration with large conservation organisations.”

In the Solomon Islands, they have been working among coastal communities in partnership with The Nature Conservancy, focusing on the Arnavon Islands, the country’s first nationally-protected area, which includes an important and at-risk archaeological record.

“We have found that the indigenous communities are more concerned about cultural heritage conservation than they are about biodiversity, so our programmes are highly sought after. We have been delivering workshops and awareness hui on request in many provinces throughout the Solomon Islands.”

Walter and Greig are undertaking the various projects as co-directors of Southern Pacific Archaeological Research, a research unit within the Archaeology Programme at Otago, with help from their small team of research assistants and associates.