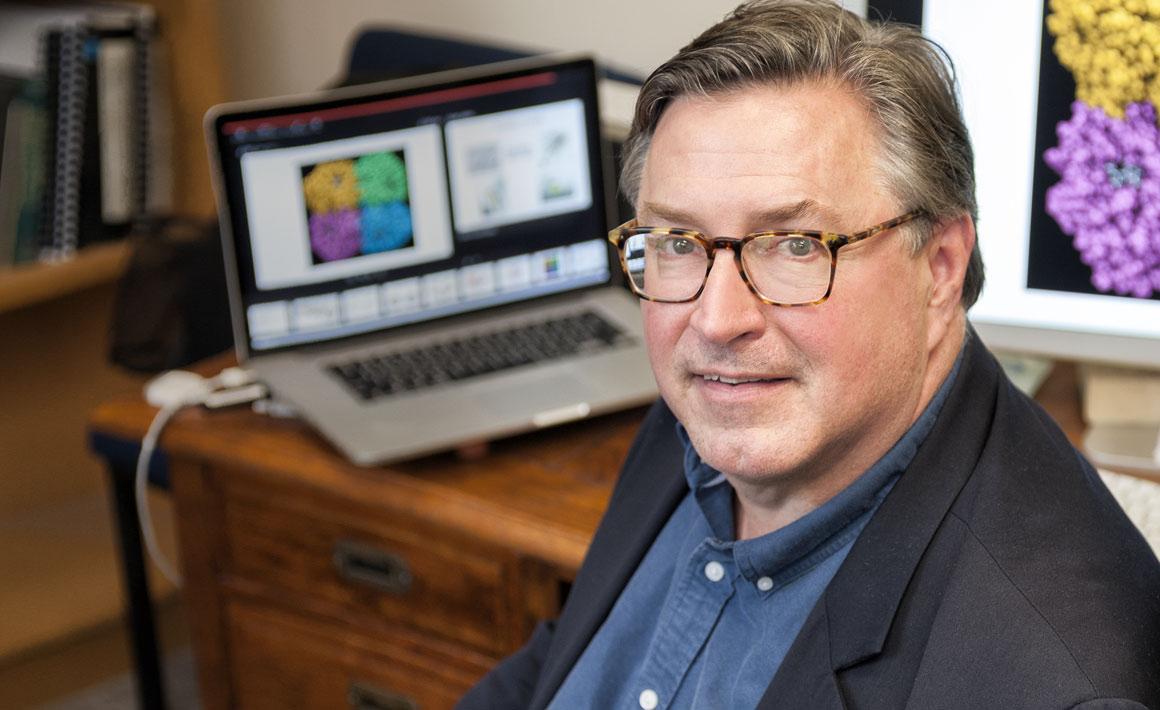 Professor Kurt Krause: “I believe that we will end up putting together a cocktail of medicines that can be used to treat coronaviruses, kind of like the cocktails put together for HIV.”

Teams led by virologist Professor Vernon Ward and structural biologist Professor Kurt Krause are drawing on their extensive experience and expertise to find ways to beat the SARS-CoV2 virus.

When asked how different SARS-CoV2 – the virus behind COVID-19 – is to other viruses he has seen before, virologist Professor Vernon Ward (Microbiology and Immunology) describes it as something new on a familiar framework. 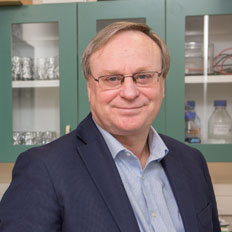 Professor Vernon Ward: “So the question is – will there be a magic bullet come out of the existing compounds or do we need to develop specific targeted compounds? I suspect it is both.”

“As a virus and how it behaves it is clearly its own thing, but there’s a lot of similarity to the earlier SARS – they call it SARS-CoV2 for a reason. But it’s clearly a lot harder to deal with than the original SARS,” he says.

“The thing to remember is, despite the pace at which things are happening, there is still so much fine detail we don’t know about the virus and that fine detail can make big differences.”

Ward is one of a large number of Otago researchers from across the University trying to shed more light on that fine detail in a push to beat the SARS-CoV2 virus and the COVID-19 illness it causes.

His own laboratory is working with renowned medicinal chemist Professor Dame Margaret Brimble, (University of Auckland) to identify potential antiviral drug targets for which her lab can create compounds to form the basis of new drugs.

A virus can be targeted in a range of ways, from stopping it attaching itself to cells and getting into them, through to blocking it from producing its proteins and genome once it enters the host cell.

When scientists look to formulate antivirals to RNA viruses they tend to look at two key targets on a virus first - the RNA polymerase and the protease.

In basic terms, the virus uses the polymerase enzyme to make copies of its genetic material as it takes over host cells. This is a target for antiviral drugs such as Remdesivir.

The other major target is the main protease 3CLpro (Mpro), an enzyme that precisely cuts a long protein produced by the virus when it replicates into a number of active separate functional proteins.

“There’s no real surprises in what a lot of researchers are targeting first – they’re the obvious things because they are specific to the virus, critical for virus replication and are different to the host,” says Ward.

But, he warns, it is likely multiple drugs will be needed for efficacy and because it is often easy for resistance to develop to a single drug.

“So the question is – will there be a magic bullet come out of existing compounds or do we need to develop specific targeted compounds? I suspect it is both. We will find drugs that help and new drugs will be needed in combination as they become available.”

Ward is already leading the MBIE-funded New Frontiers in Antiviral Development project, which began last year, and has started a project looking at 3CLpro protease of SARS-CoV2.

“My lab is making that protease and running assays on it. Then we’ll start developing and testing compounds that are designed – based on protein structures – to target that critical part of the viral lifecycle.

“We’re taking the approach that sooner or later there is a reasonable chance we will need to have something specifically designed for this virus, rather than repurposed from something else.”

Meanwhile, they will also undertake a longer-term project focusing on the polymerase looking at different approaches to targeting how the virus replicates its genome.

Once they have a likely target and compound to use on it, they turn it over to structural biologist Professor Kurt Krause (Biochemistry) and his lab to evaluate, using X-ray crystallography.

This technique allows them to examine these viral proteins at an atomic level to see how well the antiviral compounds bind to them. They can then understand how to improve them so they can do an even better job of blocking the virus from functioning.

For Krause, the emergence of SARS-COVID-19 has taken him back to when he first did his medical training in the United States and found himself caring for some of the first HIV patients.

“We had patients with a disease we didn’t understand and they were coming in quite ill and they were dying. Generally all the patients I encountered in this period died within six months of having met them, so we were frantically trying to figure out what to do and how to help people.”

Many early treatments failed, but some showed promise and they learned the best way forward was through the results of controlled trials, developing antiviral cocktails that allowed people to reach an undetectable viral load and to lead a normal life. It was that work which led Krause to getting into antiviral research.

One of the things this HIV research taught him was that vaccines take a long time to develop and don’t always work.

“Three decades on there’s still no HIV vaccine and we don't seem much closer to getting one. Vaccines don’t always work for some viruses.”

Krause says other treatments are therefore needed, such as direct-acting antivirals or even convalescent sera where antibodies from blood donated by people who have recovered from the illness are used to boost the immune response of people who are battling the virus.

“I believe that we will end up putting together a cocktail of medicines that can be used to treat coronaviruses, kind of like the cocktails put together for HIV.

“Margaret Brimble has an international reputation for her creative synthetic chemistry and her ability to synthesise proteins and peptides, so Vernon and my lab will be testing them and feeding back into her work with any suggestions that we have,” he says.

“Once we have identified nice tight binding compounds, they can be tested against viral growth in the PC3 lab. So, the cycle will involve making them, testing them against the viral proteins themselves, followed by testing them directly against the SARS-CoV2 virus.”

Krause is full of praise for the PC3 containment facility used to isolate local samples of COVID-19 and the foresight that went into setting it up in 2013.

“Without the PC3 lab we couldn’t be doing this work.”

Next:
Genomic clues to virus spread