“Putting new things, in new places, with new technology” is the off-the-cuff mantra from Dr Tim Molteno (Physics) as he talks about the electronic animal-tracking tags he is developing in association with Associate Professor Phil Seddon (Zoology). 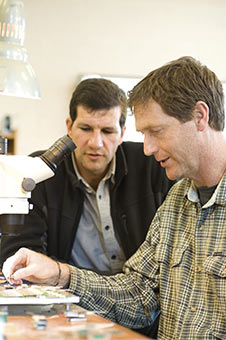 The tags are being used to track the foraging areas of the northern royal albatross, showing how this relates to the activities of commercial fishery vessels. They are also being used to monitor the movements, survival, dispersal and habitat selection of threatened native bird species – kaka, pateke (brown teal) and weka.

It has been an unexpected, but successful, three-year collaboration for them both, although it has had its surprises. While the electronics has come on in leaps and bounds in terms of reducing weight and increasing battery life, one of the unanticipated challenges has been packaging, Seddon explains.

“You can get the electronics to work, but you’ve got to stick it in a package that is going to survive the deployment on these guys that dive underwater or scrape through vegetation or, in the case of kaka, pick at it.”

It has to be light, less than three per cent of bodyweight, especially for use on a seabird. Commercially available GPS units usually weigh 50-70 grams, compared to the ones they are developing which are just 10-20 grams.

“You couldn’t let smaller species, weighing less than a kilo, carry more than that because you start to change the very behaviour you’re trying to monitor,” says Seddon.
Molteno and his team experimented with moulded plastics, but ran into unanticipated challenges.

“The kaka is like a shredding machine. It’s got a beak like a pair of side cutters,” he says. “Eventually we developed a pressure-moulded, oven-baked, carbon fibre packaging system. They are very light, very strong and kaka-proof.”

At the same time, they have developed the internal electronic technology, including solar cells that are about four times more efficient and systems that use much less power for recording GPS information.

That all important data can be downloaded over the cellphone network, for example, when a royal albatross returns to the Taiaroa Head colony where there is ample coverage.

Molteno says the tracking tags are like  little blackbox flight recorders so, if an albatross is on an 800km flight out towards the Chatham Islands, the device comes on briefly every 10 seconds.

“They only have to be awake for a thousandth of a second. A traditional GPS has to be awake for up to 30 seconds before it can get a fix, therefore we are using around 30,000 times less power, so you can run it off something like a watch battery.”

The resulting tracking maps are fascinating, showing the movements of up to 10 birds from the colony as they fly over the Pacific at up to 100kph.

Their focus now is to push the technology further, says Seddon.

“If you can get deployments for months or even more, all sorts of things become possible. For example, maybe seabirds change their foraging strategy as their chicks get older? That is one of the things we would like to study with yellow-eyed penguins in the next research phase.” 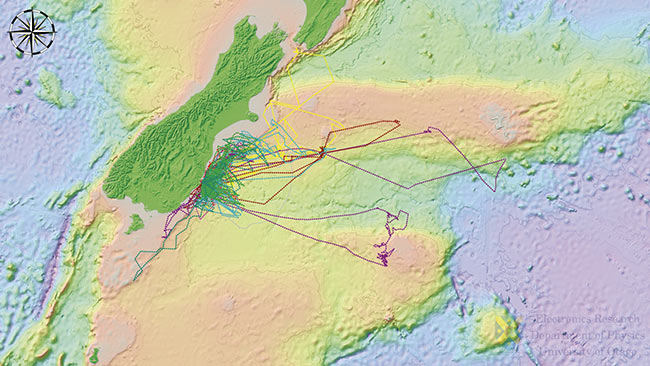 The tracking tags use 30,000 times less power than traditional GPS.