The bottom of a pristine West Coast lake has revealed secrets that have huge implications for the way we plan for the effects of large earthquakes along the South Island’s Alpine Fault. 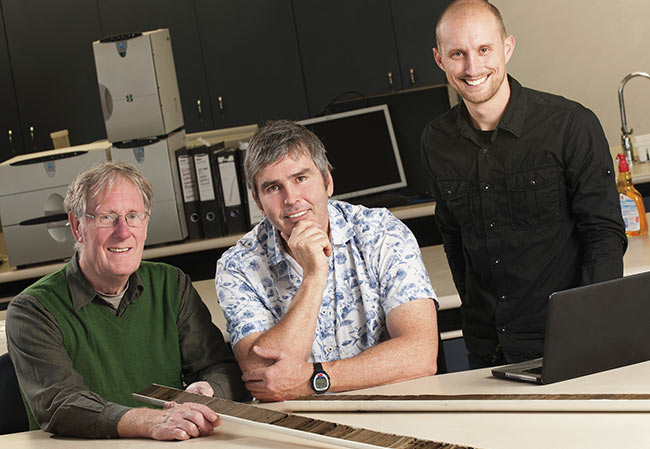 Working from a boat, Fitzsimons and Howarth, with help from various field assistants, used compressed-air operated equipment to drive a tube six metres into the sediment on the bottom of Lake Paringa and extract core samples to reveal the timing and impact of previous large earthquakes (those above magnitude 7.6). The equipment worked like a time machine: as they cored down six metres they went back through about 11 centuries of sediment.

The research has proved, in what Fitzsimons describes as “a fairly spectacular fashion”, their conceptual model that the lake sediments, in effect, are nature’s seismograph and erosion monitor. By analysing and radiocarbon dating the samples, the team has built up the most precisely dated historical record of large earthquakes on the central section of the Alpine Fault and post-quake landslides and erosion.

The research has confirmed the ages of the last five large earthquakes that have occurred in the area over the past 1,100 years. The good news for West Coasters is that these large ’quakes occur infrequently – an average of every 260 years – although the probability for the next one remains high. It’s been 295 years since the last one in 1717.

More significantly, the research reveals that the landscape remains in a very disturbed state for much longer than assumed. The extensive landslides triggered by large earthquakes continue to cause very high rates of erosion for an average of 50 years after each ’quake. “I think that’s one of the big take-home messages from this, that it’s just so long,” says Fitzsimons.

The research team believes that this may hinder the rebuilding of vital infrastructure – such as roads, bridges and powerlines – long after the next large earthquake and so threaten economic recovery in the West Coast region. Fitzsimons says agricultural areas on the floodplains would also probably be buried and townships such as Fox and Franz Josef, which are almost adjacent to the Alpine Fault and are built on alluvial fans, would be at risk.

“The financial impact on the West Coast region could be considerable,” says Howarth. “As nasty as the Christchurch earthquakes have been, five years down the track we are going to be a long way to cleaning up that mess.

“The implications of this research are that, on the West Coast, there may be a residual impact for decades after the next big Alpine Fault earthquake.”

The research results have just been published in the latest issue of the Geological Society of America’s Geology, the top-ranked geology journal in the world. Fitzsimons says the task now is to communicate the results to organisations such as the West Coast Regional Council, the New Zealand Transport Agency, the Department of Conservation and the wider community.

Fitzsimons adds that access to funding and radiocarbon dating for this project is one of the more tangible outcomes of the University of Otago’s membership of the Australian Institute of Nuclear Science and Engineering, which is a consortium operated by ANSTO.