The Michael King Memorial Lecture was established in 2004 to commemorate the contribution of acclaimed writer Michael King to New Zealand history. 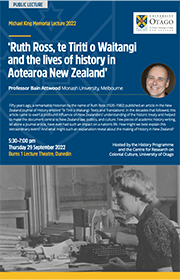 Fifty years ago, a remarkable historian by the name of Ruth Ross (1920–1982) published an article in the New Zealand Journal of History entitled ‘Te Tiriti o Waitangi: Texts and Translations’. In the decades that followed, this article came to exert a profound influence on New Zealanders’ understanding of the historic treaty and helped to make the document central to New Zealand law, politics, and culture.

Few pieces of academic history writing, let alone a journal article, have ever had such an impact on a nation’s life. How might we best explain this extraordinary event? And what might such an explanation reveal about the making of history in New Zealand?

2019    Dr Ali Clarke, 'The Historian’s Tale: Writing 150 years of the University of Otago’s history'
2018    Lizzie Marvelly, 'The Modern Suffragist'
2017    Professor Sir Richard J. Evans (Cambridge), 'War in the Nazi Imagination'
2016    Professor James Belich (Oxford), 'Hunt-driven expansion in New Zealand and Global History'
2015    Sir Tipene O’Regan, A W-anaka Without Walls: A K-ai Tahu Knowledge Base of Our Own
2014    Christopher Pugsley, 'The New Zealanders at Gallipoli - A Centennial re-assessment?'
2013    Professor Joanna Bourke (Birkbeck, University of London), 'Why are You Doing This To Me? Sexual Violence in the Past and Today'
2012    Grahame Sydney, 'Regionalism Forever: Reflections on My Backyard'
2011    Jeffrey Paparoa Holman, 'Weaving Stories<: Reflecting on the Writings of Elsdon Best and Tutakangahau'
2010    Jock Phillips, 'Constructing a Past: Hocken and the Memorialising of History'
2009    Tom Brooking, 'Tall Tales: Richard John Seddon and the Building of “God’s Own Country”'
2008    Brian Easton, 'Race Relations and the Economy'
2007    Sam Elworthy, 'Who Needs Books? Readers, Writers and Publishers in the Age of the Internet'
2006    C. K. Stead, '50 Years Ago: Some Images of the Young Poet and his Elders Brasch, Curnow, Sargeson'
2005    Michael Cullen, 'Two Ticks for Clio: Reflections on New Zealand Politics and History'
2004    Marti Friedlander, 'Photography as History'